Kiefer Sutherland of ABC's “Designated Survivor” on Playing a POTUS 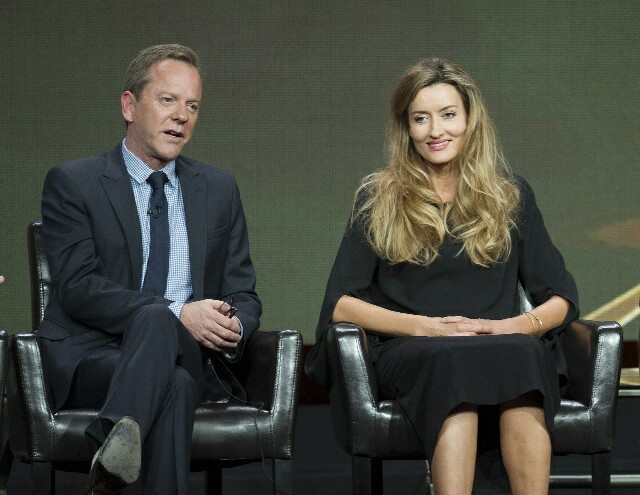 During nine seasons playing Jack Bauer on Fox’s “24” Kiefer Sutherland learned a thing or two about protecting the President of the United States. For his return to television in ABC’s much buzzed about political thriller “Designated Survivor,” Sutherland plays Tom Kirkman, Secretary of Housing and Urban Development and the country’s “designated survivor” -- a nominated member of the Cabinet assigned to fill the Presidential shoes in the event of a catastrophe that leaves the country without a leader. So how does the most famous protector of the free world leader feel about having the tables turned on him?

“I have never felt so short on a show in my life,” Sutherland (pictured at top with co-star Natascha McElhone) joked earlier today to journalists attending the Summer 2016 Television Critics Association Tour of his turn as a POTUS. “I have to be honest, one of the first scenes we shot was with my secret service man and he was huge! I remember him running in while we were watching the Presidential address and him taking my cell phone and bossing me around. I couldn't help but remember how that felt when I was doing 24.”

Sutherland also admits the one thing he hopes the show accomplishes is opening a dialogue with regard to what’s really important for the country.  The current election cycle, he said, “has become this name-calling showbiz spat and I don't see a lot of interest in that. Hopefully, in the context of our show, we'll be able to talk about things that are important and have maybe a more open discussion about it.”

Dennis Haysbert, who portrayed President David Palmer for several season on 24 (and will soon be seen in the upcoming Syfy series Incorporated) believes Sutherland will “do just fine” as TV’s next leader of the free world. “The only tip I could give him is to watch [24] again,” he told me. “It’s all in there.”