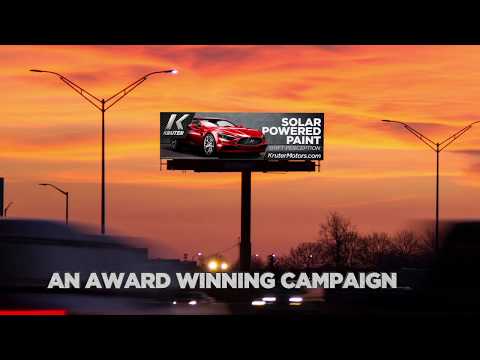 In this new world, personal cars are on our mind. They offer a safe way to remain socially distant and get out of our homes to experience life again. Personally, I am exchanging a 1998 Audi for a model from the 2000s (big move, I know) and I am not alone. A recent survey by Capgemini Research Institute showed that one-third of Washingtonians are planning on buying a car this year, 45% of who were Millennials. The automotive category has long used (overused) television advertising, so last spring OUTFRONT launched our own billboard campaign in Detroit for an "unreal"car, Kruter Motors, to attract the attention of the automotive community and prove the efficacy of OOH for the category.

We brought a single red auto model to Detroit. The Kruter car existed only in our minds and on 30 strategically placed billboards across Motor City. OUTFRONT STUDIOS designed the creative to be bold, boasting headlines on the verge of believability including: A.I. carpooling, solar powered paint, night vision windshield, perpetual motion mode, and zero drivers. All billboards included a call to action to visit krutermotors.com. Curious onlookers who visited the site quickly learned that the car would always remain a concept but their ability to impact customers with out of home had real potential—it worked on them, didn't it?

The campaign reached more than two million individuals over its two-week flight. A third party mobile survey revealed a 38% aided ad recall of Kruter Motors, which was 3% higher than the industry average. Let's dive deeper into that for a moment. Remember, Kruter Motors did not exist before this two week campaign. That means there was no prior brand equity or awareness. Additionally, this is a very rare instance where no other media channels were used. Therefore, we can clearly attribute the 38% ad recall to our 30 billboards. Unreal car, but real results.

It doesn't stop there. Of those who recalled the ad, 84% reported taking an online or offline action, like visiting the website, searching for the brand, or telling a coworker about the brand. Many of these respondents self-identified as Auto Professionals, our target audience. We saw that over 2,000 people visited the website, and spent an average of 48 seconds there, enough time to read all of the content. After two weeks, we adjusted the creative of the campaign to reveal the real campaign message: Billboards Build Brands. The same URL was used, updated to share the full case study. These results showcase the power of out of home to create brand awareness and drive web traffic.

The campaign also captured the eye of the advertising community. Kruter Motors recently won a Silver OBIE in the Self-Promotion category and was chosen as an OAAA Local Media Plan Finalist winner. This campaign, all about an unreal car, demonstrated the REAL impact of out of home. It is just one example of the success that can come from leveraging technology, location, and creative to deliver results and create meaningful connections with an audience. Reach people with out of home media this summer, as they spend more time outside with new appreciation, attention, and maybe even cars.

With over a decade of professional marketing, sales, and business development experience, Liz Rave serves as Vice President of Marketing at OUTFRONT. As VP, Rave oversees the OUTFRONT brand narrative and evolution, including all sub-brands. She oversees OUTF…