Kyle Richards on the Drama Behind "American Woman" 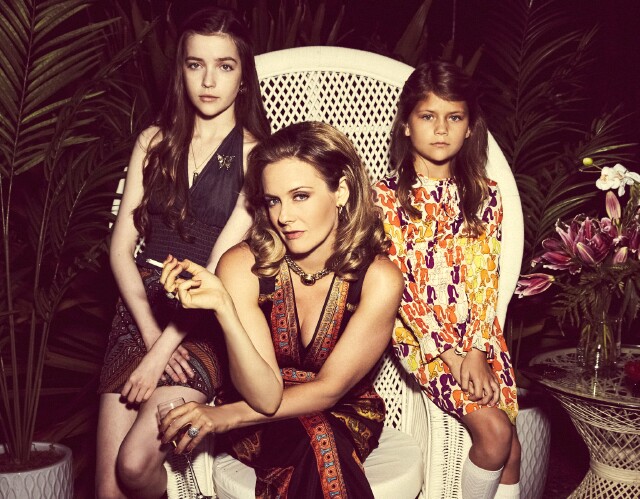 As one of The Real Housewife of Beverly Hills, Kyle Richards is accustomed to living a life on display, with all the insta-drama that entails.  So, when the Bravo franchise first made mention that she would be developing and executive producing a television series inspired by the experiences of her late mother Kathleen Richards, all hell predictably broke loose, most of it ignited by Kyle’s older sister Kathy Hilton, who made clear that she did not appreciate turning cherished childhood memories of their mom into entertainment fodder for the masses.  But after seeing the first episode of American Woman, which debuts tonight on Paramount Network, it became clear to all concerned that the family had nothing to worry about.  "I [really] think my family thought, 'What are you doing?’" Richards told MediaVillage during an interview to promote the series.  "But I'm only [telling the story] from my perspective.  I wasn't there to tell Kathy’s story or [my sister] Kim’s [Richards] story.  It was my story from my point of view and I was very respectful of that and will continue to be so."

Set in the Seventies – back when a woman couldn’t get a credit card or a mortgage unless a man co-signed on her behalf -- American Woman stars Alicia Silverstone (pictured at top center) as Bonnie, an affluent, happily married housewife raising her two daughters in Beverly Hills.  On the surface, Bonnie’s life appears charmed, one of lunches and cocktails with her dear friends Kathleen (Mena Suvari) and Diana (Jennifer Bartels).  However, her yearning for equal opportunity (and a checkbook of her own) has Bonnie thinking there could be more to life than what her real estate husband Steve (James Tupper) has provided.  When she discovers Steve is cheating on her, Bonnie opens the door to a new single life and quickly learns that adjusting to its reality will be more difficult than she imagined.  With no income, or discernable skills, Bonnie is forced to enter the male-dominated workforce of the era.

According to Richards, that's where the similarities end.  "My mom really was a woman before her time," she explained.  "In the '70s, it wasn't a popular thing to be a strong woman.  If you were strong and had a voice, you were thought of as a pushy broad where, nowadays, it's like ‘boss lady.’  My mom was a single mom raising three daughters on her own in a man's world.  We [had] amazing writers who fictionalized things, but there are many things that really did happen and circumstances that happened or things my mom [would] say, so you will see a part of my life along with fictional stuff.

"My mom was a very strong woman and an amazing mother because she loved her kids so much," she continued.  "Still, she was flawed.  She made mistakes, but you never forget how much you were loved, and I think that's very apparent in the Bonnie character.  Her friends [were] very important to her, too, as you'll see in the show.  But there are scenes where they say the dad did something really terrible, and I'm thinking, ‘Oh no!  My dad never did that!  I don't want people thinking my father did that!’  I’ve been teased several times for saying the show is ‘inspired by’ and not ‘based on’ [our lives] because the jumping off point of the show is my mom and her life, and [we] then go from there.”

Producing seemed a natural transition for the former child star, given she spent much of her early life in front of a camera with guest spots on series like Vega$, CHiPs, Fantasy Islandand Little House on the Prairie.  “I really loved doing Little House,” she said.  “I wasn't a normal kid because I didn't go to school and do the normal things that other kids did.  I'd been working since I was a baby so Little House gave me that sense of that.  We filmed in Simi Valley and I would ride horses and catch guppies in the stream, eat on a picnic blanket.  It was very much like a camp in a lot of ways with all the kids together in one room.  Michael Landon and Victor French were like fathers to me so that was a very positive and amazing experience growing up.  I never had a negative experience on any film or TV show I worked on.  I was around very loving, kind and creative people.”

As for wearing that executive producers cap, Richards admits her first time was a joy and one she credits Housewives with for making her so comfortable.  "I've learned a lot doing Housewives because essentially you are a producer," she explained.  "There are no writers [on that show], you're showing your life so you do learn a lot about the behind-the-camera stuff.  I brought that to the table for American Woman.  Still, a lot of it was learning along the way, but I loved it and it's amazing and a lot of fun to be behind the camera.”