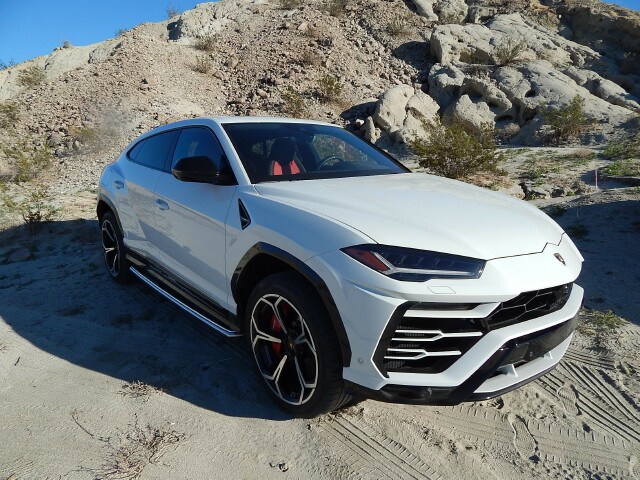 Palm Springs, CA -- Lamborghini, known for its high-performance supercars, is hardly a volume automaker.  It produced only 3,815 vehicles globally in 2017.  But, to hear Lamborghini Americas CEO Alessandro Farmeschi tell it, the company is poised to double in size.  And it’s doing so with an interesting hands-on marketing strategy.  The main catalyst for Lamborghini’s expansion is the Urus SUV, the company’s first sport-utility vehicle -- and its first four-door model, ever -- if you discount the Estoque sedan concept and the very low-production LM002 military/off-road vehicle (only 328 were built between 1986 and 1993).  Quite simply, Lamborghini is finally going mainstream, though staying firmly on the top end of the market.

The Urus has a Jekyll and Hyde personality, since it has everything SUV buyers expect, but also driving modes -- Sport, Corsa -- that turn it into a raging racer with a snarling exhaust, at home on the local Thermal Raceway.  Powered by a four-liter, twin-turbo, 650-horsepower V-8, it features 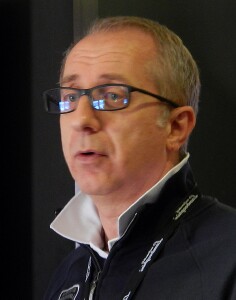 carbon ceramic brakes, four-wheel steering, adaptive air suspension and active torque vectoring.  The Urus also offers the full range of safety and infotainment options that high-end SUV customers expect, with many options that can turn a car with a $200,000 list price into a $250,000 custom job.

The range is otherwise the Huracán and the Aventador, both exclusive two-seaters, plus a few very limited editions such as Centenario.  Last year, the company sold 1,095 cars in the U.S.  That’s the biggest market, as only 411 were sold in Japan, 353 in Great Britain, 319 in China and 119 in Germany.

But Lamborghini is also part of the huge Volkswagen Group, and it has resources to draw upon.  To accommodate Urus production, it has grown the Italian factory to 1.7 million square feet, hired 600 new workers and prepared a shrewd marketing campaign that relies far more on one-on-one experiential marketing than advertising.

“Our goal is to double production,” Farmeschi (pictured) told MediaVillage in an exclusive interview.  “With the Urus, we start with a big group of clients who wouldn’t ordinarily consider a Lamborghini, including families.  They are not cannibalizing sales that would have gone to other models.  Seventy percent of our buyers are new to the brand, and many of them are female.  They are entrepreneurs, doctors.  Many are 35 to 40 years old, quite young for us.  The car is full of technology, and we are seeing new buyers in Silicon Valley.”

Though the VW Group just announced a major consolidation of its ad spending into just three agencies (WPP in North America, Omnicom in Europe and South America, and Cheil, the incumbent, in China), Farmeschi told me that its marketing efforts are independent.  “We are not mass market,” he said.  “It is about one-to-one relationships.  Our dealers know the market, and the customers.  We invite them to track and lifestyle events, which builds awareness and an experience of the product.”

These efforts are, indeed, quite extensive.  If you buy a Lamborghini, you can learn to drive it at one- to three-day track events, which are paired to accommodations and fine dining that reflects what’s called the “Lamborghini Lifestyle.”

For the serious drivers, there’s the racing-oriented Squadra Corse.  Its Accademia programs use trained pros to teach driver owners how to pilot the vehicles in highly adverse conditions.  Then there are competition series such as GT3, with trained customers piloting the race-ready Huracán GT3 EVO. Lamborghini is also going to build a special non-road-legal competition edition of the Urus that is 25 percent lighter for racing events.  Hospitality VIP programs (with owners’ parades and “hot laps”) are also arranged in Europe, Asia and North America around the one-make racing series featuring the Huracán Super Trofeo Evo.

Encouraging owners to become better drivers is fast gaining favor among sports car manufacturers. Porsche, for instance, just built a new Experience Center on 53 acres in Carson, California, near Los Angeles.  “Drivers can pilot the latest Porsche models through driving modules meant to demonstrate the power, responsiveness and safety at the core of Porsche engineering,” the company says.  Acura takes prospective NSX supercar buyers on excursions to its test tracks.

I asked Farmeschi if Lamborghini would also build limited editions of the Urus with, say, special interiors and colors, plus maybe 10 more horsepower due to some tuning tweaks.  “We are building the Urus, which we hope will be 50 percent of our sales and [will] double the size of the company,” he laughed.  “For now, we’re just concentrating on that.”