Latino Social Groundswell May Save #SaveTheBakerAndTheBeauty 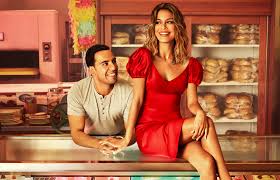 When I reviewed ABC's new romantic comedy The Baker and the Beauty last month, I made a huge emphasis on how wonderfully the show captures a loving, stable and functional family. From Shameless to Game of Thrones to Succession, nearly every family-centered show is about how broken and dysfunctional they are, so the Garcia's were a much-needed breath of fresh air. Two proud, happily-married parents, a young man searching for true love, and a younger sister still discovering who she really is with the help of her tender, loving older brother. Upon its premiere as a new summer show amidst a global pandemic, Baker just wasn't getting the ratings it deserved and its cancellation was announced last week. But don't turn off the oven just yet; there is still hope for this little gem of a show!

The creative team is actively shopping the series around networks and their loyal fanbase created a petition to #SaveTheBakerAndTheBeauty that amassed nearly 150,000 signatures in a week, along with vocal support from Latina stars Zoe Saldana and Eva Langoria. In an exclusive interview with MediaVillage, showrunner and executive producer Dean Georgaris and star Lisa Vidal (Being Mary Jane), the two speak about the show's impact and the loyal group of fans and support it has received since its premiere.

"The original series (Assi Azar's The Beauty and the Baker) was very focused on the main couple. I knew if we were going to bring this show to America and expand it how we would, we had to make it about family and Noa's impact on them and their impact on her," said Georgaris. "It always felt like a family show and I hadn't seen a family show with this tone on network TV. We wanted to make a family show right from the outset."

The series, which stars Victor Rasuk (Amazon Prime's Jack Ryan) and Nathalie Kelley (The Vampire Diaries) as the titular star-crossed lovers Daniel and Noa, who both recently had their hearts broken and unexpectedly spark a friendship and budding romance. Also starring are David Del Rio as big-mouth but big-hearted brother Mateo, Belissa Escobedo as teen sister Natalie, Dan Bucatinsky as Noa's manager Lewis, and Carlos Gomez and Lisa Vidal, as Rafael and Mari, respectively, the loving parents of the Garcia siblings.

While the pilot was shot in Atlanta, production moved to Puerto Rico, the first major production to film in the country following the devastation of Hurricane Maria in 2017. "We wanted to tell the best story we could with the best people we could. We had an all Latin cast, a Latin crew, a writers' room that was half Latin, and filming the show in Puerto Rico," said Georgaris. "I was not aware of the lack of representation this community had. I was just writing about family. Now that I see that void, I can't unsee it and I want to be part of the change."

"I remember last pilot season there was just nothing callin' my name, nothing that was interesting to me. I prayed, God I wanna be on this kind of show, a mom in this kind of family, I want them to be normal." She then recalled attending a screening event for One Day At A Time and seeing her longtime friend Carlos Gomez, who would eventually be cast as her onscreen husband in Baker. "He'd asked me if I'd gone in for Baker and the Beauty. He was telling me all about it and when I got home, I called my agent and said I needed to go in for it. My agent said they were about to call me to set something up."

"I knew nothing about the original and I just loved the characters and I knew what kind of mom Mari was going to be. I'm a mom with three kids in the industry and I wanted to bring that to the show. I knew that Dean's writing was going to give me that platform," added Vidal.

Speaking on the series' cancellation, Georgaris had this to say. "When [ABC] made the decision to cancel, I could tell they were disappointed. They, creatively, are fans of the show and they made the business decision that they made. It's confusing to figure out how much the passion of a show's fanbase can be monetized. What's amazing is when the fanbase mobilizes and people like Eva [Longoria], Zoe [Saldana] and Lisa can be vocal."

"The numbers game is still so huge in television and it's why we're calling on our Latin community to get eyeballs on all Latin shows, not just ours," said Vidal. "A big part of our fanbase is also non-Latino and that proves that our show is universal, no matter what ethnicity they are."

I am personally holding out hope that a network like Pop TV, which saved Netflix's reboot of Norman Lear's One Day At A Time last year after its cancellation and have a feel-good, family-friendly Latin Night. Regardless of where it ends up, The Baker and the Beauty is a gem that absolutely deserves to be saved.