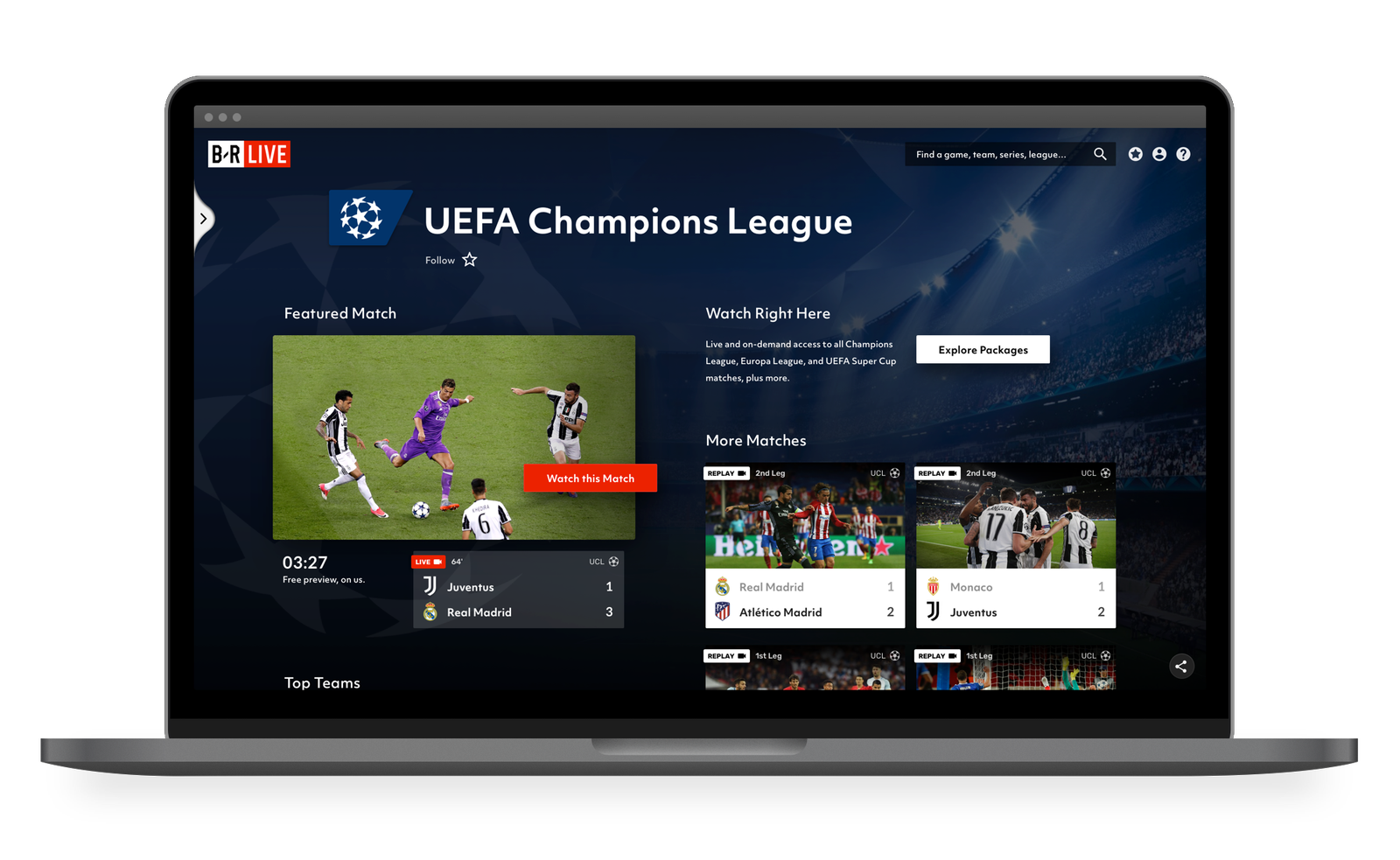 Turner Sports is about to plunge into the streaming sports waters, with direct-to-consumer offering Bleacher Report Live set for an April 7 debut. B/R Live will come out of the gate in a free preview mode to stoke sampling, before converting this summer to a subscription model offering users access on an event or full-season basis.  Its initial roster will encompass thousands of hours of such live sporting events as UEFA Champions and Europa League matches, access to portions of NBA League Pass games, World Arm Wrestling League, 65 NCAA Championship events, the PGA Championship, National Lacrosse League and Red Bull Global Rallycross.

The streaming service will also provide scrolling feeds of real-time sporting events and search tools for users to locate and connect to the contests inside and outside of its holdings.

B/R Live will launch on the Bleacher Report website and on mobile at first, with apps for connected TV devices expected to be in place prior to the kickoff of Champions League, Europe's top club futbol competition and presumably the service's most attractive property, which kicks off in mid-August.

As Turner Sports delves deeper into digital and taps new subscription revenue streams, B/R Live also broadens its advertising portfolio considerably. Managing inventory and sponsorship opportunities for the service, Turner Sports' ad sales team will pitch properties on its own and in conjunction with the different leagues and their sponsor bases.

"We are certainly open to bringing league sponsors to the platform and we're going to introduce them to other advertisers through the power of the relationships Bleacher Report and Turner Sports have around the country," said Executive Vice President of Turner Sports Jon Diament.

Diament said B/R Live will be incorporated with Turner Sports' Upfront offerings, alongside March Madness and NBA basketball and its other linear/digital holdings. The company will also look to write business ahead of the start of the attendant seasons and in the scatter market. Traditional ads within games, sponsorships, and mid-roll positions are among the formats available to advertisers as means to reach fans.

"The game breaks are the breaks," so they will house traditional 30-second spots, according to Diament, who at the same time is also eyeing format innovation. "It may make more sense for a cool sponsorship on mobile devices," he said, noting users may only be engaged for short durations on their smartphones.

First up on April 7: The Spring League, a pro football scouting and event showcase, in which Heisman Trophy winner and NFL quarterback flameout Johnny Manziel perhaps takes his first step toward returning to Roger Goodell's circuit. The Spring League will feature sponsorships and traditional ad formats, Diament said, and deals are in place -- and will be announced -- ahead of the streaming of Johnny Football's debut.

As B/R Live gets off the ground, Diament said there will be opportunities for advertisers as Turner promotes the new platform via spots/mentions on its linear telecasts.

The platform's two-way connectivity is integral to its plans. "The future of advertising is more targeted messaging," Diament said, noting the company intends to use data around fans of players, teams and league to not only send them appropriate content, but relevant messaging.

Hypothetically, a Barcelona FC fan living in Florida could be served soccer news pertinent to the club, home to Argentinian legend Lionel Messi, and messages around a convertible, rather than a SUV, available in the team's maroon color. "We're going to customize the look, based on the data we have," Diament said.

He acknowledged the time zone differential -- Champions League and Europa League matches mostly air during weekday afternoons on the east coast -- could be an impediment.

"We're happy about those who are going to watch live. But many aren't going to be able to access the matches during work," he said, and instead will turn to encore presentations, or catch up via highlights and other content around the contests.

The executive noted futbol fans are passionate. "They are thirsty for content 24/7. We plan on being very aggressive in looking to non-traditional vehicles to reach soccer enthusiasts," said Diament, noting Turner Sports will look to build relationships tied to players, teams and leagues, relative to analysis, highlights, culture, lifestyle and other branded content pieces.

As to the matches themselves -- under its rights deal with UEFA, the governing body of European futbol, Turner's game plan calls for the presentation of 340 matches during each of three seasons on BR/Live, TNT, TBS and truTV -- will air sans spots during soccer's run of play. Turner Sports also will work within the club competitions' guidelines, relative to logo association with the on-air clock.  Diament said will look to maximize relationships with Champions League and Europa League sponsors.

Bleacher Report reaches some 250 million users monthly, 75% of whom are millennials or members of Generation Z. "They are the future," said Diament.

He pointed to remarks made by NBA Commissioner Adam Silver, who appeared with Turner Broadcasting System President David Levy at Bleacher Report's Manhattan office on March 27, when the curtain on the streaming service, which also will allow fans to purchase in-progress NBA League Pass games at reduced rates, was raised.

"This is the dawn of a new era -- streaming is not going away. These are educated consumers, many leaning toward connected devices," he said. "Partner with us early, come along for the ride as we innovate, learn and extend the fan base."