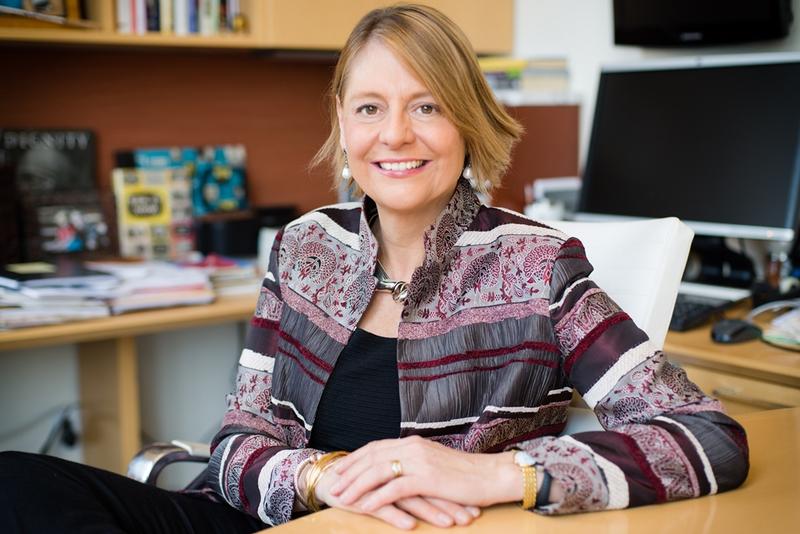 In the midst of today's passion for storytelling in this "golden age of audio," public radio of New York -- NYPR -- is a bona-fide success story. Its author, in large part, is President and CEO Laura Walker (pictured above), whose own backstory has helped spark a 2000% growth in listenership during her 20 years at the helm. The impressive audience growth and $100 million raised for long term investment is directly correlated to Walker's personal passion for narrative, journalistic integrity and community. They are the core elements of the promise delivered to a monthly audience of 22 million across such platforms as WNYC, WQXR and now WNYC Studios. And NYPR is adding new chapters regularly – from innovations in multi-platform journalism to new voices of the community.

Walker was the first non-mayoral appointee to the NYC public radio platform, put in place by the team that acquired the station from the city in 1996 to deliver it back from the brink by embracing change and upping quality programming. During Walker's tenure, NYPR has been honored with 10 Peabody Awards. While Walker is the first to acknowledge the imperative of hiring well and nurturing talent, her own experiences as a journalist and producer plus visible enthusiasm for innovation are definite factors in the NYPR turnaround. "Early on we decided there are two different platforms here," she explained. "There's radio and there's podcasting and some people will use them very similarly and some very differently.  We're still bullish on radio; it's still the primary way to listen, but now available more ways, like on smartphones and Sonos. So we decided to disrupt ourselves and find interesting connections between radio and podcasting and on demand."

A New Kind of Journalism

One of the most impressive new efforts is NYPR's approach to election coverage. Electionland, a first-ever real-time reporting collaboration with Pro Publica, Google, USA Today, Univision and others will look at what's happening with voter problems, from registration to the very ability to vote, not just in NYC but nationwide.

Walker noted that on Election Day we often hear of voting issues like long lines, voters being turned away, or names not appearing on rolls -- but these problems surface too late in the day to rectify.  "So, for our Election Central with CUNY Journalism School and other partners, we'll use Google and social media to see where people are mentioning those problems, then we'll verify and report on it through a network of brethren public radio stations, bloggers and print, and Univision will report in Spanish," she continued. "It's a great, multi-platform, new kind of journalism and the kind of reporting you can only do now, with technology and through a big, big partnership with a lot of different people."

After a decade of building podcasts -- during which NYPR "stayed in it when people said this is crazy," Walker said -- the advent of mobile phones and the iPhone app paid off for the organization. But NYPR took the on-demand storytelling platform to a new level with the formation of WNYC Studios one year ago, and can already boast an enviable 26 million downloads as of last month. "It's amazing how fertile it's been; we've launched 8 new podcasts – some defined length and some ongoing series," she said. "We've had a tremendous success in terms of reach and audience, but a success for [the goal we set]: To build a place that's a creative center for podcasting that brings new and existing talent together and experiments with different voices and platforms."

They have incubated and encouraged those diverse voices with efforts that include a Podcast Accelerator, established last year to find emerging talent in the space, and Werk It, the industry's only all-women conference which features workshops, networking and panel discussions.

"We're very proud to announce our next podcast, called 'Nancy,' launching early 2017," Walker said. "I love that it's one of the winners from among 400-plus entries of the Podcast Accelerator that we held in 2015. It's two people -- best friends -- with conversations surrounding the LGBTQ experience. It's a lot of fun and can also be poignant. Plus, we'll have our second season of More Perfect and other things in the works like piloting with Vanity Fair."

Walker's passion and determination to grow, evolve and serve is tangible in explaining their goals for authenticity and diversity. "I think around 9/11 I understood how important it was to have solid NY-based journalism that was really listening to the needs of the community at that time," she recalled. "It was the act of saving the station and seeing how important that was that just said there was a huge thirst and need for what we had. "

When asked to consider additional factors that have driven the growth in listeners, Walker talked about supporting creative talent and disrupting themselves -- not just for the sake of innovation, but to innovate as a way to appeal to more audience and thus serve the public best. "I'm really interested in how to combine the power of story with how to engage and to provoke -- or convene -- a different kind of public discourse, and to use the technology to enable that," she replied.  "WNYC was one of the first stations on the dial and one of the first to stream and to podcast. It's a public service.  The first question you have to ask is, how do you reach more and new people? We are lucky to be guided by a strong sense of public service … and a New York spirit of entrepreneurism. We just had to disrupt ourselves, and the prize is reaching all those people."

And that is the short version of the story.