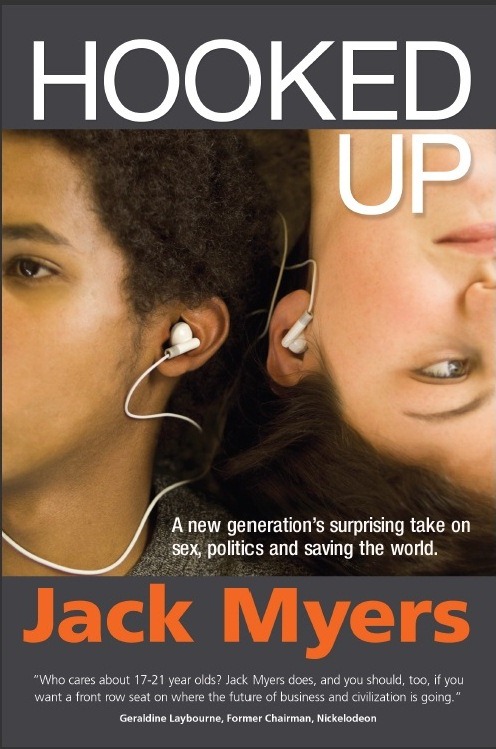 Chapter 18 of Jack Myers' book Hooked UP: A New Generation's Surprising Take on Sex, Politics and Saving the World focuses on how the Hooked UP Generation -- born 1991-95 and the first generation to grow up with the Internet – has developed a text language all their own. Hooked UP was published in 2012 and is winner of the International Book Award for Youth Issues and finalist for the USA Book Award for Pop Culture.

It's called texting or SMSing (for Short Message Service), and chances are you're already using it. LOL, IDK, FML and WTF (Laughing Out Loud, I Don't Know, F*** My Life, and What the F***) are possibly the four top text messaging shorthand "words" to emerge into the American lexicon. Text messaging is, in essence, a language of its own. It requires learning and practice, like any other language, in order to communicate effectively and be understood. Many text abbreviations and 'words' share a common meaning and interpretation. Others continue to be added to the language by users. The most common texts described above may soon be overtaken by SMH (meaning Shaking my Head or Sex May Help); TBH (To be Honest), and HMU (Hit Me Up).

It's not uncommon for groups of teenagers or college friends to develop their own text abbreviations as part of a secret code, decipherable only by members of their exclusive group. This enables them to send secret messages between each other without others being privy to what they are saying.

NetLingo and Urban Dictionary explain other popular text shorthand and remain the go-to-places for an answer to the latest WDTM (what does that mean) shorthand. The following chart includes some favorite terms in current use.

Texting Habits of a Generation

18- to 24-year-olds spend more time texting––sending and receiving an average of 100 plus messages daily––than they spend on almost any other activity. That's just shy of 40,000 texts per person, per year, a number that is more than double the comparable figure for 25- to 34-year-olds, and 23 times the figure for text messaging users who are 65 or older.

According to the 2011 Pew Research Study on Americans and Text Messaging, active text messengers are much more likely to prefer texting to calling.

Along with the increased use of texting, Internet Natives have become phone adverse. Making a simple phone call to request information, place an order, deal with a conflict or even speak to a friend or parent can be an exercise in futility. The trend extends beyond U.S. borders and includes places like Japan and Hong Kong, where mobile technology has been more advanced and texting became the norm for young people several years ago. According to the Pew Research study, text messaging and taking photos are the most common non-voice applications Americans use on their mobile phones. However, the use of texting is surpassing the use of voice calls among the Internet Native generation, and the trend appears to be growing among other age groups.

Texting: Not So New

Text messaging has been in common use for decades. The use of abbreviated texts is common in hundreds of disciplines, including medicine, science, business and the military. The first "FYI" probably adorned a business memo more than a century ago. Some of these common terms have become so embedded in our day-to-day language that their actual meaning has been lost, but everyone knows their intended meaning. Examples include RSVP for "Répondez S'il Vous Plaît" and SOS for "Save Our Souls."

The Study of Texting

The study of texting has existed longer than you might think. In fact, this field is already 20 years old, with volumes of research in various linguistic sub-fields. Computer Mediated Communication (CMC) is a new offshoot of the field. Noted linguist Susan C. Herring (Indiana University), defines CMC as "Text-based interactive communication via the Internet, websites and other multimodal formats, including mobile communication." Currently, most scholastic research doesn't consider CMC (computer-mediated communication) as "writing." However, as texting becomes a more prominent form of communication (and as voice-assisted writing gains accuracy), researchers may need to redefine traditional views of "writing."

In terms of gender differences in texting, research was done in a number of countries including Norway, where teenage girls and young adults text most frequently. Their messages were both greater in number, longer and more syntactically complex. 52 percent of Norwegian girls' text messages contained complex sentence structures compared to 15 percent of the boys' text messages. A similar German study indicated these broad differences between girls and boys are common. Girls are more likely to place emphasis on emotional exchanges, contemplate reasons behind interpersonal incidents and discuss, through text language, how incidents have affected them. Boys, however, typically place greater emphasis on speed; their messages tend to be brief, informative and practical.

Many educators tend to agree with these findings, believing that the text language system contributes to a decrease in interpersonal skills among teenagers and young college students.

The new text language also raises some concerns about writing skills. On the college level, writing requires the use of correct grammar, punctuation and spelling, all nonessential in the world of texting. Some educators worry that text messaging hinders the development of important skills including creative writing, essay writing, the ability to express personal viewpoints, and many others.

In some schools, the criticism of text language began when text slang began to appear in assignments and exams. This was a natural byproduct of texting as an integral part of students' lives, indicating a need for students to learn the appropriate times and places for using this language

In contrast to the criticism, some studies show positive aspects of the new text language.

Francis Katamba, professor of Linguistics at Lancaster University, expressed his belief that texting is a means of enriching modern-day communications by stimulating the thought processes. Professional linguist and author David Crystal expressed positive findings in his research report Txtng: the Gr8 Db8. Crystal concluded that SMS language did not promote a lower literacy rate nor did it cause bad spelling among those who used it. On the contrary, he pointed out that text messaging could actually improve young people's literacy rates due to providing greater opportunity to practice their reading and writing skills.

Crispin Thurlow and Michael Poff of the University of Washington. point out that "…most empirical studies maintain that texting does not pose a threat to standard English teaching and learning….Although there may be some diffusion of texting style into 'formal' writing (e.g. school work), texters almost always recognize that language is context specific."

Young people are inherently aware of key pragmatic considerations such as context, relationship and communicative intent in their writing, finding creative ways to be even more expressive through text language than they are able to be with traditional words and sentence structure. Research also suggests that the creativity of texting poses little threat to spelling. Tools such as automated spell checks have already decreased concerns about spelling literacy in real-world writing activities, and this trend is likely to continue.

New voice-aided Artificial Intelligence (AI) technologies, such as Apple's Siri and Google's Chrome platform, will need to adapt to texting and understand requests made using the shortened language.

Of course, texting may find itself usurped with a life cut short, or at best, side-lined, much as radio was overshadowed by television. Texting language may ultimately prove to be a communications skill unique to the first generations to grow up in an Internet world.

Future generations will continue to develop communications technology designed to optimize voice recognition. But even future voice recognition with its AI boost reaching very high accuracy levels has a flaw––lack of privacy––so a combination of texting for interpersonal communications and enhanced voice messaging for search queries is likely to evolve.

Farfetched as it may seem, future generations will be empowered with cognitive input and may merely have to think to generate messages on a holographic display. There is always new technology waiting in the wings to advance the state of communications.

Beyond the academic, what can we make of our emerging text language and the current crop of college age (and younger) practitioners? Are they gaining efficiency of communication at the expense of sentence structure, knowledge of grammar and basic writing skills? And more importantly, will this new communication style impact how this generation thinks, writes and communicates beyond texting?