Univision recently broke barriers by surpassing English-language nets as the highest rated network during primetime on a Monday night among Adults aged 18-49, the coveted advertiser demographic.

While the size of the network's audience is an important factor for advertisers to consider, there is also the matter of whether the audience is composed of viewers who will be interested in the advertiser's message and ultimately buy the advertised products! While Univision may be winning by attracting more young people than the other big networks, the question remains whether the network's Spanish-speaking audience is buying the product categories for the brands that advertise in primetime television shows?

TRA's patented Media TRAnalytics® is the only platform that provides advertisers the ability to find The Right Audience® so they can plan and buy more precise TV advertising plans that improve their ROI. Using StoryFinder™ we found that Univision's La Fuerza del Destino includes a high concentration of Energy Drinks, Spirits, Beer, Diapers and Salty Snacks buyers in their TV audience. Advertisers such as Red Bull, Budweiser, Pampers, and Doritos in these categories could leverage this knowledge in their media planning and eliminate wasteful media spending, by reallocating their media dollars to the right programs with The Right Audience® for their products. TRA's Media TRAnalytics® is changing the wasteful habits of the media industry by helping advertisers, agencies and networks buy and sell television media more effectively and efficiently. To find out more about Media TRAnalytics®, please visit http://www.traglobal.com. 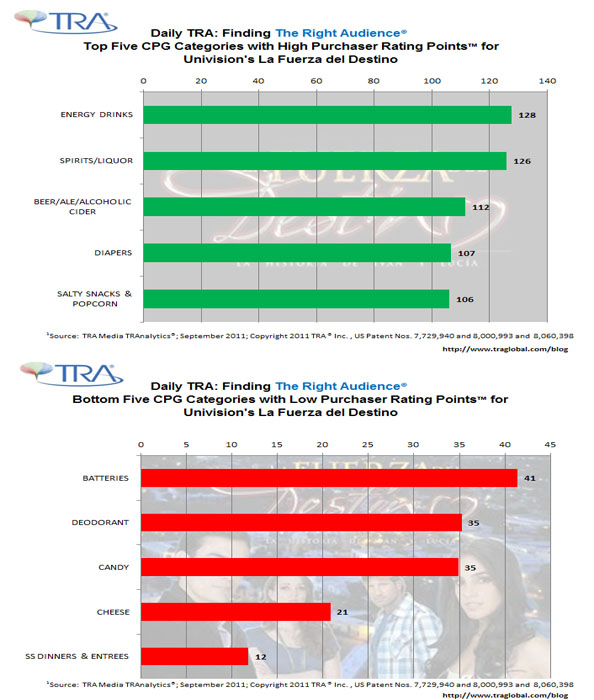