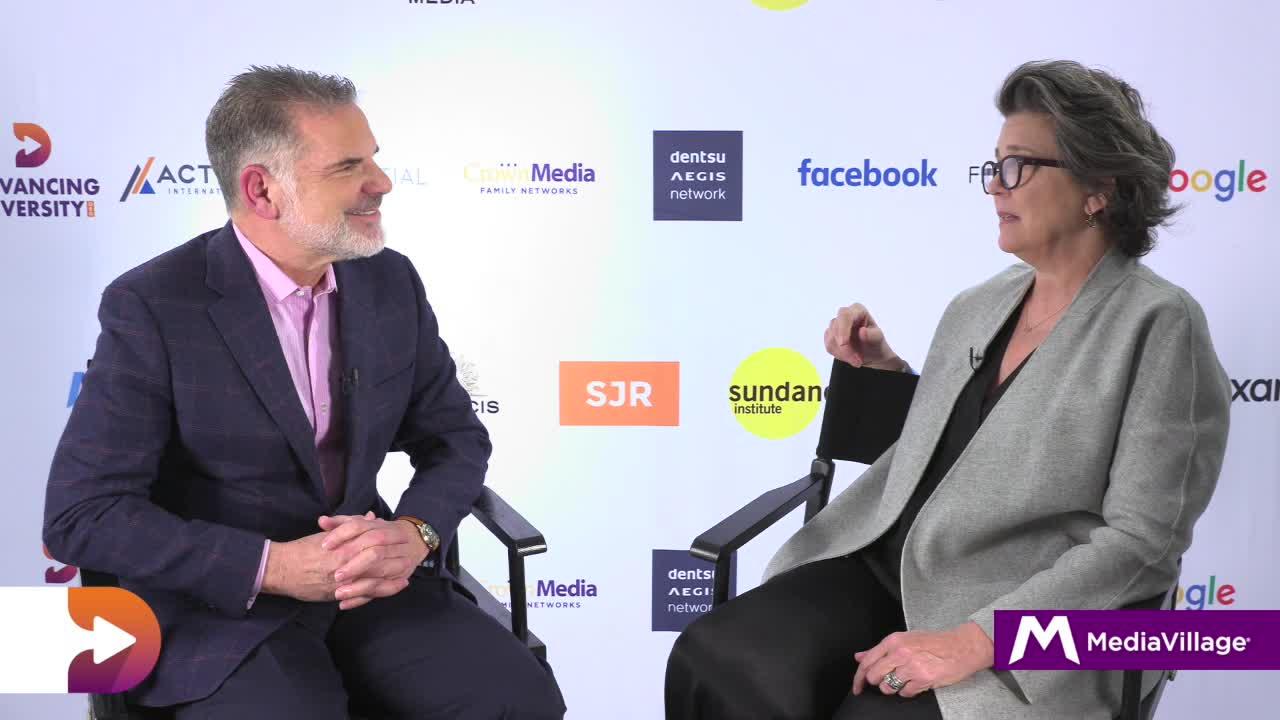 Madonna Badger, Chief Creative Officer and Founder of Badger & Winters, joined Jack Myers, Founder, MyersBizNet, for a heady conversation about diversity and inclusion, and living in a world of greater forgiveness and female empowerment in MediaVillage's newest installment in the Advancing Diversity video series.

Myers kicked off the interview by asking Badger about her vision for where the industry is headed next in terms of diversity and inclusion.  Badger replied, "I've come to the conclusion recently that solving unconscious bias is an inside job.  When you talk about unconscious bias, it's very hard to get someone to change, right?  It's unconscious.  I think more than anything, it's making them click and see, wow, 'I've got to make an internal change.'

"It's the idea that these movements like #WomenNotObjects and #MeToo and #TimesUp are to wake people up," she continued.  "That really is, I think, the goal.  We can't live in a world where we blame others.  And it's getting very hard to live in this place without forgiveness.  So, we have people who have done things, some more terrible than others, but the punishment is always the same.  I think that we need to live in a world of greater forgiveness.

"For example, I retouched Kate Moss in the '90s. I made her skinnier. I did that, I objectified her and it was an inside job to figure out, wow, this is wrong. This is really wrong," she elaborated.  "But the point is, it was part of my own awakening.  What am I adding here?  What am I really doing in society?  How can I, as a creative and as an advertising agency, make a difference in the world that points us toward positive change?"

Myers shared his own journey of awareness, regret and shame while writing his book, The Future of Men.  "I made it a part of my mission to help men find a path toward improving their emotional intelligence … and identifying and creating an opportunity for people to find that path to forgiveness," he explained.  To hear more about Myers' process, click here.

Myers then asked if there was a way to advance the process of moving toward forgiveness.  Badger thinks that we're at the tipping point as society becomes more polarized and the contrast becomes greater.  "You know, people like Martin Luther King during the Civil Rights Movement, there was a lot to forgive then," she said.  "There still is a lot to forgive, but I think that we are living in a society now where the contrast is so great.  You have people coming forward and saying, 'Yeah, I'm a racist.'  'Yeah, I believe this.' 'Yeah, I do that.'  I think that's what you need.  In order for change to happen, you have to have the contrast."

The two discussed Badger's induction into the 2019 Advancing Diversity Hall of Honors for her work eliminating stereotypes in advertising and transitioned into a discussion of the future of the independent agency.  "What do you see in the next couple of years for the independent agency?" Myers asked.

Badger discussed her work and the unique approach her agency took for a beauty product.  "'One of our latest campaigns is with Olay, which is part of Procter and Gamble, so it's interesting because it's a beauty campaign and we made it about really influential women who are changing the world.  So, we're for women and they happen to be for causes and so it really works in terms of making the world move more forward more quickly.

"As an independent agency, we're more able to put that stake in the ground and say, 'Hi, big gigantic company, we need to be about body positivity in everything.'  'We need to be about diversity.'  So as an independent agency, we're so much more on that cutting edge, I would say, of what is next," she continued.  "You know, looking at gender, for example, as not being a defining moment in a person's life, but rather just plumbing.  We really stand for female empowerment on every single level."  Click here to listen to Badger's take on women's economic power.

In wrapping up, Myers asked Badger about her perspective on the future of agency holding companies.  To hear her views on project-based creative work vs. the transactional nature of the traditional AOR relationship, click here.