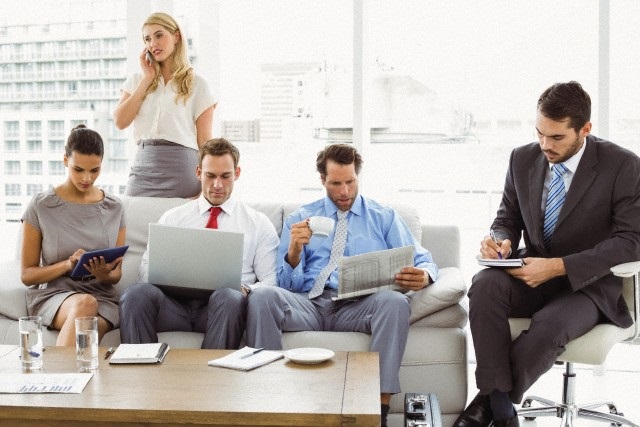 This week Leo Burnett Sydney announced their latest senior creative hires -- a group five white men (pictured below) -- and advertising powerhouse Cindy Gallop wasn’t too happy about it.  A champion of the 3 Percent Conference -- an organization that exposes the fact that only three percent of creative directors are women -- and diversity in leadership, Gallop quickly turned to Twitter, writing to Leo Burnett, “it’s 2015… what the f*** are you thinking?” She was supported by a host of angry user comments on mUmBRELLA, where the agency’s press release was posted. Meanwhile, Leo Burnett responded to Gallop's Twitterstorm.

This isn’t the first time that Gallop has called out the advertising industry through social media, inspiring one creative to start the Tumblr Too Many Guys, One Girl, a blog that highlights the overwhelming lack of diversity on leadership teams. If you’re in for a good laugh, check out the “You Got Galloped” Twitter account (you’ll thank me later). 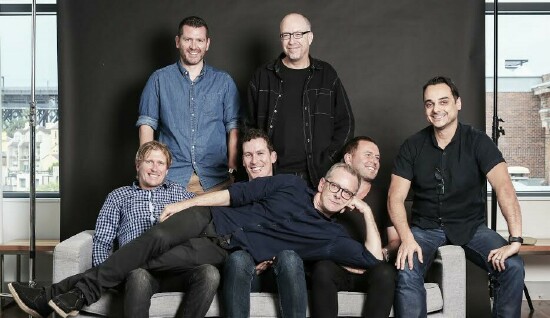 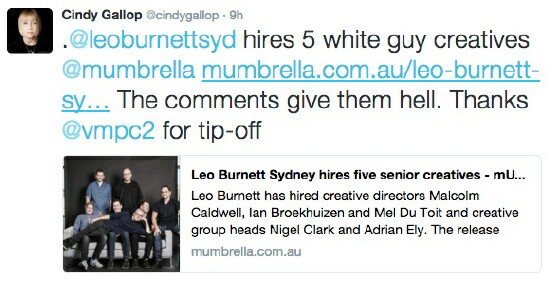 In a stand against gendered media, a new campaign called Cover The Athlete has released a parody video (below) that shows how male athletes might react to the sexist commentary that their female counterparts often have to deal with.  Overlaying some of the real questions that female athletes have been asked in the past -- questions about their body weight, hair and figure -- the video is a showcase of dumbfounded and confused men. Male sports coverage would never look this ridiculous, the video points out.  “Sexist commentary, inappropriate interview questions and articles commenting on physical appearance not only trivializes a woman’s accomplishments, but also sends a message that a woman’s value is based on her looks, not her ability,” the campaign website states.

Should We Say Goodbye to the “Involved Dad”?

In a thought-provoking op-ed in The Washington Post, Michael Kress, the editorial director of NYMetroParents, explains why the common and well-meant phrase “involved dad” is actually offensive and counterproductive. To Kress, being an active part of his children’s lives is a requirement -- not anything worthy of special praise or notice. He writes: “The phrase also smacks of unneeded and unwarranted celebration, perhaps even an implicit self-congratulatory pat on our own backs, for doing what we should be doing. What we need to be doing.” Dividing dads into two groups, he continues, allows corporate America to cater to one group, the uninvolved dads, who put their career before family. He concludes, “Language can play a role, small but symbolically powerful, in ushering along that evolution,” one where “involved dads” includes every dad and a business environment that supports all parents.

… Maybe Not Yet. Men Aren’t as Involved as They Claim to Be

While men today are much more involved in childcare and housework, the division of labor at home is still unequal, The New York Times reports. According to the men, however, they are doing their equal share -- even though data from the Pew Research Center says otherwise.  Another study from Ohio State showed that new parents worked the same number of hours, yet new mothers spent an average of three hours more on housework and childcare than new fathers. “Even feminist couples find it very difficult to attain equality, particularly after a child,” said sociologist Jill Yavorsky in the article. “What this means is extra work for women that is hard and stressful and also pushes them out of the work force. Women are taking on more of the economic risk that’s associated with a child.”

What are Good Friends For? Spiking Your Eggnog According to Bloomingdales

Bloomingdale’s took some heat on social media this week when readers took notice of a problematic advertisement in their holiday catalog. “Spike your best friend’s eggnog when they’re not looking,” reads the ad, picturing a man staring at a woman, who is looking away in the other direction. “Or don’t and quit being a creep,” tweeted actress Kristen Alderson along with a picture of the ad.  While the “best friend” may or may not be the woman, the ad doesn’t leave much to question, leaving many Twitter users appalled, reports Tech Insider. Amongst the Twitterstorm, Bloomingdales has since apologized for its “error in judgment.” 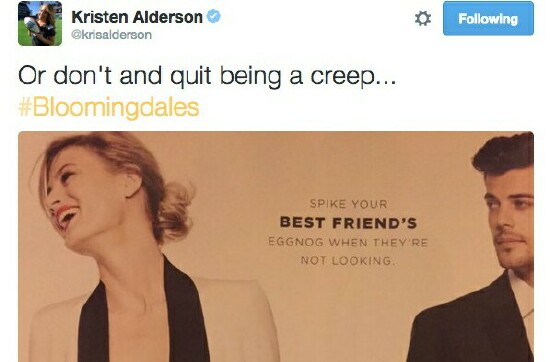