Leslie Grossman of "AHS: Cult" On Reuniting with Her “Popular” Boss Ryan Murphy 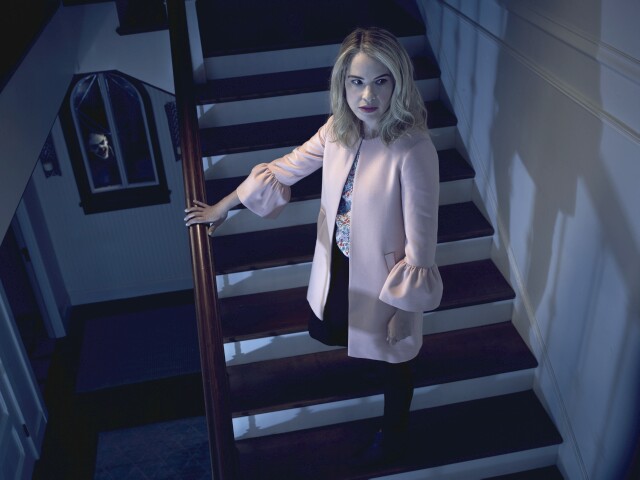 Leslie Grossman displayed dynamic comedic skills during her two seasons on Ryan Murphy’s underappreciated late-90’s satirical teen comedy Popular.  As social climber Mary Cherry (and at times her twin sister B-Ho), Grossman’s over-the-top portrayal helped elevate the series beyond the usual teen fodder of the time.  Clever writing and an excellent ensemble (pictured below), combined with Grossman’s unabashed willingness to do anything for the role made her a standout.  So the fact she’s reunited with Murphy for a meaty role in FX’s American Horror Story: Cult is casting magic.  “It’s so special,” she told me recently of reuniting with Murphy.  “Ryan and I speak all the time, so there’s always texting or something going on, and if ever there is a new script for something we’d talk about it.  That’s not a bad text thing to be involved in.

“We always knew we wanted to work together again in one capacity or another,” she continued.  “But I didn’t think it would be on this show.  I feel that I'm a comedy lady and didn't know how I would ever fit into this universe.  So Ryan got in touch with me saying, ‘I'd really like for you to be involved in this season.’  I was equal parts thrilled, terrified and very excited that I was getting a chance to be a part of it.”

In this installment of AHS, Grossman plays the mysterious Meadow Wilton, a melanoma survivor with as many secrets as hang-ups.  The role is a departure for Grossman, who also briefly worked with Murphy on his FX series Nip Tuck, and it’s one she’s relishing.  “There are some dark dramatic moments in this,” she said.  “It’s definitely stretching another side of me that I haven’t had the chance to do myself, and in ways I haven’t done before.”

Grossman revealed that this season of AHS has proven to be “intense” and that she has worked harder than at any previous job.  That’s largely in part to bringing her A-game to the set everyday.  “If I’m having scenes with Sarah Paulson, you better bet I know exactly what I’m doing,” she explained.  “It’s intimidating working with her because she’s the best there is.  Sarah is also hilarious so the biggest challenge has been not laughing 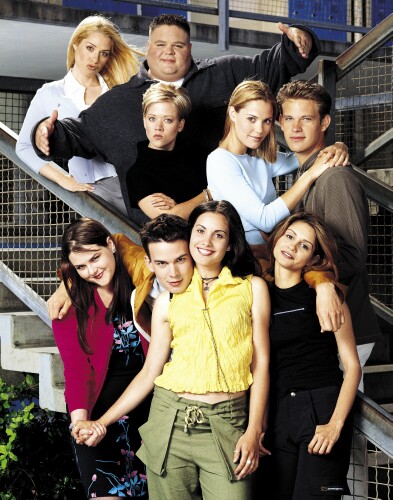 in every dramatic scene.  I’m fortunate to get to work with her as it’s an acting master class every day.”

According to Grossman, working with Murphy circa 2017 is a different experience from 1999, when Popular debuted.  “He’s around the set but not like when we first worked together,” she revealed.  “Then, he was there all the time, and we’d constantly bounce stuff of each other.  Now Ryan has an empire to run and there’s only one of him.  But trust me, his hands are all over every single page, every costume choice, everything -- he’s as involved as ever.”

The fact that Murphy has built an empire is no surprise to Grossman, who predicted it from the get-go.  “The day I met him I knew it would happen,” she laughed.  “I’m from Los Angeles, [where] you meet a lot of people that say they’re going to do a lot of things; then those things never materialize.  Every single thing Ryan said he was going to do has happened.

“I remember sitting at lunch with him after Popular was over and he said, ‘I want to do a show about plastic surgery,’” she recalled.  “Fifteen minutes later Nip Tuck was on the air!  It was a totally new, incredible take on this world that hadn’t been done before.  That’s Ryan!”

With Mary Cherry long behind her, Grossman marvels at Popular’s continued longevity, noting, “It’s had this life beyond what I thought it would have. When it was on, no one really paid a lot of attention to it, but it’s grown and become this thing.  Several times a week people come up and say something to me about it, including young people who were infants when that show originally aired who’ve since discovered it.  What I love is a lot of gay men tell me, ‘I may not have really understood what I was, then I saw that show and was like, ‘I think I’m gay.’  It had a gay sensibility because it was written by gay men in their 30s.”

Of her numerous outrageous antics as Mary Cherry, the one she recalls most fondly is her hilarious Teen Tart audition performing “Rock Me Amadeus” by Falco (see video below).  “When we did it I had fever of 103,” she laughed.  “I was in a light up dress that was extremely hot.  The whole thing was an out-of-body experience on every level, although I still remember the chorus.”

As our conversation concluded, I couldn’t resist asking for, “a little Mary Cherry.”  Grossman laughed replying, “Oh that’s for special occasions.”  After telling her, “It never hurts to ask,” she obliged in that oh-so-familiar Texan drawl, “Thanks, hun.”