Lessons from Kickstarter: How to Create Marketing Campaigns That Matter - SAY Media 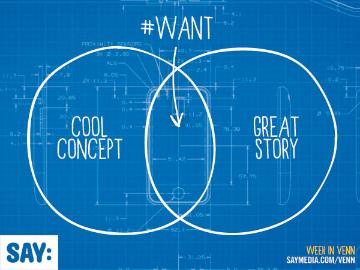 Kickstarter has become quite the phenomenon. In just three years, it has helped fund almost 50,000 projects to the tune of over $200 million. It's become a key tool for all sorts of creators - funding movies, music, video games, books, art, technology and much, much more. Pebble, a watch with an e-paper screen that runs apps from your iPhone or Android device, recently became the most successful Kickstarter project ever - raising $10 million on a $100,000 goal. You can get a sense of other projects that are catching fire on Pinterest - and it's not an overstatement to say that Kickstarter may be one of the most important and disruptive platforms in America today.

If you're unfamiliar with how it works, Kickstarter lets creators crowd fund support for a project, from the public. A project page is created, with a goal amount to raise, a target date (within a month), as well as a variety of tiered offerings for those who agree to pledge certain amounts. If the overall target amount isn't met, then no one has to pay and the project owner gets nothing. If the project reaches its goal (or, as in some cases, goes way way beyond the goal), all of that money is collected and provided to the project.

With a platform like this getting so much attention, it's reasonable to ask what lessons marketers can learn. I see a few key takeaways:

Having a personal connection with your audience matters. The thing that really seems to excite people about supporting creators on Kickstarter is the directnature of it. People like supporting people they like. They get excited about being able to directly support someone, rather than having a large stack of middlemen between their money and the actual creator. When people buy a CD from a store, they know that chances are the musician won't see a dime of that. But with a platform like Kickstarter, the connection is direct, and they know their support matters.

The story matters. There are all sorts of ways to pitch your project on Kickstarter, but the company has said that projects that include a really compelling video seem to do much better, than those that either have no video or a weakly made video. If you make the story compelling, it really works. In fact, others have suggested that the "tiered" offerings on Kickstarter don't matter that much either. If people want to support you, they'll support you. The different tiers just let them choose how to support you.

People who take part are invested in your success: The great thing about Kickstarter projects is that they're a great way to get fans to be really invested in a project's success. When people buy a product, they don't care all that much about how many other people are buying it. But having the target goal really gets the public invested in the overall success of a project. In fact, what's become clear is that people get really invested in seeing projects succeed at massive levels. While conventional wisdom might suggest that fans would not like it if a project gets "too much" money, the opposite has been seen in reality. Once they're bought into a project, they often want to see just how high it can go, and they celebrate the massive successes when new projects break old records. They're a part of the project, rather than just "a consumer."

All of these are lessons that can be useful both inside and outside of Kickstarter. Marketing campaigns that matter need to have a real connection, a good "story," and also get people invested in the campaign. None of this can be superficial, either. It has to be a real connection. Having a platform like Kickstarter can help drive some of that, but in the end, the ability to create that real connection is all that matters.