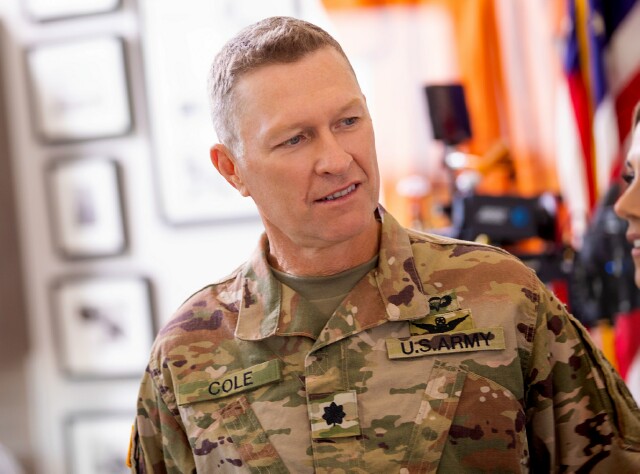 Holidays, particularly how they are depicted on television, hopscotch from Halloween to Thanksgiving, with Christmas happily dancing in the wings. Still, an important commemoration, Veterans Day, falls in between and often is ignored aside from a few feel-good minutes at the end of the news. However, Lifetime combines raising awareness for veterans with the warm fuzzy feelings of the holidays in A Welcome Home Christmas, premiering Saturday, Nov. 7. It will also be telecast on Veterans Day, Wednesday, Nov. 11.

Jana Kramer (One Tree Hill) stars as Chloe Marquee, an Army veteran who helps other vets transition to civilian life. She can’t help but help and volunteers for every good cause, determined to do all she can for the veterans’ community. Naturally, the Christmas movie formula is followed: romance blossoms, winter treats are consumed, and people’s better natures shine. Along those lines, Chloe falls for Michael (Brandon Quinn, The Fosters), a returning vet trying to muscle through tough times alone. Chloe’s mom, Lynn (Charlene Tilton, Dallas), is the wacky relative whose goal is to win the town’s hot chocolate contest. And, it’s always pleasant to see Tim Reid (WKRP in Cincinnati). While there’s a scene about his character’s name, Peter O’Toole, it’s worth remembering that he became famous playing another character with a great name, Venus Flytrap.

General O’Toole is an officer and a gentleman. If another character in the movie, Colonel Doug Cole – played by Craig Morgan(pictured at top and below) -- also strikes viewers as both, there’s good reason. He’s the real deal. Morgan served in the Army all over the world for 17 years. His voice may be more familiar than his face -- unless you’re a country music fan. Yet Morgan is starting to rack up acting credits (this is his fifth), following a dozen albums, including his latest, God Family Country.

"The entire concept is right in my vein," Morgan said of the movie during an exclusive interview with MediaVillage. "I didn’t have to act the character itself. It is very much in line with my lifestyle.

"I like acting," he added. "In light of everything that's going on with the pandemic, it's good for me to stay busy."

His character is Chloe's boss, and it's his responsibility to help returning soldiers find a path, receive services, and get whatever they need to make it. As the movie reveals, often veterans who have reason to pride themselves on solving problems are not the sort of folks who seek help. In many cases what they need most is a job.

Morgan hopes viewers will take that message and others from the movie. "After their service, they are a community of people that can be very reliable and appreciated in the workforce due to their experience gained in the military that the average civilian does not have," he explained."It was easy for me to identify with the people in the movie. Even though I am a civilian now, I still participate in a lot. It’s a big part of our life, my family’s life."

He also served as a military consultant on the film. While it’s not trying to be a documentary, making the movie believable was important. Army soldiers from the Tennessee National Guard are extras, and the Army provided Humvees, tactical trucks and a Blackhawk helicopter. "My job was to ensure they were properly dressed and doing things within military regulations," Morgan said. "They weren’t supposed to wear headgear in the building; little things like that." 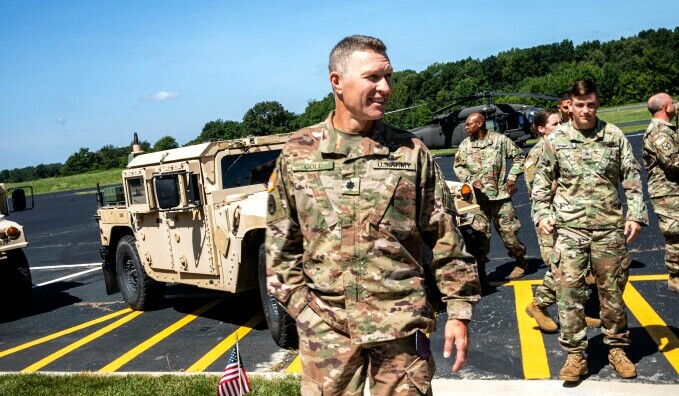 The Springfield-Robertson County Airport, in Robertson County, Tennessee, was converted to the fictional Fort Vasquez for the movie. Like just about every production this year, COVID was an issue. When a crew member tested positive, production stopped for 10 days. Then, as they do in the military, people got on with their jobs.

One of the plot points has the annual toy drive for veterans’ children at risk because of budget cuts. As the film points out, this is the one gift many children of deployed military personnel receive. It's a predicament Morgan has been thinking about, aside from the film. At his business, Morgan Farms in Dickson, Tennessee, they conduct an annual toy drive. "This year, we can’t have people drop off presents," he explained. "We’ll have people drop off money, and then Children’s Services and my family will get everything on children’s lists."

In A Welcome Home Christmas, a well-known man shows up to help with the toy drive. Corny as it may seem, the real Santa arrives to distribute toys that are precisely what the children (and one mom) desired. It’s one of the moments in the movie that will undoubtedly bring tears to viewers’ eyes. And, remember the title. Anyone who has ever misted up watching soldiers make surprise returns home is bound to cry.

"It is a very kind movie," Morgan noted. "A lot of wonderful scenes in this will fill your heart. It makes you get this warm feeling in your chest like, 'I want to help.' It is always my hope in everything I do, in anything I do, whether music, acting, speaking -- I want to try to impact people in a positive way. We just seem so separated from each other. I know it sounds super cheesy, but with every fiber in my body, I want to inspire other people, motivate people to show some love and kindness. Especially in these times."

A Welcome Home Christmas, premiering Saturday, Nov. 7 on Lifetime. It will also be telecast on Veterans Day, Wednesday, Nov. 11.