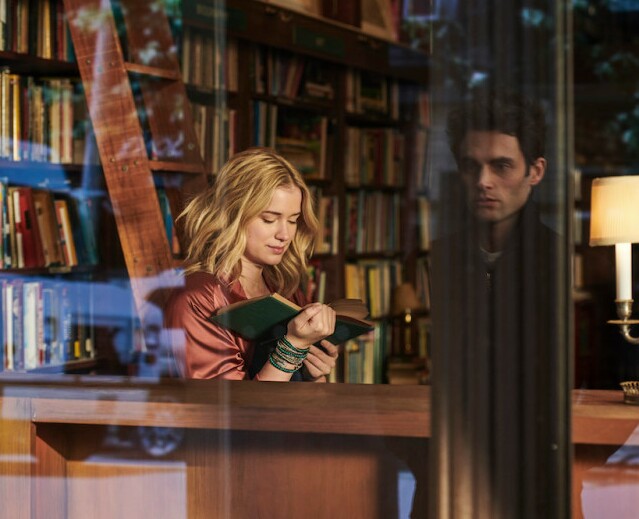 If you ask any Millennial if they’ve “Facebook stalked” someone, chances are they’ll say yes.  Whether it’s before a first date, befriending someone new or seeing what an old friend or old flame has been up to, we’ve all done it.  Some employers take to Facebook, Instagram and Twitter to see if anything offensive or controversial has been posted by their potential new hires.  Social media stalking in general has been rather normalized in the modern digital age of oversharing because it takes little to no effort to do it.

The new Lifetime drama YOU, based on Caroline Kepnes best-selling novel of the same name, takes the concept of casual stalking to new heights when a bookstore manager meets a writer and uses social media to learn more about her.  The series features a stellar cast -- Penn Badgley, Elizabeth Lail, Shay Mitchell and John Stamos -- and is co-created and produced by Greg Berlanti (Arrow, The Flash, Riverdale and many more) and Sera Gamble (Supernatural, The Magicians).

The twisted love story of YOU follows Joe Goldberg (Badgley), a brilliant intellectual who has been surrounded by great literature his entire life.  He has developed a keen sense of observational skills and is able to read people and break down their entire personalities, which we hear through his narration.  His assessments are based on nothing but what’s presented in front of him by individuals: their demeanor, their clothing and their gestures.  After meeting  yoga instructor/aspiring writer Guinevere Beck (Lail), who flirts with him plenty upon their first meeting, his curious nature inclines him to find out more about her.

A simple Googling of Beck’s unique name leads Joe on a search down the digital rabbit hole.  “Your online life isn’t real, it’s a collage,” he narrates as he goes through her photos.  “You pasted this Beck up, this together, loveable, bendy little creature.”  Joe even manages to get her address and peers into her apartment from across the street.  He’s struck by how easy it was because she, for some reason, had no curtains despite living in a street-level apartment.  “Jesus, it’s like you’ve never seen a horror movie ... or the news,” Joe muses.  As a yoga instructor, Beck posts her class schedule online, so Joe finds her classes with ease and remains a spectator, simply observing her, learning more about her day-to-day life and who she keeps company with, including her touchy-feeling professor and her spoiled, rich airhead friends.

During a panel for the series at the 2018 Summer Television Critics Association tour, showrunner Gamble made it clear that the headline of the series is “privacy is gone.”  She wasn’t kidding.  “It’s really, really hard not to have a social media footprint,” she told the press.  “Even if you’re not on social media, you probably have friends who are.  So, protecting personal information is shockingly difficult.”  This is made clear when Joe is able to track down Beck’s address with little-to-no effort.  “It was really interesting to us from the beginning that Joe Goldberg is not ‘Mr. Robot,’” Gamble said.  “He’s not some kind of crazy, techy genius.  He’s just an intelligent guy who understands the way that people use the internet and he uses it in the way it was sort of intended.”

Joe is an interesting person because of his curiosity, and while he may border on obsessive to most, he is still a rather charming and likeable guy.  His intrusiveness on Beck’s social media isn’t any worse than what most of us have done before when looking up people on Instagram and scrolling through their posts without liking anything or following them.  We quickly learn just how far Joe is willing to go to find out more about his dream girl, whom he comes to regard as a damsel in distress -- unhappy, in a terrible relationship -- and decides he’s the Prince Charming who will save her.

He’s an incredibly complex character because while his obsession takes a dark turn, we see him share some tender moments with his next-door neighbor’s son Paco, in whom he sees his younger self.  Joe finds Paco reading on the steps outside their adjacent apartments while his mother is in a screaming match with her boyfriend.  On multiple occasions throughout the premiere episode, Joe is like the big brother Paco never had, buying him milkshakes and taking him to his bookstore to get him new reading material and mentoring him in a way.

During the TCA panel, Badgley was asked how the storyline of the series and his character in particular will fare in the shadow of the #MeToo movement.  “I am really interested to see how people respond to the show,” he said.  “It’s a bit of a social experiment because it’s like a litmus test to see the mental gymnastics we’re still willing to perform at a cultural level to love an evil white man.  I think that it will certainly add to the conversation and it will create its own conversation.”

Gamble made clear that as the series progresses, viewers will learn that there is much more to Beck than the damsel-in-distress that Joe sees her as.  “We wanted to get deeper inside this character than we’ve seen in a lot of TV shows,” she revealed.  “Interestingly, the set-up of having a stalker who is watching her enables us to get deeper and deeper into [Beck’s] life and to dimensionalize her in ways that, frankly, often a character like this is not dimensionalized.  By a couple of episodes into the show we start to shift into her point of view more and more.  It was really important to us to start by seeing her as Joe sees her.  But, as time goes on, we start to see her as she [actually] is.”

Badgley and Lail both give fantastic performances as Joe and Beck, respectively.  The complexity behind the characters is fascinating; Joe with his heart of gold and underlying creepy undertones, and Beck trying to keep up appearances that her life is this bright, fun-filled world when she’s genuinely unhappy.

I have to commend the cinematography in the premiere episode, by Lee Toland Krieger and David Lanzenberg, who collaborate on episodes of The CW’s Riverdale and Netflix’s upcoming Chilling Adventures of Sabrina, among many others.  Their work adds another layer of complexity to the characters, story and setting.  At times it feels like we're actually seeing the world through Joe's POV, or experiencing how small Beck feels when she gives in to pressure.

Lifetime seems to think it has an instant hit, given the announcement at TCA that the network renewed YOU for a second season, weeks before the first season even began.  Season 2 will be based on Kepnes’ follow-up novel, Hidden Bodies.

YOU is telecast Sunday at 10 p.m. on Lifetime.