#LikeAGirl is Back! Gender News Weekly 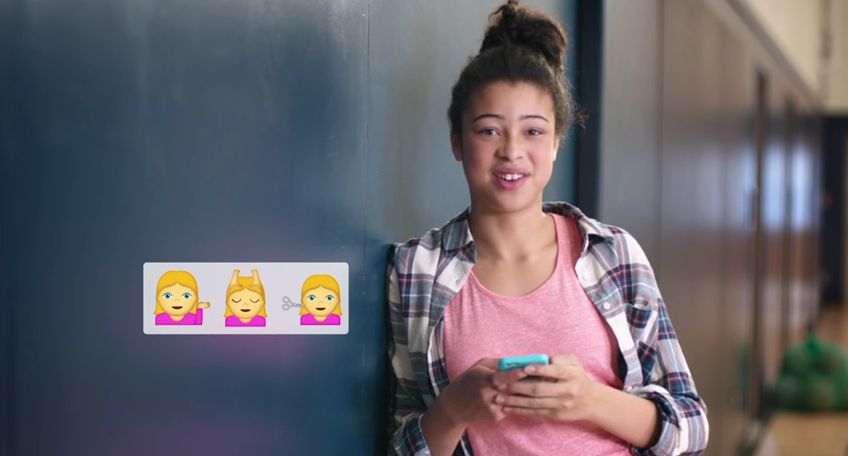 Always' award-winning #LikeAGirl campaign is back and taking on an unlikely subject – emojis. In their new powerful video, Always interviews teenage girls, who point out that most emojis are pink, "girly," and only doing activities surrounding beauty, Ad Age reports. On the other hand, the action emojis – biking, surfing, hiking, etc. – all feature men. Even more shocking, none of the "profession" emojis include women – unless you count the "bride" emoji as a profession, which one girl points out is absurd.  Because the girls interviewed were not aware of emojis' subtle limitations for women, their outrage comes out in the powerful video.  "Society has a tendency to send subtle messages that can limit girls to stereotypes. As someone who has studied sociolinguistics, I know the kind of impact even seemingly innocuous language choices can have on girls. It was so interesting to hear these girls talk about emojis and realize how the options available to them are subtly reinforcing the societal stereotypes and limitations they face every day," campaign director Lucy Walker said in a statement.

The Future of Men Begins!

Jack Myers' newest book, The Future of Men: Masculinity in the Twenty-First Century, has officially published! On publication day, Jack appeared on CBS This Morning with New York Timescorrespondent Jodi Kantor and hosts Charlie Rose, Norah O'Donnell, and Soledad O'Brien, where he discussed the shift in traditional gender roles. "We need to change the narrative around young men, and we also need to create a better sense of the man's role in a relationship," he told the panel. Jack then headed to Good Day New York, where he sat down with hosts Greg Kelly and Rosanna Scotto. "For young boys and college kids, gender neutrality is the norm," Jack commented. While this is great, he continued, confusion arises when men and women enter a largely male-centric workplace environment and are expected to act differently. Watch the full segment here.

The Future of Men conversation has just begun! Jack's full press calendar can be seen here.

Just as Disney execs left out Rey in the new Star Wars toy sets, the superhero Scarlet Witch has been excluded from the new Avengers toy collection, even though she appears in the upcoming Captain America film. Instead, the toy set includes Blank Panther, Ant Man, Vision, Spiderman, and an updated version of Captain America.  This isn't the first time the Marvel has excluded female characters from the Avengers' toy lines; when the last Avengers movie launched, they faced scrutiny for the lack of Black Widow toys – drawing criticism from several of the stars, and most notably, Mark Ruffalo via Twitter. While Marvel is working on a "Women of Power" initiative to highlight female characters in more comic books and games, they seemed to have missed the mark again, The Vergereports.  Black Widow and Gamora from Guardians of the Galaxy remain the only two female characters to have been featured in Disney Infinity toy sets.

YouTube is partnering with the United Nations to launch two new initiatives aimed at supporting and highlighting female filmmakers. Called "Spaces," the new program will champion women both behind-the-scenes and in front of the camera, The Drum reports.  Six female YouTube stars have already signed on, creating over 50 videos that range from scripted content to content directly addressing women's issues. "Through our global YouTube Spaces program and new partnership with the UN, we'll strengthen female voices on YouTube and around the world," YouTube exec Susan Wojcicki told The Hollywood Reporter. In the second initiative, Google will separately partner with the UN to support female "change ambassadors" in a year-long gender equality program.

March is women's history month, paying tribute to generations of extraordinary women and their contributions throughout history.  First Lady Michelle Obama kicked off the month by honoring female veterans at the annual Women's History Month reception, urging them to tell their stories, ABC News reports. "All of you learned how to build a team and lead others under pressure, and complete any mission in front of you no matter what it takes…. See, that's why it's important that you tell your own stories. … Our girls, our daughters and granddaughters, need to hear them," she told the crowd.  During this month, some women have begun speaking out against it, and this piece, which discusses the harm in feminism that celebrates only white women, went viral.  Other women and news outlets are embracing the "fempower," running profiles on powerful women throughout the month.

An Open Letter to the AAF President on the Ridiculousness of All-Male, All-White Juries

Why We Need Women's History Month, In One Brilliant Comic