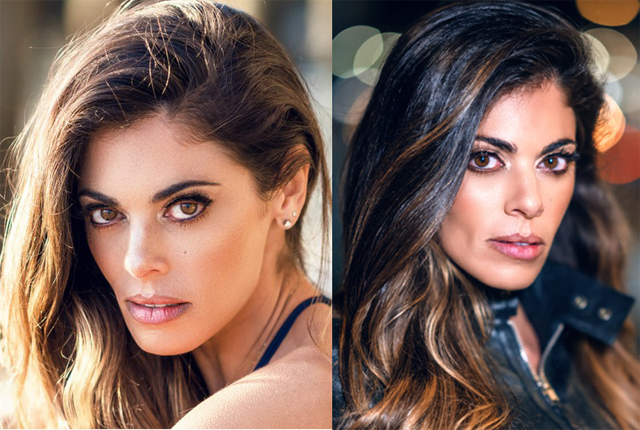 Lindsay Hartley is no stranger to daytime television viewers courtesy of her work on Passions, Days of Our Lives and All My Children. This weekend, fans of the actress will get a double dose of the popular actress in primetime as she tackles the roles of two very different women in one Lifetime movie, Killer Twin.  She plays orphaned and estranged twins who were separated at the age of three:  Kendra, now a happily married teacher, and Amber, a petty criminal capable of much worse than small crimes.  Adopted life for Kendra provided a loving home, family and education, while Amber, forced to remain in an orphanage until she turned 18, wasn’t afforded any such privileges.  After discovering her lost twin’s whereabouts, Amber vows to steal the life she believes she deserved.  It’s when her passion for revenge becomes all-consuming that things take a deadly turn.

“It's always a blessing to get a job but getting to play two people in the same movie at the same time just screamed fun to me,” Hartley told MediaVillage in an exclusive interview.  “Amber was my first killer!  I've done bitch and evil, but never a killer. So I finally got to cross over and kill people.  Yay!  I just hope nobody's eavesdropping on this conversation as I say, ‘I had my first kill and I enjoyed it.’”

All jokes aside, Hartley -- a veteran of many Lifetime movies -- knew that tackling dual roles would prove a challenge, and it was one she was up for.  “This was actually a lot of work,” Hartley admitted.  “There was a joke on set about the fact I was in every single scene except the opening flashback of the twins as kids.  So, let's say I changed a lot of clothing.  But honestly, the cast and crew were so supportive and really cared about making it a great project.  It was such a special group and an experience I'll never forget.  I'm forever grateful.”

Having never portrayed a psycho-killer, Hartley admitted to having no idea from where she tapped that instinct to play Amber.  Simply committing to the role, doing her utmost to sell it, and hoping people bought it seemed the best approach.  “I really tried to consider what Amber was going through,” she shared. “What would someone have to go through to take someone's life?  It was tricky, and by the end I was exhausted.  One day I had to cry as one character, change and then kill someone.  Let me tell you, killing someone is not an easy task.”

As was co-starring opposite herself, something the actress soon found out in scenes the twins shared.  “It was a little challenging because usually I have somebody to act against and I didn't,” she said.  “They’d have a photo double in front of me and the script supervisor delivering the lines I'm supposed to be saying as one character to myself.  So at least I had somebody to look at.  But I was scared because I wasn't sure how the other character would respond.  The whole thing gave me some anxiety.  I wasn't sure if it would work.  But I think it did and it was worth it for the payoff of seeing the twins together on screen.  I hope the audience loves it.”

Hartley credits her daytime television days for providing “the stamina for these types of films.”  That, coupled with the numerous TV movies she’s starred in, opened the door to script writing (with writing partner Jason-Shane Scott) and that’s something she’s thrilled to be credited with.  “They’re dramatic stories and something I've done for so long now,” she said.  “There are guidelines and rules and a structure that have to be adhered to.  The structure changes, so you kind of have to go with it and it’s not easy, but we’ve done well so far.  Our fifth [script] starts shooting mid-August in New York.  The writing keeps me busy in my acting off time and it's so much fun to be creative.

“I never thought I would write until a few years ago and it took off,” she added. “We worked hard and were lucky to find people that believed in us and made it happen.  It changed a lot and was a big gift.  I like working and being creative and the cool thing about writing is I get to stay home with my daughter and be the best mom I possibly can be.”

Not that she seems to have a lot of time off between roles.  With two possible movies in her immediate future (schedules permitting), Hartley remains busy. And if playing twins wasn’t enough, she just completed Terrified At 17 (another in Lifetime’s At 17 series), playing a mother with D.I.D. (and four personalities). She’s definitely up for a sequel to Killer Twin and is looking forward to the day she receives a project where she plays every role.

“I'm ready,” she laughed at my suggestion. “That would actually be fun and something I'd look forward to.”

Killer Twinwill be telecast Saturday, August 4 at 8 p.m. on Lifetime.