Lionel Richie: A Natural for the Library of Congress Gershwin Award 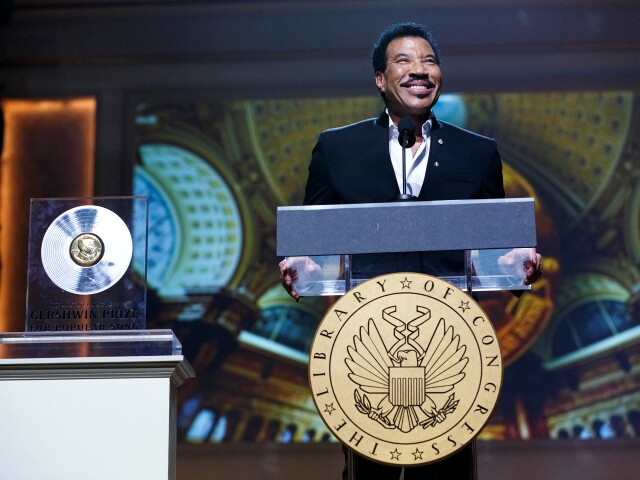 That the Library of Congress Gershwin Prize for Popular Song was back as a live event after a two-year "break" was reason enough to cheer the reinstated show Wednesday at Constitution Hall in Washington, D.C. But because the honoree was Lionel Richie, the hit-making songwriter who dominated charts in the 1980s, there was also a feeling that his catalog of so many love songs perfectly suited the moment.

"His music resonates and heals at a time we need it the most," said Librarian of Congress Carla Hayden, presiding over an event that hadn't been held since Garth Brooks was awarded at the brink of the pandemic in March 2020 and was returning as war raged in Ukraine.

"In many ways, the Gershwin Prize was made for Lionel Richie, whose music has entertained and inspired us for decades," she added.

As much in the public eye as ever at 72 as a current judge on ABC's American Idol, Richie sat with his girlfriend in a box stage right and enjoyed interpretations of his songs from seven artists before taking the stage himself for a pair of songs.

Richie said it was "an amazing honor" to join a roster of past recipients that include Stevie Wonder, Paul Simon, Paul McCartney, Willie Nelson, Burt Bacharach, Carole King, Billy Joel and Tony Bennett. "As my grandmother would say, this is about as high cotton as you can get." 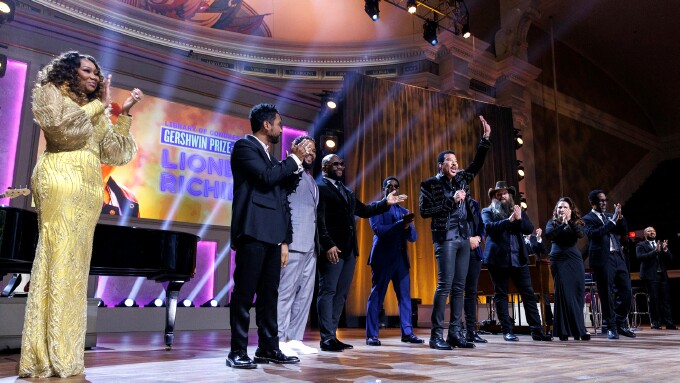 Hosting the event (which was recorded for a future telecast on PBS) was the seemingly ubiquitous black-ish and Law & Order star Anthony Anderson, who declared, "If you don't love Lionel Richie, something's wrong with you." With a big slide of Commodores-era Richie behind him, he asked, "Has anybody in music history had a better afro and mustache?"

Gloria Estefan, a 2019 Gershwin Prize winner, kicked off the evening with "Dancing on the Ceiling," calling out, "You better be ready to party."

The less than usual crowd was generally reserved in their finery and required masks. Members of Congress who usually flock to the event were still at the Capitol working; many rows of the arena stood empty. The band, too, was spare. In contrast to the full orchestra that accompanied the event in the past, there was a lean five-piece group with two backup singers. As such, they brought more of a rock edge to some songs.

But ballads were plentiful, starting with Andra Day's gorgeous reading of "Hello." Stunning in a powder blue ensemble topped with matching wide-brimmed hat, the singer, who earned a Golden Globe last year for her title role in The United States vs. Billie Holiday, is becoming a foremost interpreter of popular song and set the standard for those who would follow her.

Boyz II Men assembled around the piano to perform "Easy," which they had previously covered on one of their own albums. Growing up, member Shawn Stockman called Richie "a beacon of music for little tykes like us."

Country star and fellow Idol judge Luke Bryan accompanied himself on piano for "Lady," the Richie composition that became Kenny Rogers' biggest hit. (The other Idol judge, Katy Perry, had a gig Wednesday in her Las Vegas residency).

"You taught me so much about the world," Bryan said to Richie. Earlier on the red carpet, Bryan said when he was young Richie provided "the ultimate go-to music to close the deal."

The one performance that tore up the place was Yolanda Adams' gospel send-up of "Jesus Is Love," a Richie song from his Commodores era that has endured but never became as big a hit as, say, "Brick House."

But it was the honoree himself who sang what the Librarian of Congress had called "one of the most important songs in history," his 1985 co-composition with Michael Jackson that led to the huge all-star charity single, "We Are the World." A project meant to address African famine, it ended up selling more than 20 million copies.

"To our surprise, we didn't wipe out hunger," Richie said. But it still has power and relevance today.

As odd as it was to hear one voice sing it instead of the 21 distinctive soloists in the single, he invited the audience to join in the chorus, before jumping to the finale "All Night Long."

Lionel Richie: The Library of Congress Gershwin Prize for Popular Song will be telecast May 17 at 9 p.m. on PBS.