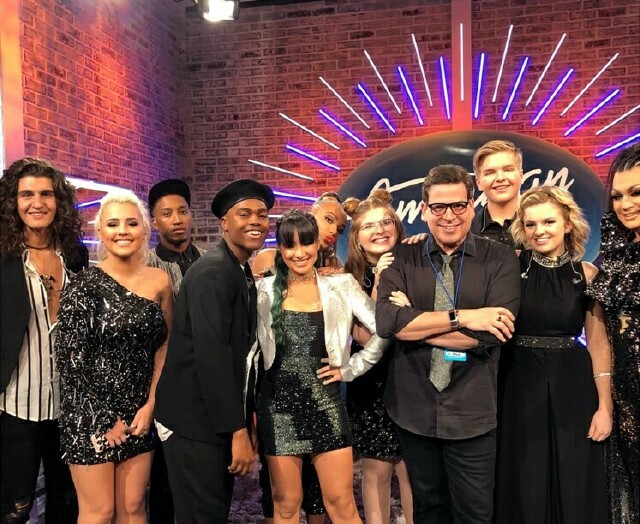 For the majority of American Idol’s run on Fox (and ABC) piano and vocal maestro Michael Orland was content sitting behind the scenes, helping some of the show’s most memorable contestants deliver timeless performances. That all changed when, amidst the confines of the COVID-19 lockdown, Orland (pictured at top, fourth from right, with the Idols from season 16) took place front and center on camera as the genial host of Live with Michael, an Instagram Live weekly chat-fest that reunites him with a cavalcade of Idol alumni. The charm of Orland’s free-form guerilla-style show is that nothing is off-limits, and his history with the guests, delivers a natural rapport.

Orland, an accomplished accompanist, has worked on stage with the likes of Kristin Chenoweth and Patti LuPone, along with tutoring private students. Honing his skills in New York, he tired of carrying his songbooks from piano bar to bar and became adept at playing by ear before relocating to Hollywood. Little did he know when accepting a last-minute invitation to Vegas, during Idol's first season to help pre-record backing tracks, just how life-changing that experience would be. It led to a permanent appointment, and now the popular Instagram Live show. 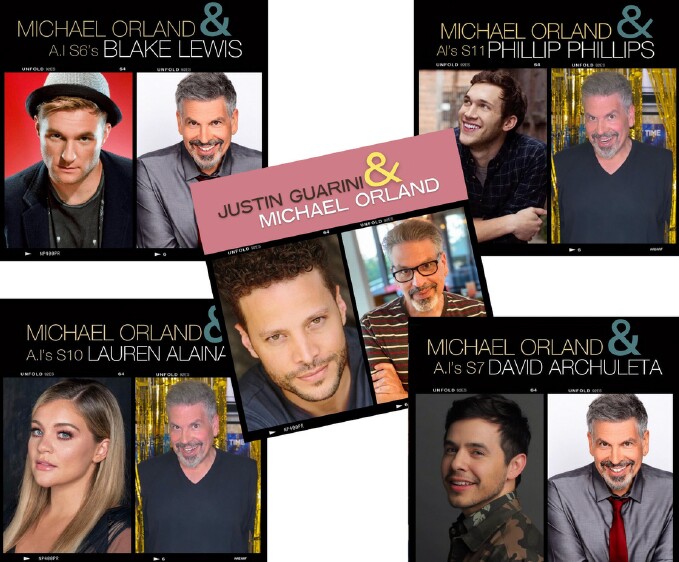 “The Instagram show started when my friend Caesar, who helps with my social media, suggested doing a weekly show,” Orland revealed in an exclusive chat with MediaVillage. “A little weekly show with everybody that's gone through those Idol doors, no matter how big or small. I thought it was such a great idea, especially while we're all stuck at home. So I said, “Let's just do it! Everybody I approached said, ‘yes,’ including a couple that I haven't even scheduled yet, like Jennifer Hudson, Paula Abdul and Randy Jackson.”

Since this past July, Orland has hosted 22 lively conversations for his show, with former Idol winners Jordin Sparks, Phillip Phillips, Ruben Studdard, Kris Allen, Maddie Poppe and David Cook, along with notable performers like Katharine McPhee, Lauren Alaina, Justin Guarini, Diana DeGarmo, Ace Young, Katie Stevens, Kimberley Caldwell, Caleb Hutchinson and most recently Constantine Maroulis (to name just a few). For Orland, talking with them is not just a chance to reminisce, it’s a chance to reconnect with people he considers family and helped grow into talented and successful entertainers. “I saw these kids, and I still call them my kids much to Ruben’s chagrin, at their most vulnerable,” he shared. “I’d always tell them the rehearsal room was a safe place -- laugh, cry, do whatever you need to do. I genuinely love them all and was there to help them when they needed it.

“I mean I just had a conversation with Kimberley Locke, who I couldn't love more,” he continued. “At the end of season two I was a roommate to her and Clay (Aiken). They had a house together and I’d sold mine, so I lived with them. I think she's at the age now when I started on Idol, like 17 years ago. I'm so proud of every one of these kids. Many didn't make it as big as Carrie (Underwood), Kelly (Clarkson) or Chris (Daughtry), but even Katharine McPhee has a huge career and a new TV show coming out on Netflix.

“I’d go to watch these kids every time one went into Rent or Hairspray,” he added. “I saw Diana (DeGarmo) and Ace (Young) on Broadway in Hair. I helped Katharine learn all her music when she went into Waitress on Broadway, and when Jordin Sparks did her Lin Manuel (Miranda) shows I was there. Lauren Alaina is now huge! I reminded her on my show about meeting during Hollywood Week; she was a baby. I am so proud of them.”

Thrilled with the response thus far to Live with Michael on Instagram, Orland hopes his candid conversations will translate to other multi-media platforms. “I have some big dreams,” he shared excitedly. “My goal would be to have an all-Idol satellite radio channel. I don't know why it hasn't been done. You have 18 seasons of Idol now and those people have put out so much music that you could just play music from those 180 people and interview [them]. I think it's such a good idea and I'm going to start pitching it soon, but now I’ve maybe given it away.”

Orland is also in the process of casting a wider net when it comes to Idol alumni. In addition to former scheduled judges Jackson and Abdul, he’s looking forward to procuring Kara DioGuardi, Jennifer Lopez, Simon Cowell and Keith Urban, in addition to the elusive (and hard-working) long-time show host Ryan Seacrest. Oh, and Adam Lambert is also on the list.

“The Adam Lambert fans are some of the most amazing people I've met in my life,” he explained. “They're supportive of me because Adam called me out on the show one week when he said, 'Thank you to Michael, who’s a genius.' I always say he is the most gracious, unselfish performer ever. That's the sign of a true star to me. Barry Manilow is like that. I’ve just loved doing this and look forward to many, many, more.

“I have to tell you, there are no [fans] like American Idol fans!" Orland added in closing. "And it doesn't matter who they are into."