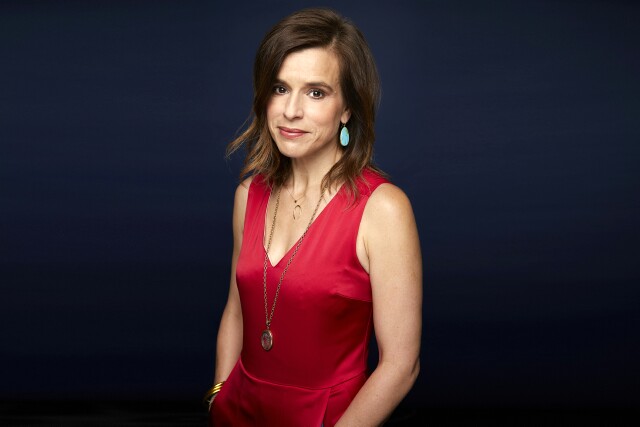 When flesh-eating, blood-guzzling zombies lurk, it takes a special kind of writer to make you focus on a single relationship amid the chaos of it all.  Liz Heldens, showrunner for Fox’s new hit thriller The Passage, crafted the series so the infected former humans remain terrifying but not as compelling as the plight of a girl and her unlikely savior.

The scary creatures are imprisoned in a lab while doctors race to find the cure for nothing less than a pandemic that could wipe out humanity.  Research scientists need a child -- one whom no one would miss -- to test their vaccine.  The covert government organization finds a young, African-American orphan, Amy (the supremely talented Saniyya Sidney), who becomes the charge of a rogue federal agent Brad Wolgast (Mark-Paul Gosselaar).

Heldens tempers what could have been a gory show, based on author Justin Cronin’s popular trilogy.  The showrunner, who learned the business from Jason Katims, helmed Camp, Deception and Mercyand was a writer on Friday Night Lights.  She recently talked about her latest series and reflected on her career with MediaVillage.

Jackie Cutler:  For those unfamiliar with the books, how do you characterize the series?

Liz Heldens:  Justin Cronin wrote this trilogy -- this big science-fiction crazy story.  At the center it is really about love and connections.  His characters listen to each other and hear each other and see each other.  The message I take away from his books, beyond all the fun genre stuff, is that we find redemption in human connection, and that is a nice thing to hold onto in the writers’ room.

Jackie:  As one of eight writers on the series, you’re overseeing the writers’ room, but what else does being a showrunner entail?

Liz:  It is a bigger job than you have any way of knowing before you do it.  You are responsible for everything on the show.  Everything!  If something is not right, it’s your responsibility.  You are responsible for scripts, (for everything) on set and for post (production).  It is just crazy.  The best thing you can do for yourself is hire well.  Jenji Kohan said (of being a showrunner): “You win a pie eating contest, and the prize is more pie.”  You do all this work to get a show on the air, and the reward is more work.  I love what I do, so it is great.

Jackie:  Your first credit, 19 years ago, is for a TV movie, Damaged Goods.  What were you writing before that and where did you get your start?

Liz:  I was working with a little theater company, Powerhouse Theatre in Venice, and I wrote a script.  It wasn't great.  An assistant from Fox 2000 was there, and they were looking for broad comedy.  I sold it to Fox Searchlight, and I got an agent, and she hooked me up with some TV work.  When I say it like that, it sounds fast.  I was writing it and adapting it, and there were a lot of panic attacks.

Jackie:  Yet you wound up writing for one of the giants of television, David E. Kelley.  What was that like and is he a mentor?

Liz:  David E. Kelley gave me first staff job on Girls Club.  When that show went away, Jason Katims was running Boston Public, and they slid me over to that show.  He was my friend and mentor and my TV writing father -- even though he is not old enough to be my father.  He brought me over to Friday Night Lights.  He is a fantastic showrunner, and he makes it look fun and easy and effortless.

I did not know David very well.  Girls Club was short-lived, and David is such a powerhouse; he just wrote everything himself.  The mentor would really be Jason.  He just led by example and is so collaborative and respectful of other people.  He appreciates other people's writing, and I think he was just a great boss.  One thing he told me was, “Don't say very much on notes calls because then they will be done quicker.”

Jackie:  What shows did you watch growing up?

Liz:  I watched a ton of television growing up with a single mom who was working.  I watched everything -- reruns of M*A*S*H, big dramas like St. Elsewhere and laterER.  I just always wanted to be a TV writer.

Jackie:  Did you study it in college?

Liz:  I did not actually go to college.

Jackie:  Do you see more opportunities for women now?

Liz:  Sure.  I think there is an effort for people to hire women, and I think there is a lot of pressure, which is a great thing.  I remember having staffing meetings canceled and being told that was because they already hired “the woman.”  I am really glad it is more of a mandate now.

Jackie:  Why is it vital to have more women showrunners?

Jackie:  What advice do you give to people who want to break into writing for TV?

Liz:  You just have to write a lot and keep yourself encouraged.  If that means being part of a writers’ group and anything that keeps you accountable, do it.  Talk to as many people as you can. When you get your first job, be positive -- be the first one there and the last one out.