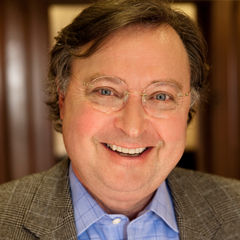 On November 9th, this year, Page Thompson will be one of four people being honored by the IRTS as a mentor to others at a special dinner event.

For details, visit IRTSFoundation.org and read Jack Myers' profile of David Poltrackhere.  As someone named as a mentor to Page, I am honored to share some unique insight into how he became successful in his early years.

Just before lunch, one late morning in the early 1970s, as the Media Research Director at J Walter Thompson, I received a phone call from Page Thompson the second, publisher of Girl Talk magazine.

"Could you give my kid a job?" he asked.

"He's a painter," the second answered.

"A painter?  Why would a painter want to join a media research group at an advertising agency?  Wouldn't he want to become an art director?"

So began Page Thompson the third's career in advertising.  He got lucky because he had a spot for him.

Page flourished at JWT.  He left the research group for planning and then, as the Media Director at McCaffrey & McCall, I recruited him as an Associate Media Director.  He barely had two years of media experience, so you would think he was in way over his head.  I knew that he wasn't, because he was special.

Through a series of circumstances I wound up at Needham, as Media Director in 1977 and they were completely rebuilding their media department.  Once again, I wanted Page, but this time he would have to be interviewed by my boss, Bob Marker, the head of the office.  I told Page to come in a half hour prior to that interview so I could fill him in on Bob's professional background, so we did that.  After the briefing, Page went up to Bob's office.

"I'm golfing with him this weekend," Page answered.  "And oh yeah, I got the job."

Seems that when Page got to Bob's office, my boss was on the phone and Page spotted a book about Winged Foot on the coffee table.  when Page mentioned that he golfed at Siwanoy, down the road from Winged Foot, they compared handicaps.  Bob needed a forth for the weekend and asked Page to join, then offered him the job on the spot.  It took me another six months to golf with Bob.

So despite my efforts to brief him, all Page did was keep his eyes open and being resourceful, took advantage of the moment.

Remember lucky?  Well ten years later Needham merged with DDB during the BIG BANG of DDB, Needham and TBWA, forming Omnicom.  Mike Drexler, my business partner today, was the DDB Media Director and slated to become the merged agency's Director, but Mike chose to leave and take a position at Bozell.  Page got the job, which led to running OMD and his position today, after a lot of hard work.

One last anecdote to give you more insight into Page's success:

While at Needham, Xerox was one of his clients.  He wanted to wean them off of a sporadic presence in TV specials and place them in championship sports.  Rather than regal the client with numbers, he took a then two year old song – We Are The Champions, by Queen, and edited in videos cuts of the most exciting moments in major sporting events.  In other words he created a music video.  I leave it to you to guess what the client did.

One of our secrets is that there is almost always a story hidden in numbers.  However, once in a while you need to tell the story first and let the numbers follow.

So there you have it: Luck, Resourcefulness and Creativity.  While I don't see Page often these days, we have a relationship that goes back more than 40 years.  It has always been one of great respect, but more importantly, he is my friend.