Lunch at Michael's with Pat Mitchell: Carrying the Paley Torch 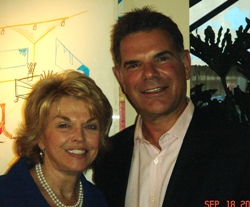 In 1970 after teaching at the University of Georgia for five years,single mom Pat Mitchellmoved to Manhattan. Living in Chinatown and writing for Look Magazine, Pat believed "it would all just keep getting better" untilLook ceased publication and she suddenly found herself alone with her five year old son, with no clear plans, few contacts, and very little money. Today, she is presidentof thePaley Center for Mediaand one of the media community's most popular executives, successful documentary filmmakers and now a dynamic industry spokesperson and leader.

I first met Pat in the early 1990s, when as president of Turner Broadcasting's film production unit, she joined me to co-produce the Turner Broadcasting documentary Hank Aaron: Chasing The Dream, which won a Peabody Award, won the Crystal Heart Award at the Heartland Film Festival, and was nominated for both an Academy and EMMY Award. Along with Turner Entertainment president Scott Sassa, co-producers Denzel Washington and David Houle, and film-makers Brian Robbinsand Michael Tollin, Pat oversaw the early ad supported programming initiative and sold the project to Ted Turner in less than two minutes. "Ted believed if I couldn't explain a project to him and convince him why it was worthwhile in less than three sentences, it wasn't worth doing," Pat shrugged.

"I had wanted to come to New York since growing up on a farm in Georgia," she recalled as we chatted over Cobb Salads at Michael's Restaurant. "Something made me want to be here. I had gotten all the degrees women were getting then. First the BS, then the Mrs, followed by the MOM degree," Pat laughed. Shortly after graduating college Pat married and soon gave birth to a son. Unfortunately in 1969 Pat also got the "Divorce Degree," and when theLook editorial opportunity came along, she picked up and moved.

Although the Lookarticle didn't materialize into the job she hoped for, Pat sold a story on Chinatown to the local NBC owned TV station and again thought she was on her way. "But no such luck," she frowns. "I soon figured out they weren't going to hire me fulltime, so I was waitressing and sending resumes and my tape to TV stations." While the tape didn't get her a TV job, it did land her a paid position with the John Lindsay presidential campaign. David Garth was running the short-lived campaign of the former New York City mayor and Garth hired Pat, forming a two person media team. After a few months, Lindsay withdrew from the race and Pat received an offer from the Boston Westinghouse-owned NBC affiliate WBZ-TV, which had turned her down six months earlier for being "too old." Pat's colleague at Garth warned her "TV will ruin your life," but she took the job anyway. The colleague: current CNN media guru Jeff Greenfield."I sent him flowers when he got his first job in TV," Pat smiles.

As president of the Paley Center, which earlier this year changed its name under Pat's guidance from the Museum of Television and Radio, Pat has moved quickly to bring it into the mainstream of 21st Century media. Since joining the Center in March 2006, Pat has been dedicated to converting 150,000 hours of materials into digital format, making content available across multiple platforms, overhauling the Center's website (www.paleycenter.org) with interactive features, and delivering more video, including live video of much of the Center's on-site programming. The Paley Center now has a page on MySpace and Facebook.

Pat arrived in Boston as a producer and was shifted three months later to on-air film and theater critic for the 11 PM news; soon she was hosting the morning show and co-anchoring the 4:30 PM news, staying at WBZ for six years. In 1977, she moved to Washington's WTTG-TV "I was the first woman to host a news talk program alone, it was in Washington, and I faced a lot of the same flack Katie Couric has faced. Talk about hair and clothes," she comments empathetically. Doing two hours of live television per day, Pat honed her interviewing and journalistic skills, winning her first of multiple Emmy nominations and ultimately forming her own production company and syndicating Woman to Woman to 115 stations before NBC produced Woman to Woman with Pat Mitchell as a Today Show feature for five more years. In 1989, Pat convinced NBC to allow her to travel to the Mideast for six months to produce a documentary film, Women in War: Voices from the Front Lines, which was acquired by A&E. Thus began her passion for documentaries and, in 1992, an invitation from Ted Turner to run his documentary unit. "Ted was producing 100 hours of documentary programming a year," Pat recalls. "No one was even coming close. The experience changed my life; I was full of passion for the documentary form of story-telling and had to keep doing this." After the Time Warner merger, Pat became president of CNN Productions

Pat's proudest achievements include A&E's Women in War series filmed in the Mid-East, El Salvador, Ireland and other hot spots; the 24-hour production of The Cold War, which was produced over a three-year period and included more than 600 interviews; and Century of Women, a six-hour documentary about the history of women in America. "The documentary genre today is very healthy," Pat believes, and while she is fully committed to the Paley Center, she admits "every day I'm tempted to produce another documentary. They have a lasting impact and are a record of time and events people will see and relate to for years." Turner's Century of Women series, she points out, stopped production in 1992 and needs to be updated.

During the week of October 24, the Paley Center is hosting its eighth annual Docfest07, which includes the U.S. premiere of Amazing Journey: The Story of The Who about the rise of legendary British band The Who, and the New York premiere of David Hoffman’s Sputnik Mania. Pat is bringing together filmmakers with potential investors, advancing a concept that AOL co-founder Ted Leonsis has described as "filmanthropy," raising money around a charity and using the investments to make a film that can drive people to understand an issue. (Leonsis' documentary film Nankingpremieres in early December, has already received multiple film festival awards, and is an early favorite for an Academy Award nomination.) Pat recently participated in the Women's Power and Peace Council meetings and she remains a proactive and outspoken global advocate for women's rights.

Pat Edenfield was born in Swainsboro, Georgia and spent her early childhood moving to different cities with her military dad until she was ten and settled back in Swainsboro, near Savannah. "I was the new girl in school every year," she remembers. "It wasn't easy and I needed to understand how to be accepted quickly. Needing to listen and understand people helped make me a good journalist."

Under Pat's aegis, The Paley Center in New York and Los Angeles are expanding their member programs, making collections more available to schools and universities to assure students have a historical perspective of media, attracting new members, building out digital assets, and also planning to develop satellite extensions in a major university system. It seems likely before too long, Pat Mitchell and the Paley Center will also be producing documentaries that advance awareness of media and its role in society.

Lunch at Michael's is a registered trademark of Jack Myers.