Marcel the Mischievous Monkey:  Forever a Friend of "Friends” 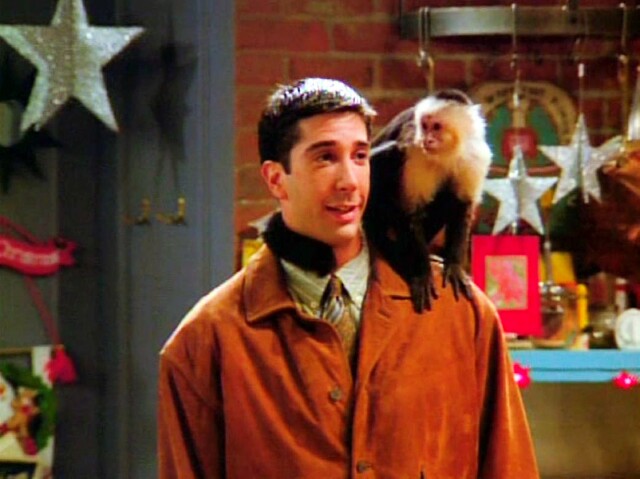 It was during episode eight of the first season of Friends, titled The One with the Monkey, that viewers were first introduced to the adorable Marcel, a white-headed capuchin monkey Ross brought to Monica’s apartment.  After being rescued from a lab by Ross’ friend Bethel, Ross adopts the little munchkin, who would go on to appear in eight episodes throughout the series, cementing his status as a Friend of Friends.  Marcel’s appearances were peppered thought the first two seasons of the series, including The One Where the Monkey Gets Away, in which Phoebe (Lisa Kudrow) got shot with a tranquilizer dart while searching for the runaway rascal.

While adopting a simian seemed like a good idea at the time, Marcel reaching sexual maturity became a real issue for Ross.  After he started humping everything in sight, Ross was forced to surrender Marcel, entrusting his care to the San Diego Zoo.  That wouldn’t be the last viewers saw of Marcel, though, and while his time as a Friend of Friends was short, he definitely left his mark on the series in more ways than one.

On camera, Marcel seemed to have a wonderful relationship with David Schwimmer who played Ross.  However, off-screen it was a completely different tale according to Matthew Perry, who portrayed Chandler Bing.  “Marcel was a monkey,” he recalled during an interview with me.  “He had a trainer, who by the way had scratches all over his face.

“[The trainer] would yell instructions to the monkey while we were doing our scenes,” he continued.  “So, the monkey would go up while we were trying to do our scenes.   Eventually, the six of us said … ‘We are pretty good ... [nix] the monkey.’  It was David Schwimmer who actually asked that Marcel get the boot, as he had all the scenes with him, and Schwimmer was like, ‘I'd rather act with people.’” 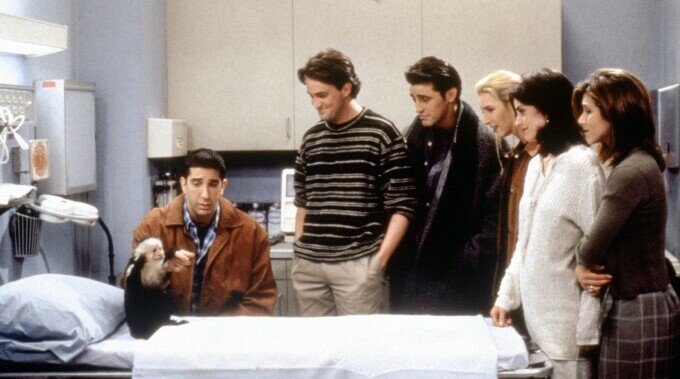 Marcel, who was actually portrayed by two monkeys (the aptly named Monkey and Katie), sealed his fate as a series regular largely due to one particularly bad habit Perry described, “It would shit everywhere and in our shoes!” Not a way to really endear yourself to fellow castmates.

Following a sad farewell, Marcel would return to the series one last time in the two-part season two episode The One After the Superbowl.  The monkey held his own amidst a star-studded Friends of Friends guest line-up that included Julia Roberts, Brooke Shields, Chris Isaak, Fred Willard, Dan Castellaneta and Jean-Claude Van Damme.  In it, viewers learned that after being stolen from the zoo, Marcel had gone Hollywood, starring alongside Van Damme in Outbreak 2: The Virus Takes Manhattan (a fictional sequel to Outbreak, the 1995 smash starring Dustin Hoffman).  With the film being shot on location, the gang tracked Marcel down and after a resounding rendition of his favorite song The Lion Sleeps Tonight, Ross got to spend one final day with him.

Marcel may have been unceremoniously fired from Friends, but it was the monkey who would get the last laugh.  Both Katie and Monkey played the part of the diseased primate who unleashes the deadly virus in the actual movie Outbreak, marking the first Friends cast members to garner success on the big screen.  He would not be the last.