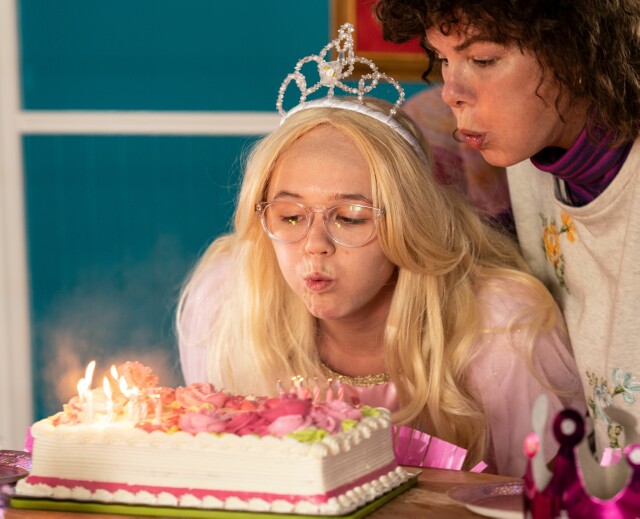 Lifetime continues its run of fact-based thriller movies this weekend with the debut of Love You to Death starring Marcia Gay Harden and Emily Skeggs.  Inspired by the true story of Claudine “Dee Dee” Blanchard and her daughter Gypsy Rose, the film depicts the harrowing story of Camile and Esme, a mother and daughter, respectively, with a seemingly loving relationship that in truth is fraught with madness and deceit.  Esme (Skeggs) is confined to a wheelchair and ravaged by numerous disorders (including sleep apnea, leukemia, muscular dystrophy and epilepsy), while Camile (Harden) convinces her -- along with an array of doctors -- that her "sick" daughter needs constant care.  As sheltered Esme's teenage hormones open her eyes to the world (and boys), Camile finds her caretaker role in jeopardy.  When the duo's relationship deteriorates, Esme learns her many illnesses are her mother’s doing, and following a clean bill of health, she becomes infuriated.  She plots an escape with a new boyfriend, feigning a kidnapping that results in murder.

For the film's stars, who both undergo drastic transformations to play their real-life counterparts, those makeunders helped immensely when they were getting into character.  "It really was motivating," explained Skeggs in an exclusive interview with MediaVillage.  "I've never seen myself look that sick, so it was easy to feel awful.  I've always wanted to get a roll with some crazy color, so I got that.  It was liberating."

"Liberating is the perfect word," concurred Harden.  "Because you do see yourself close to a real-life person.  There's a responsibility and onus to not be them, because they are them, yet you must understand them and have compassion while filling those shoes.  Once you feel like you have this physical world around you, it is completely liberating.  We had a great hair and makeup team who would be in there at three in the morning on most days.  Americans always complain that the British get to [transform] all the time, so it was really wonderful to be able to get to do that."

Harden was not familiar with the 2015 story, previously told in documentaries like HBO's Mommy Dead and Dearest (2017), and soon to be re-told in an episode of Hulu's new anthology series The Act, with Patricia Arquette.  Skeggs, however, was well versed on the subject.  "I love true crime, " she explained.  "It's a side hobby along with listening to, reading and watching documentaries.  I devour all that stuff as it fascinates me.  I'd heard about this case and had seen some material on it.  I also had friends tell me that I needed to play this girl, which I found hilarious because I had one friend text me about playing her while I was in negotiations to do it.  I told her to hang tight for two weeks -- I had been [interested in] the case for a long time."

For Harden, her co-star’s knowledge was invaluable.  "She had all this great research because she's kind of a little detective herself," she smiled.  "There were lots of intricate details to the characters that [Emily] knew about.  I was just learning about it with the script, and I wanted to know more and more.  The producers did provide a lot of material to read, but there were so many more details I wanted to know.

"Em gave them all to me, she continued.  "It was both a blessing and a curse because I wanted it to be true detail for detail.  One interesting detail was the real girl, Gypsy, escaped three times from her mother to be with a guy, or the neighbors, and each time the mom was able to persuade whomever she was with that they were wrong.  Her daughter was mentally disabled and simply acting out.  That was such an interesting detail because Gypsy’s words weren’t taken seriously, so what other choice did she have?  [Her mother] had the power to convince people she needed to come back."

Harden, who is the mother of three, found elements of her character relatable.  "I think it's all part of the cycle of life, " she explained.  “There’s a part in the middle where I can relate to a parent being nurturing, restrictive and overbearing at times.  It’s a style of parenting, and I could be accused of being overbearing in some ways with certain things I will or won't let my kids do.  I think every kid's right of passage, as a teenager, is to want to murder your parents.

"This girl was experiencing real feelings and hormones, and she really wanted to get laid,” she added.  “I have 14-year-old teenagers, so I didn't totally get it.  A parent reacts with oppressiveness at times because they don't want their child getting hurt.  This is an extreme version of Munchhausen Syndrome by Proxy; where the inability to recognize what was happening was torture and subjugation of the daughter.  To play the role I had to understand what that is, and I don't know that I really did.  You would really have to be disturbed to be fully able to do so, and this illness is not recognized by the medical profession."

Love You to Death will be telecast Saturday, January 26 at 8 p.m. on Lifetime.