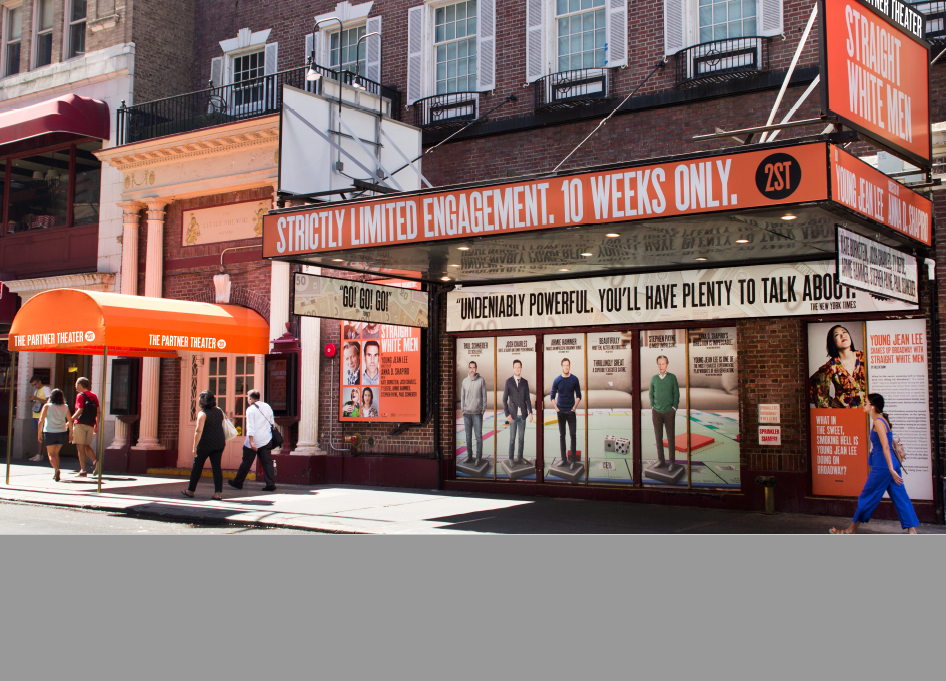 In order to stand out in today's media and marketing landscape, corporations need the power of brand equity.  The greatest challenge for marketers is communicating their message to receptive audiences and identifying high visibility partners that reflect common brand goals and can deliver positive consumer connections.  In that context, an appropriate marketer has a rare one-of-a-kind opportunity to gain exclusive naming rights with a uniquely American theater that honors living American playwrights at the peak of their profession, and that delivers 24/7 visibility in one of the world's most heavily trafficked centers of the arts.

The location is Times Square in the heart of New York City, the iconic symbol of American leadership and innovation in the arts is Broadway, and the opportunity is exclusive naming rights to the Helen Hayes Theater on West 44th Street.   Acquired last year by the non-profit Second Stage Theater and recently renovated by David Rockwell, the Hayes has a truly venerable Broadway heritage.  And unlike any other Broadway theater company, Second Stage is exclusively focused on the work of living 21st century American playwrights.  Its recent production of the musical Dear Evan Hansenis now on a national tour, and its latest, Straight White Men, was the first Broadway play written by an Asian American female playwright, Young Jean Lee. Download a full overview and a prospectus on the naming rights opportunity below.

Second Stage board member Brooke Shields became involved with the company not only because of her passion for the arts and for theater, but because "Second Stage is the personification of American values and American life," she says.  "We give voice not only to the American spirit but to the diversity of America and its people.  We are a home for telling stories that resonate personally with audiences and that reflect our humanity."

Second Stage's recent successes, in addition to Dear Evan HansenandStraight White Men,includeLobby Heroby Kenneth Lonergan,The 25th Annual Putnam County Spelling Bee, the Pulitzer Prize-winning musical Next to NormalandNotes from the Field.  Second Stage is committed to supporting both established and emerging artists.  Shields points out that Second Stage is also unique in its youthful audience, drawn not only by the relevance of the productions but also by the talented performers that it attracts.  Recent performers include Chris Evans, Armie Hammer, Josh Charles, Michael Urie, Anna Chlumsky and Brian Tyree Henry.  (Brooke shared that she looks forward to a return to Broadway in a Second Stage production and is looking for the appropriate opportunity.)

Board member Timothy J. McClimon, Senior Vice President Corporate Social Responsibility for American Express, says "It's a priority and commitment to attract talent that reflects diversity on stage as well as behind the scenes.  It's part and parcel of what we do and why we do it. Companies should want to partner with nonprofit organizations like this that are committed to diverse audiences and programs."

Carole Rothman, Second Stage Theater founder and artistic director, notes that the audience forStraight White Men was primarily between 20 and 30 years old.  The average age for theater-goers is 55-plus.  "We tend to get a younger audience," she points out, "because of the stories that we tell and the conversations we have with the audience."

Rothman is excited to welcome a brand partner to establish a new identity for the theater and "who believes in what we do.  Broadway is a brand and has been for decades.  A corporate brand that initiates ideas and reflects American values will complement our unique brand of theater and this generation of theater-goers."

Originally named The Little Theater in 1912 by producer Winthrop Ames, its goal was to share "the clever, the unusual drama that has a chance of becoming a library classic."  It was renamed the Helen Hayes in 1983 in honor of the beloved stage and screen actress.  Throughout its more than a century of history, the theater has featured the works of George Bernard Shaw, Rachel Crothers, Eugene O'Neill (his first full-length play), Guy Bolton, Langston Hughes, Albert Innaurato, Noel Coward, Tom Stoppard, Joan Rivers, Alfred Uhry and other legendary playwrights.  Rob Becker's Defending the Caveman, which holds the record for the longest-running solo play in Broadway history, played at the theater, as did Harvey Fierstein's classic Torch Song Trilogy, which is being revived there as Torch Song by Second Stage this year.

Amex's McClimon points out, "The geography of the theater and the name placement could not be more desirable.  The programming is attractive. Our diversity is attractive.  And the title partnership price is a bargain!"  Title rights, marketing details, and further background on Second Stage are available by download below.  Reach out by email to info@2ndstagebrand.com to explore partnership opportunities.