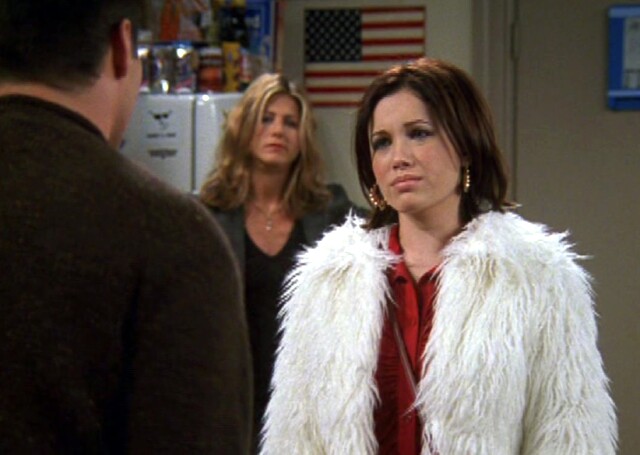 Since the early 1990s Marla Sokoloff has been a fixture on television, courtesy of roles on classic shows like Full House (where she had the recurring role of Stephanie Tanner's nemesis Gia Mahan), Party of Five, legal drama The Practice (she played Lucy the receptionist and, later, rape crisis counselor) and a host of other guest spots.  She also made a name for herself on the big screen, starring in the 2000 cult classic Dude, Where’s My Car? alongside Ashton Kutcher, Seann William Scott and Jennifer Garner.  If being associated with these pop-culture classics wasn’t enough, the icing on the cake for Sokoloff came about in 2001 when she didn’t just become a friend of Friends, but a member of the Friends family by appearing as Dina Tribbiani, the youngest of Joey’s seven sisters.

It was in episode ten (The One with Monica's Boots) of Friends’ eighth season that fans met the pregnant, unmarried Dina, who was unsure of what to do about her predicament and turned to Rachel (Jennifer Aniston) for advice.  Armed with a meatball sub, together they decided to tell Joey (Matt LeBlanc), whose support of Rachel when she was in the same situation had been invaluable.  However, his reaction didn’t quite go according to the girls’ plan.

For Sokoloff, it was a last-minute casting change that landed her the role, for which she is forever grateful.  “I will gladly be known for [being a friend of Friends],” she exclaimed when MediaVillage asked her about playing Dina.  “I was such a huge fan.  The person who originally had the job was let go very abruptly.  I was very abruptly brought in, which was very nice, and very abruptly made very pregnant to get the greatest job ever!

“Honestly, I was kind of starstruck all week because these were all amazing actors and it was such an amazing show,” she continued.  “I was even starstruck by the writers.  I really couldn't believe it was happening.”

According to the actress, it was “surreal to walk onto that set for the first time after seeing it on TV so much,” and the fact she was doing so as a Tribbiani just added to the thrill of it all.  “I was a family member!” she exclaimed.

“Matt was so lovely to work with,” she added.  “I’d met him a few years prior because a friend of mine had done a movie with him, so I casually knew him.  I feel like people want me to say that the others weren’t nice to me or something.  I could tell you stories about other people that weren't so nice to me on other shows, but that was not the case on Friends.  Everyone was lovely!  They were legitimately friends.”

<>Despite her big brother spending most of the episode furious at her, Sokoloff said a real bond developed between her and LeBlanc.  “Yes, [Joey] was mad with me,” she shared.  “Still, [Matt] definitely felt like a big brother and he was a complete doll.  Thinking back on it now, the whole thing is kind of like a complete blur.  I don’t really remember hanging out with anyone or having lunch with anyone, and do remember kind of feeling like a fish out of water, like ‘What am I doing here?’”

Since her time as a Tribbiani, Sokoloff has remained a fixture on television.  She has appeared in a string of projects for Hallmark Channel and recently completed The Road Home for Christmas co-starring Rob Mayes and Marie Osmond, airing in October on Lifetime.  Needless to say, to this day, she’s still constantly reminded of her Friends association.  “I can't remember how many years ago that was, but it was many,” she laughed.  “Still, every couple of days somebody will bring that up and I only did one episode.  It's not like I did eight or anything.”

The mother of two in real life also has a pretty insightful take on where Dina Tribbiani might be these days.  “She’d have 10 kids by now for sure, so a minimum of 10 children and running a meatball sub shop somewhere,” she said.  “I think she would've made the right choice when it came to getting married.  So, she probably married the guy she got pregnant with (Bobby Corso) and is still with him.”