By Steve Gidlow October 25, 2019 Behind the Scenes in Hollywood Archives 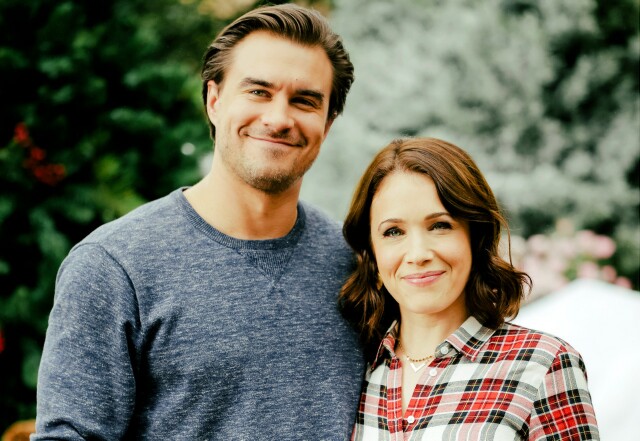 It’s been a few years since Lifetime viewers have shared some holiday spirit with Marla Sokoloff.  The last time she spread Christmas cheer was in the 2012 romantic comedy A Christmas Wedding Date, co-starring Chris Carmack, but the popular actor is remedying that this year with two holiday themed Lifetime movies -- The Road Home for Christmas, in which she stars, and Christmas Hotel, which marks her network directorial debut.  To say that Sokoloff is beyond excited by what Lifetime has made possible for her is an understatement.  It’s something even she can’t believe.  “There's a line in The Road Home for Christmas about my character making one of the easiest decisions she's ever made, and this movie was one of those for me,” she shared during a recent exclusive interview with MediaVillage.  “I'd done A Christmas Wedding Date with the same producer, and he's one of my favorite people.  So, when I saw his name pop up, it was another plus.  There were just so many things about it that it felt like I was getting a Christmas gift in June.

“And reading it, I instantly knew it was different and special and something I had to do,” she continued.  “We've all done Christmas movies in the past, but on set there was a special feeling we were making something special.  On top of that awesome script, there was also a music component, so I was instantly, 100% on board.”

That musical component came in three ways -- courtesy of her character, Lindsay; her co-star Rob Mayes (pictured at top and below with Sokoloff), who plays Wes, and entertainment legend Marie Osmond, who plays country music legend Cassie.  In the film, Lindsay and her musical rival Wes (Mayes) form a dynamic dueling piano team.  Lindsay is in the process of organizing a trip to visit her expectant sister when the duo suddenly finds themselves without a gig on Christmas Eve and has no way to pay for the tickets home.  With Wes also planning to head home to visit his ailing mother (in a nearby town), the two become unlikely traveling companions on a road trip.  It's through a series of misgivings that they encounter Cassie, whom Lindsay idolizes, and who helps save the day. 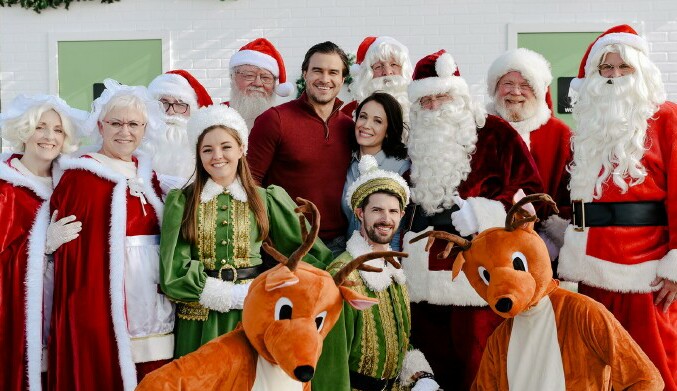 Sokoloff is an accomplished musician in her own right.  “I’m not sure who knows the singing part of me,” she revealed.  “I grew up doing musical theater.  I released a record in 2006, and my composer husband calls me if he needs someone for a TV show, so I do a decent amount of singing.  But I kind of keep it, unintentionally, undercover.  When the call came in for this my manager said, ‘Before they offer this to you, they want to know if you can sing?’  I was like, ‘Hello?  Why don’t you know that?  Of course, I can.’

“I guess I need to start telling more people,” she laughed.

“What was most interesting about the performances with Rob is that we actually recorded everything separately, and before even meeting,” Sokoloff explained.  “I went into the studio first to sing the [Christmas] medley we perform, then a couple of days later he did his parts.  When I got the recording, all I could think was how good we sounded together.  Rob plays the piano.  Sadly, I don’t, so I had a double, which kind of killed me because all I could think was, ‘Why did I give up those piano lessons when I was a child?’ 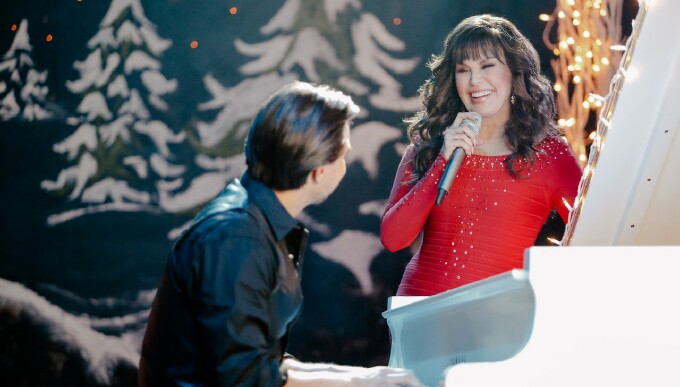 “And Marie Osmond!” she exclaimed.  “I think we’re all fans of hers.  Everyone on set was on their best behavior anytime Marie (pictured above) was working because we knew we were in the presence of a legend.  She was so bubbly!  I think she wants to start acting more, and she should!  It was fun to watch her perform and be in her element.”

Sokoloff told me the biggest challenge the project posed was acting like she didn’t like Hayes.  “Rob is adorable in this,” she said.  “I’d signed on and I remember e-mailing the producer asking where was my leading man?  It wasn't the easiest part to cast because not every actor can sing.  Rob is incredibly talented.  He has a record out at the moment.  With any co-star, it's either going to work on not.  Within five minutes of meeting him, I knew this was going to be good.  We have similar personalities, so the on-screen chemistry is completely authentic.  We had the best time.” 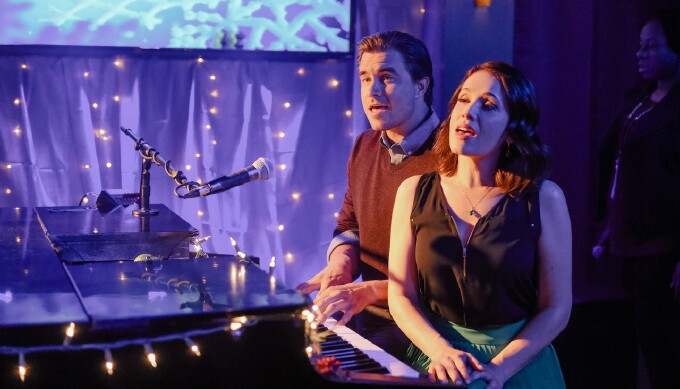 While the film is indeed a delight, Sokoloff wants viewers to know tissues will be required.  “I think a lot of people expect a sweet Christmas movie, but [this] isn’t the same Christmas movie we are all used to,” she said.  “I love those movies you can count on and know exactly what you're going to get, but this one … I doubt there'll be one person watching with a dry eye.”

Sokoloff is currently still hard at work behind the camera making her network directing debut with Lifetime’s Christmas Hotel starring Tatiana Ali.  (MediaVillage will give you more on that closer to its December 21 premiere.)  In closing she wanted to share her admiration for the network she’s happy to call home.  “I think it’s amazing Lifetime continues to release movies that females get to star in,” she said.  “They're also giving me the opportunity to make one of those movies as a director.  They’re doing so much for women in film and are so ahead of the times.  They’re killing it on that front.”

The Road Home for Christmaswill be telecast Saturday, October 26 at 8 p.m. on Lifetime.