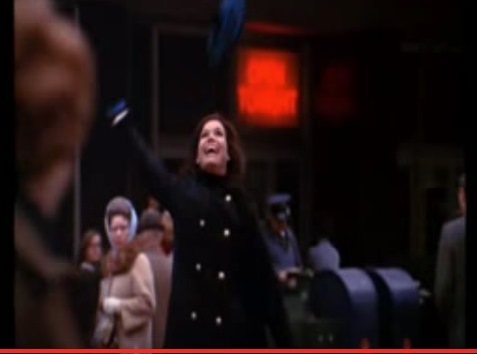 Mary Tyler Moore's became an iconic figure in cultural history by introducing working women on TV as positive independent characters. In my book, The Future of Men,Mary's story leads the chapter on TV Feminists: Leading or Following Society? The following excerpt from that chapter pays tribute to a TV legend and one of the most influential characters in television history, who sadly passed away today.

With the feminist movement that grew through the mid-1960s, television responded with series such as That Girl, an old-fashioned show about a single women living and working in the big city with the help of her boyfriend and her father, and The Mary Tyler Moore Show, a new-fashioned sitcom about a single woman making it on her own. The famous opening title sequence for the show closes with a scene of Mary walking in her new neighborhood and cheerfully flinging her Tam o' Shanter hat into the air, depicting freedom from her past and a new beginning, a scene Entertainment Weekly ranked as the second greatest moment of 1970s television. The theme song lyrics inspired a generation of women: