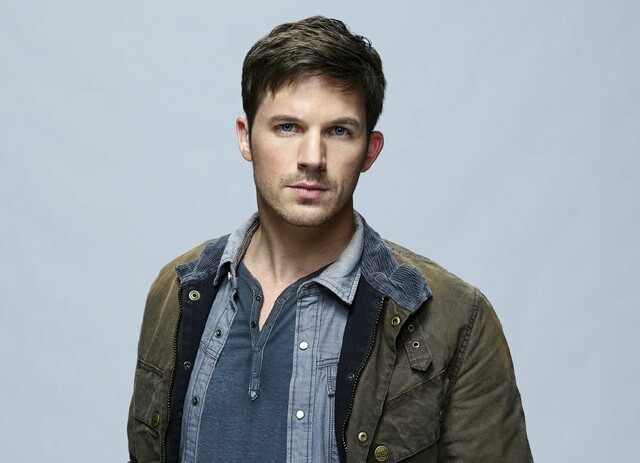 Since exchanging his modeling credentials for a SAG card, actor Matt Lanter has crammed a lot of credits into his 33 years. On television he’s played everything from the President’s son to a lovestruck alien, but it’s his latest role as time traveler Wyatt Logan on NBC’s hit freshman series Timeless that he considers an actors’ dream. “Timeless isn’t my first grown-up show,” Lanter tells me. “I started on Commander in Chief with Geena Davis. I was playing with the big boys very early on, and that doesn’t happen to a lot of actors. But this is the first show where I get to embrace a character who has adult things happen to him and has adult emotions.”

Lanter has certainly come a long way since his 2004 TV debut in Bravo’s Manhunt: The Search for America's Most Gorgeous Male Model -- a reality series that had him compete in sometimes-tawdry modeling challenges. Sadly for Lanter, even bravely parachuting from a plane wearing only a pair of white boxer briefs wasn’t enough to win the series (though he placed in top 10). But the young actor certainly won when it came to the challenge of career longevity.

The many guest spots and supporting roles that followed his exposure on Bravo eventually led to his portrayal of the son of America's first female president on Commander in Chief. Then came starring roles in two series aimed at young adults, both on The CW: The long-running 90210, a reboot of the contemporary classic Beverly Hills, 90210, and the short-lived sci-fi alien drama Star-Crossed.

And then came the lead in Timeless. The series (which recently received an extended episode order) follows three time travelers; soldier Wyatt Logan (Lanter), scientist Rufus Carlin (Malcolm Barrett) and history professor Lucy Preston (Abigail Spencer) all forced to band together to stop the crooked Garcia Flynn (Goran Visnjic) from altering key moments in history using a stolen time machine. However, courtesy of Time Travel 101, there is a catch: Anything changed in the past may well alter the present. That's at the root of Logan’s ongoing moral dilemma -- should he change the past to reverse the untimely passing of his wife? (Malcolm Barrett, Matt Lanter and Abigail Spencer are pictured above, left to right.)

“I think Wyatt is a little more rogue,” Lanter says of the character. “He tries to adhere to the rules of the team and time travel, but he may be the one that deviates from the mission to bring his wife back and is willing to take that chance. He wants her back at all costs.” 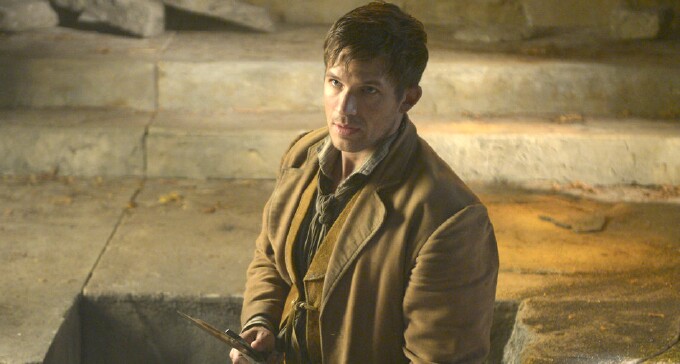 For Lanter, a self-confessed sci-fi geek, saying yes to a series like Timeless with an ever-changing story backdrop was a no brainer. “For an actor to be able to do something different and fun every single week is an incredible treat,” he enthuses. “The adventurous spirit of the show is really why I became an actor. Jurassic Park is still one of my favorite movies and I love the adventurous Spielberg-esque feel to [Timeless]. When I read the pilot and they were talking about what was in store for my character, how could I not want to be a part of that? It reminded me of Star Wars and Indiana Jones. I saw a lot of similarities to Han Solo and Indiana Jones in Wyatt. That was a huge reason for me to want to be a part of this.”

Lanter admits he “absolutely 100% feels like a kid in a candy store” filming the fantasy series in Vancouver, yet the reality of the series was a lot of homework, training for the rigorous weekly fight scenes and stunts involved with the show. “I’ve gone through a lot of fight training,” he says. “There seems to be a running theme in every episode that there will be some pretty epic fights and Wyatt is a part of them, so I’ve been doing a lot of stunts and fight training and actually worked with Special Forces military both in Canada and America.”

When he’s not chasing bad guys through time or picking himself up from a well-rehearsed fight, Lanter tells me he prefers a quite night at home with his wife watching old movies -- which leads to talk about one of his personal ideal time periods to travel back to. “I’d love to see old Hollywood,” he says. “My wife and I tend to watch old movies more than we do new ones so I’d love to go back and see the 1940s and maybe the birth of the talkies. I’m also a huge Paul Newman fan and think Montgomery Clift is a really interesting actor. There are so many great people I’d love to meet and do a scene with that would be really cool.

“I’d also love to see the Last Supper and just be a fly on the wall, or maybe guest,” he adds. “Just to hear what was said and what went on would be really fascinating.” Thanks to Timeless Lanter may well get that chance.