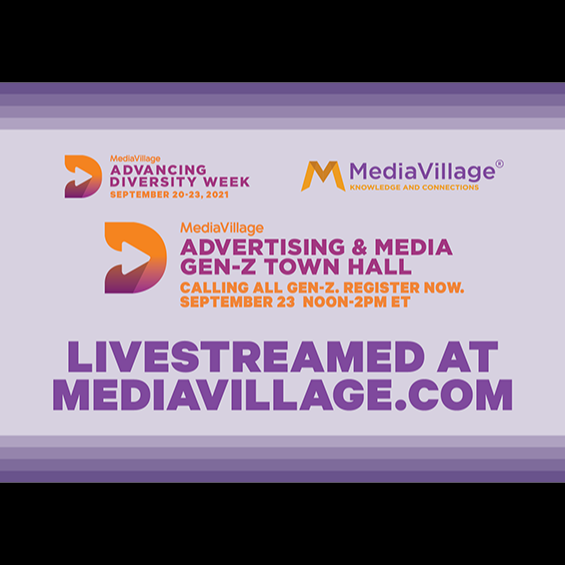 Advancing Diversity Hall of Honors Inductees and Council to Meet with GenZ Team Members in Town Hall Assembly. Register here to secure your place via Zoom.

As part of the inaugural Advancing Diversity Week program of more than 30 panels and 80 speakers, the media, advertising, marketing and entertainment community is joining to encourage and facilitate a dialogue between senior leaders, diverse college students exploring careers and early-stage team members in the media and advertising community, MediaVillage and AdvancingDiversity.org are hosting the inaugural virtual GenZ Town Hall Assembly, focused on addressing and improving talent retention by advancing diversity from advocacy to activism and from inclusion to belonging.

A powerful goal for the September 23rd two-hour "all hands" diversity-focused event from noon-2 p.m. ET is to promote open communication among senior management, DEI leaders and the new generation of employees. Register here to secure your place via Zoom.

All professionals in the first five years of their careers, students, educators and college administrators are invited to participate in the three-day Advancing Diversity Week panels and can view them live streamed at MediaVillage.com and can also register for the interactive Zoom at MediaVillage.com.

This inaugural collective industry Gen-Z Town Hall event will feature leaders from the ten 2021 Advancing Diversity Hall of Honors Inductees (see below) and Advancing Diversity Council members from Disney Advertising Sales, Twitter and WarnerMedia, sharing questions from the audience of more than 1,000 GenZ team members from AdvancingDiversity.org and supporters and MediaVillage member companies. Questions will be curated by three leading MediaVillage journalists and columnists, who will invite the questioner to the Zoom "stage" to engage personally with the Hall of Honors inductees and Council members. The Town Hall will be moderated by MediaVillage and AdvancingDiversity.org founder Jack Myers, The Female Quotient Chief Innovation Officer Ronda Carnegie and AdvancingDiversity.org executive director Philip McKenzie.

The Town Hall meeting will open with a brief "State of Affairs" presented by Marc S. Pritchard, Chief Brand Officer at P&G and Chairman of the Association of National Advertisers (ANA) and Marla Kaplowitz, president of the American Association of Advertising Agencies (4As).

MediaVillage journalists who will both curate audience questions and probe for more in-depth details include Kelly Kozakevich, host of the #AskGenZ video interview series; Juan Ayala, host of the Multicultural TV podcast and Kate Byrne, editor of the WomenAdvancing video series.

"Our approach is to facilitate an open 'assembly' to give team members who have recently joined our community a voice and role as the media and advertising industry competes for diverse talent across a spectrum of diverse communities," Myers commented.

The FQ's Carnegie, who co-founded the Advancing Diversity Council, added, "Our hope is to harness the next generation to advance diversity perspectives and industry growth based on proven programs and initiatives with a path forward."

McKenzie, who hosts The Pool podcast, explained, "Our intent is to minimize the gap between management and employees, improving industry and company culture, growing team spirit, and reversing the trend toward young people leaving the industry to pursue new career goals."

In addition to leaders of Twitter, Disney Advertising Sales and WarnerMedia, the Advancing Diversity Hall of Honors Inductees who will be sharing their personal and organizational stories and responding to audience questions and comments are:

Register here to secure your place via Zoom.