With the 2020 election still more than a year away, industry analysts are forecasting that candidates will spend a record amount on advertising. Local television is expected to be the largest recipient of these ad dollars, but candidates are continuing to invest more in other media, including OTT and local cable and digital.

GroupM estimates an increase in spending for political ads reaching a staggering amount of $10 billion, an increase of 59 percent from the 2016 election year, when an estimated $6.3 billion was spent.

While broadcast TV will remain the dominant medium with a 53.3 percent share, the biggest gains are expected to go to digital media, which will nearly double to $1.2 billion in 2020 from $650 million in 2016.

Regardless of the specific numbers, there is plenty of opportunity to go around in this presidential election. So, how do you secure ad revenue and capitalize on emerging campaign channels?

In our special report " Campaign 2020: The Race for Advertising Dollars," our team of research analysts highlight exactly which decision-makers and agencies work with each candidate. Through this intel, you and your team can capture revenue coming out of these political campaigns by discovering who controls the purse strings and where they are allocating dollars.

Below is a sample of the type of intelligence we cover in our report, including digital spend by candidate, top networks, and purchase channels. 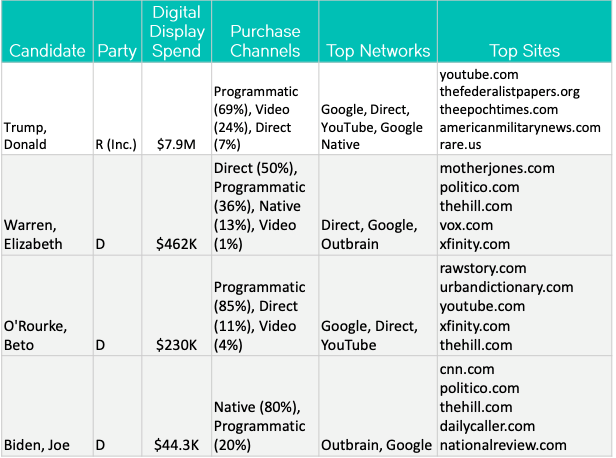 It appears that digital is now surfacing as a dominant force, a distinction that some candidates are beginning to realize. It pays to go with what's proven, hence the significant digital spend noted above. Of the $6 billion in political spending this cycle, Kantar expects 20 percent, or $1.2 billion, to go to digital.

Politicians are also getting savvy in the programmatic space, with some even hiring adtech specialists to manage their online marketing campaigns. This move could mark a significant cultural shift in the way campaigns unfold, and the 2020 election could be the changing tide.

This new campaign tactic could be the difference-maker for candidates looking to stand out. According to reports, programmatic buying comprised 60 percent of political digital ad budgets. Programmatic advertising delivers speed in launching campaigns, optimization, and precise audience reach, making it a core component of a winning strategy.

Dollars behind digital advertising are giving presidential candidates the ability to build support through direct access to voters, improved analytics, and personalized messaging, just to name a few advances.

Digital is playing a bigger role by bolstering traditional media channels, including TV, radio, newspapers, and magazines. The medium provides extended reach and a more targeted approach, especially when it comes to younger voters. According to reports, U.S. adults now spend an average of six hours per day with digital media. In 2019, digital advertising is projected to reach 54 percent of all ad spending in the United States.

The digital strategies that campaigns use allow more direct interaction with voters through channels such as SEO, pay per click, and blogging. This allows candidates to ensure messaging is exactly what they want it to be, and also gives them the opportunity to interact with voters online by answering questions directly and making comments.

With direct access and the ability to customize messaging instantly, presidential candidates now have the luxury of personalizing the content they send out. As these efforts are made throughout the race, digital marketing also provides actionable analytics to measure the success of any campaign.

Analytics makes it possible to see what's working, make shifts quickly, and implement different strategies that will lead to more success in the campaign. With an extended reach and the agility of digital, it's no surprise that digital efforts are ramping up for the 2020 election, gearing toward earning the individual vote.

Download the full report today to see spend detail across all presidential candidates.