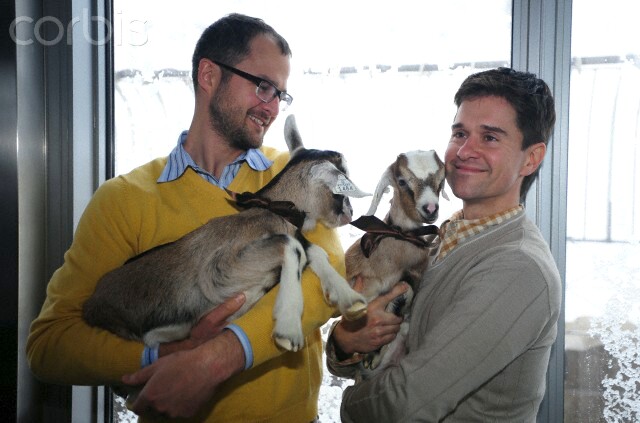 Sometimes change happens fast. Sometimes it happens not at all. And sometimes change happens in stages, so that only when you look back do you notice how much ground has been covered. Madison Avenue -- and all of us -- will be reminded of that Oct. 6 when the media giant Meredith is to bring out a new publication, the Beekman 1802 Almanac. It's intended as a premium product, more akin to a book than a magazine, and as a contemporary version of those almanacs once relied upon by farmers. To underscore how contemporary the Beekman 1802 Almanac is meant to be, it's a partnership between Meredith and a same-sex married couple, Josh Kilmer-Purcell and Brent Ridge (pictured above).

Kilmer-Purcell and Ridge own and operate a farm in Sharon Springs, N.Y., that has birthed a brand, Beekman 1802, which includes crafts, food, books and personal-care products. They appear on the cover of the premiere issue, dated Fall/Winter 2015, and are posed in a barn window with a kid (the baby goat kind). Readers are invited to gather "Food, home and garden inspirations fresh from the farm" and "Cultivate a better life."

This is the initial venture from the pair's new initiative, Beekman Media. And it may well be the first national lifestyle publication aimed at the general market to be conceived and co-edited by a married gay couple serving in the same capacity that personalities such as Martha Stewart and Oprah Winfrey do for magazines bearing their names.

(A married same-sex couple, Nate Berkus and Jeremiah Brent, is the subject of the cover story of the October issue of Architectural Digest, appearing with a kid, the baby human kind. So far, no word from Advance Publications on a Nate & Jeremiah magazine.) 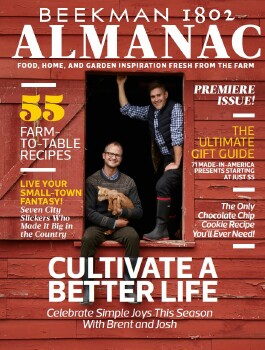 interview ahead of his company's Oct. 1 announcement of the publication.

"I've been in my group for 16 years and I've watched the world change," Kouma said. "Just showing a same-sex couple, you could count on feedback, letters, complaints." Fast forward to recent focus-group panels that helped develop cover concepts for the Beekman 1802 Almanac, he added, and it was "a zero issue."

Kilmer-Purcell and Ridge were introduced to America in 2010 through a cable reality series, "The Fabulous Beekman Boys," about how two urbanites adjusted to rural life. Two years later, they won the 21st season of "The Amazing Race." Their skills at branding come naturally: The couple purchased the farm in 2007 when Kilmer-Purcell worked at J. Walter Thompson New York and Ridge worked at Martha Stewart Living Omnimedia.

"What we've done with Beekman is harkened back to more traditional times, old-school things, and modernized them," Ridge said in an interview in which he was joined by his husband. "We know there's an audience for better, long-form content, but what is the business model to deliver that?"

The answer, Ridge suggested, is a publication along the lines of independent niche magazines such as "Sweet Paul, Kinfolk, Lucky Peach" that is backed by the expertise and clout of a print behemoth like Meredith.

"Meredith is so strong in the lifestyle segment that we thought of them for a fresh take on proven lifestyle formats," Kilmer-Purcell said. "The goal is to make it a quarterly magazine and publish it seasonally."

The couple and Kouma described the premiere issue as a test, adding that the initial print run, 200,000 copies (at $9.99 each), could be increased if there's strong response. "It's our first foray into the premium, 'bookazine' format, with higher-quality paper," Kouma said, "something you'll keep around for a while."

It's also an exploration by Meredith -- whose signature titles include Better Homes and Gardens, Family Circle and Traditional Home -- of a different editorial approach to respond to the challenges publications are confronting in single-copy sales.

"I believe we've already lost the casual consumer" who occasionally shopped newsstands or at supermarket checkouts, Kouma said, because "they're on their phones, not looking at magazines." Allying with a brand such as Beekman 1802 and the couple behind it may act as an antidote, he added, because "Beekman has built a consumer base already" with, among others, Millennials, folks interested in the "maker" and back-to-the-farm movements and nontraditional families.

When Kilmer-Purcell and Ridge "announce to their fans this is coming, they'll go out and look for it," Kouma predicted.

In addition to newsstands, the debut issue of the Beekman 1802 Almanac will be available at Target stores nationwide, Kilmer-Purcell said, appearing in displays with "a food line we're launching with Target in November, the Beekman 1802 Farm Pantry, 48 new products with ingredients sourced from small farms."

Target is an advertiser in the premiere issue. Kilmer-Purcell and Ridge appear in four other ads, for the Country Inns & Suites division of Carlson, Evine Live, Overstock.com and Time Warner Cable. The latter, for the Business Class service offered by Time Warner Cable, echoes a commercial in which the couple also is featured -- another sign of change since only recently have married same-sex couples arrived in mainstream ads.

Kouma, who called himself a longtime fan of Kilmer-Purcell and Ridge, said, "It's pretty impressive what they've built," not so much because they're a same-sex married couple but more because "they can do what they do as a married couple."

"We certainly know to be true," he added, laughing, that collaborating on the kinds of tasks they specialize in, such as home renovations, is "one of the reasons relationships don't work out."