MediaVillage.com Backstage at “Dancing with the Stars” 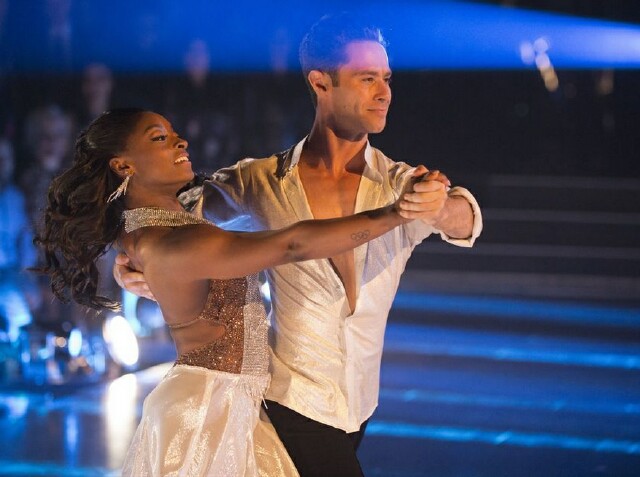 ABC’s Dancing with the Stars returned last night for a 24th cycle that saw its stars, ranging from Spanish dynamo Charo to modern legend Mr. T, treading the boards with eyes firmly planted on that coveted Mirror Ball trophy.  But it wasn’t only the celebrities that deserved time in the spotlight. The evening marked a true milestone -- the 400th installment of ABC’s long-running and still vital franchise. (Editor’s note: Throughout this cycle, MediaVillage.com correspondent Steve Gidlow will be embedded backstage during the show and will talk with the stars after each telecast. His first report follows.)

Fifth Harmony singer Normani Kordei and her dance partner, reigning ballroom champ Valentin Chmerkovskiy, quick-stepped their way to a respectable score of 27.  Kordei proved her dancing skills were on par with her vocal prowess. “You are committed,” raved sometimes cantankerous judge Len Goodman. “That was first class.”

There was no bull about it when rodeo star Bonner Bolton and partner Sharna Burgess executed a fine Cha Cha.  Bolton, still recovering from a broken neck, and Burgess were awarded 22 points for their efforts. Bolton’s good looks sent judge Carrie Ann Inaba into a tailspin, while frisky judge Bruno Tonioli praised his “forward thrust.” (Judges Carrie Ann Inaba, Len Goodman, Julianne Hough and Brunol Tonioli are pictured below, left to right, with host Tom Bergeron.) 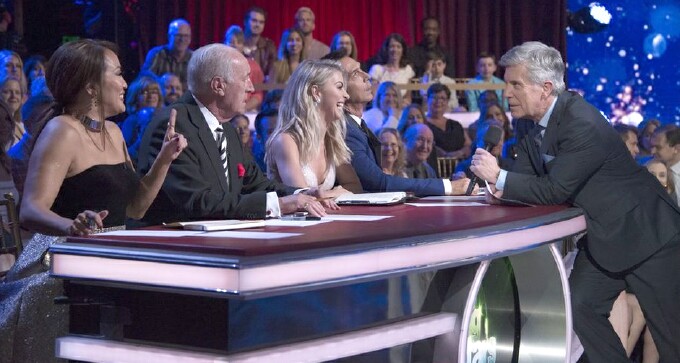 “I’m so grateful for the judges’ gracious comments,” a reserved Bolton told me after the show. “I know there’s probably a lot more they could’ve picked on.  I’ll start to step it up more next week.”

“He hasn’t done anything like this before and hasn’t competed in over a year since he broke his neck,” Burgess added.

Bolton called the show “a whole new rodeo” and said he was approaching it as an extreme challenge. “It’s something that I might not be able to do,” he admitted. “I knew I could epically fail, or succeed. That’s kind of how it is in my sport; you’re either all in or you eat dirt.”

Burgess noted that while the couple has “great chemistry” the show is actually helping the cowboy on his road to recovery.

“It’s really helping my posture,” Bolton explained. “I do feel I’m getting stronger and while it’s taxing, I’m growing and have more and more respect for these dancers.”

DWTS was a long time coming for multi-faceted entertainer Charo, who was right at home in the show's signature wardrobe dancing a salsa. She and partner Keo Motsepe (pictured below) scored a respectable 21 for the dance, but that score didn't sit well with the Spanish superstar.  She had to be held back by her partner from pouncing on the judges after being scored. 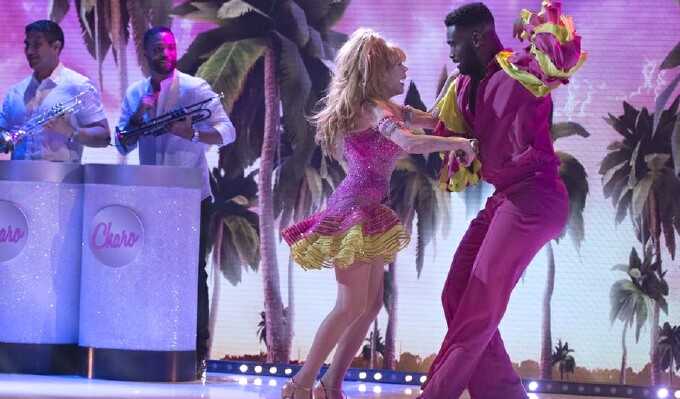 “I was convinced I was getting a ten,” she declared after the show. “I have 20/20 vision so I don’t need glasses, and when I saw those numbers, that’s when I got pissed off!  I was very happy! I was moving like I had ants in my pants! But those suckers gave me low scores!”

Charo, who cancelled three months of engagements to commit to DWTS, said there will be a big problem if she’s not in the finale. “I passed up a lot of other jobs, big time, so if you don’t see me on the show I’ll be washing windows all over Beverly Hills.  This is a gamble and a challenge and it’s about time I did it!”

Chris Kattan paid homage to his A Night at the Roxbury character Doug Butabi, with a head-bobbing Cha Cha to the Haddaway hit “What Is Love” from the film. The tribute seemed lost on judge Goodman.  Kattan and partner Witney Carson received the lowest score of the evening (17), but that didn’t phase Kattan – who, like Bolton, is also dealing with the prolonged aftermath of suffering a broken neck – in Kattan’s case following a stunt 20 years ago.

“I’m excited not to have to do the head bobbing next week,” Kattan said after the show.  “I’m not supposed to do [the head bobbing thing] as I’ve had four surgeries and did have to be careful for a long time.”

He said the timing was perfect both mentally and physically to appear on DWTS as he’s finally healed enough. But Kattan’s injury has proven to be a challenge for his partner Carson.  “The first two weeks have been a lot of tests and trials to see what Chris can and can’t do,” she told me. “But this guy’s fearless and really just goes for it.”

For pro-baseball player David Ross, his quickstep with partner Lindsay Arnold couldn’t have gone better, as they scored an impressive 28.  “I can’t dance,” the recently retired World Series champ admitted. “That was more fun than the World Series!  I felt like I did a good job.  I’m a back-up player who’s won two World Championships and this is a lifetime experience I’m going to have fun with.” 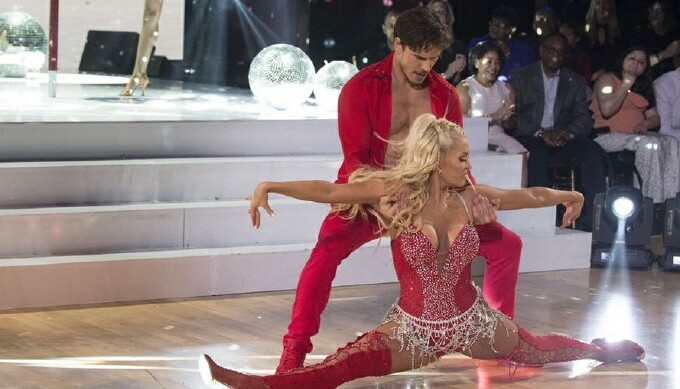 When it came to getting something new for the woman who “has everything,” pro dancer Gleb Savchenko delivered a unicorn to his Real Housewives of Beverly Hills partner Erika Jayne for their salsa. (Erika and Gleb are pictured above.) The judges awarded them 24 points and Erika was thrilled. Dancing to her own song, “Expensive,” when it came to her look and outfit the notorious style maven (who always has her own stylists and hairdressers on hand) revealed this time she’s leaving it all up to the team at DWTS. “I’m in their hands,” she laughed. “It is hard to relinquish control, but when you have an accomplished partner and someone you believe in?  I mean, who comes up with the unicorn? It’s never been done here.”

Glee star Heather Morris entered DWTS amidst much controversy. The one time Beyoncé back-up dancer and partner Maksim Chmerkovskiy scored 28 for their Viennese waltz. Morris tried not letting the pro backlash get to her. “I tried to take it all with a grain of salt, and not pay attention to social media too much and not let it get to me,” she said of the recent online griping.

Chmerkovskiy (pictured below with Morris) has high hopes for the duo, and was happy with the way the night went. “I’m not saying we tried to underperform or take it easy,” he told me. “We did our best; but this was sort of like a crash course in frame and posture, things that Heather is completely unfamiliar with.” 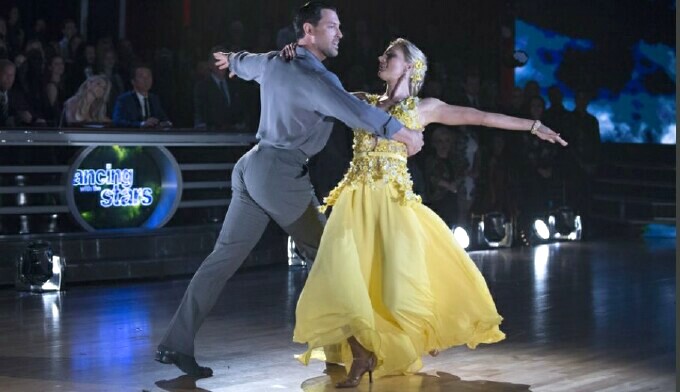 Returning pro Kym (Johnson) Herjavec was all smiles about her partner Mr. T after their workout inspired Cha Cha. The A-Team star was praised for his tenacity by the judges, but for Mr. T it’s all about, “not quitting,” he said.

“The main thing is, I brought it,” he enthused after his dance. “It gave me a chance to practice what I preach.  It’s the first week and I want to rise like the phoenix!  If I’m telling kids, ‘Don’t quit or give up,’ I have to live it.”

Herjavec told me she’s a huge fan of her partner and that dancing with him is surreal. “It kind of becomes your new normal,” she said.  “It’s bizarre to say ‘I’m dancing with Mr. T,’ but he has great stories and such a great energy.”

Nancy Kerrigan and Artem Chigvintsev beautifully executed their Viennese waltz.  It was no surprise the judges awarded them 28 points for their efforts.

The Bachelor star Nick Viall – an ABC fixture this year to date -- said he was happy to be done with the first dance, telling me after the show that despite any mistakes he made he was impressed with the 24 he scored alongside partner Peta Murgatroyd.  “I keep hearing that this is a once-in-a-lifetime opportunity,” he said with a smile.

Viall, with new fiancée Vanessa Grimaldi in the audience supporting him, also received the best endorsement from his partner (who danced alongside another Bachelor alumnus Sean Lowe in a previous season) saying, “He’s 100% the best Bachelor so far!” (Viall and Murgatroyd are pictured below.) 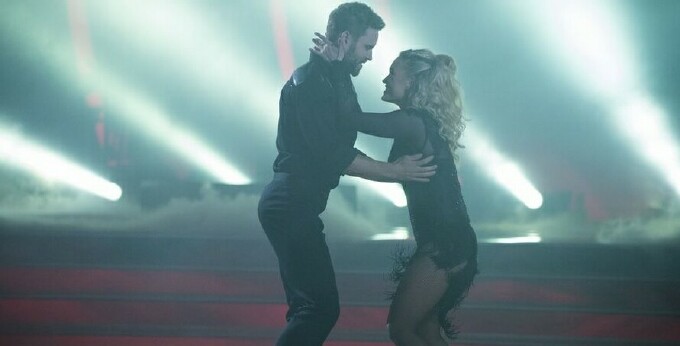 Despite feeling “super nervous,” football star Rashad Jennings and partner Emma Slater, Cha Cha-ed their way to a score of 31. Not bad for a guy who thought he could easily dance, but received a major awakening after joining the cast.  “I’d watched the show before and said ‘I think I could do that’ to friends and family,” he laughed. “But after practicing with Emma for a week, I realized I couldn’t dance at all.”

Jennings now has major respect for the art of dance and actually thinks it’s only going to help him in the long run. “It’s going to make me a better football player,” he said. “I’m using some of the muscles I didn’t even know I had and I’m so happy about this.”

Olympian Simone Biles was another to enter the competition with added pressure. “I tried not to think about it, but there is a bit of pressure because all of the gymnasts have done really good,” she said after her dance.  “I just tried to be myself and have fun.”

As former contestant and mirror Ball champ Laurie Hernandez cheered her on, Biles and partner Sasha Farber (pictured at top) danced their way to highest score of the night, with a 32 for their tango.

“It was such a comfort having Laure sitting in the audience,” Biles beamed. “I think I did them proud. I really did try really hard.”

The competition continues next week with the first elimination of the season Monday at 8 p.m. on ABC.