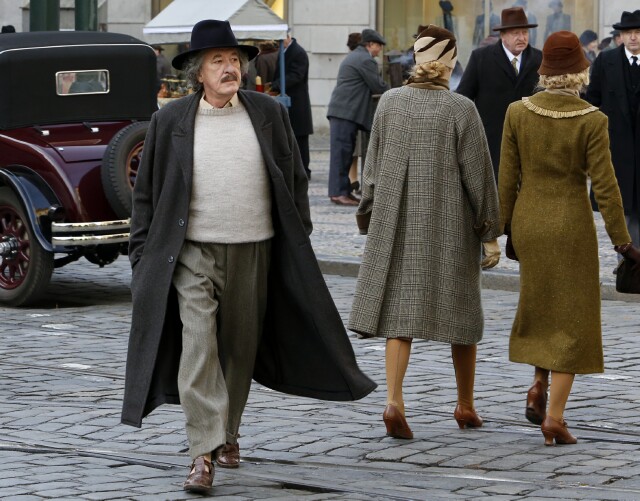 Prague -- Geoffrey Rush, made up to look like Albert Einstein, sits perfectly still on a cavernous soundstage in the midst of a set meticulously recreating the physicist’s Princeton home. As the crew buzzes around him, Rush (pictured above) remains as frozen as a statue. The Oscar winner is smart to conserve his energy; he has the lead role in season one of National Geographic’s epic anthology Genius, its first scripted drama series. Genius premieres in 171 countries and 45 languages on April 25.  Ron Howard and Brian Grazer are the executive producers; Howard directed the first episode.

“We felt that Albert Einstein was perfect to launch the series because as much as people know about him, that’s a snapshot, an impression, an image,” Howard told me. “His life is so full of drama. You could not pack his life into a movie. It was reductive and now we get to share it in a compelling and engaging way.”

A feature film had been executive producer Gigi Pritzker’s original goal when she optioned Walter Isaacson’s book Einstein: His Life and Universe.  After years of searching for the right script, however, she realized it needed to be serialized -- and presented in a way that found the humor, the adventure and the passion behind the physicist’s life.

“There will be people who say, ‘Yeah, it sounds dry and boring,’” Pritzker said. “I think the way National Geographic is positioning it and putting an ad on the Super Bowl -- the ad was brilliant and funny and lowbrow and highbrow and for me [they have] absolutely the right sense of how to have fun with this and not get bogged down.”

“National Geographic has been very ebullient about busting open their brand,” Rush declared. “They are very keen that they are now exploring not just the chronicles of the natural world, but the story that goes around it.”

The executive producers made it quite clear this is not a documentary, but a fact-based series in which they use cinematic magic to illustrate how one of the greatest physicists changed the way people think.

“We were fortunate to pilot that in A Beautiful Mind and we found a way to do that, which was quite accessible in movies or television,” Grazer explained. “You have to create the cinematic experience.” 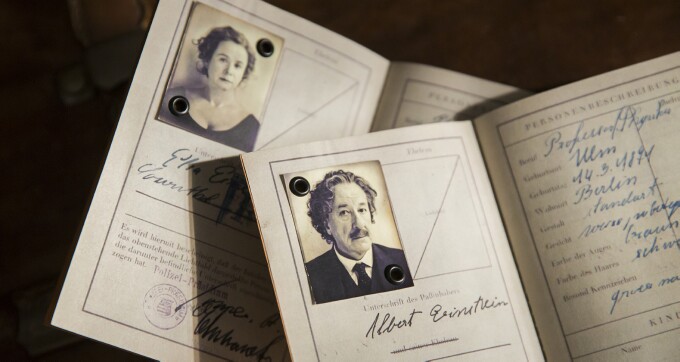 Keeping with the series’ dedication to accuracy, Rush spent months perfecting his German-tinged English accent and learning the violin. That really was him playing Lady Gaga’s “Bad Romance” during the now-famous Super Bowl commercial.

Hours after Rush had sat so stone still, finally freed of the halo of crazy Einstein hair and trademark mustache, the 65-year-old actor relaxed over a double Chivas and divulged how he achieved that level of Zen while controlled chaos swirled around him.

“I like to go on an app and listen to show tunes,” Rush revealed. “I went onto comedy and musicals and today I was listening to endless remakes of ‘Anything Goes’.”

Rush and Johnny Flynn, who plays Einstein from his teen years to mid-30s, when Rush takes over, spent time together to match their mannerisms so their performances would meld. Taking deep dives into research, they discovered that Einstein was quite the lover.

Women, it seemed, adored the disheveled professor -- and despite having two wives, he loved many of them back. Often. His second wife was his cousin, Elsa, portrayed by Emily Watson marking her third time playing Rush’s spouse, while Samantha Colley plays Mileva Marić, Einstein’s first wife.

A brilliant mind in her own right, the spirited Marić was an early sounding board for her husband’s theories -- although she eventually grew frustrated catering to the distracted genius. “He needed propping up and cheerleading,” Colley explained.

Their eventual divorce was something the scientist never quite got over, said the actress, who studied the letters between the couple. “He often said, ‘Mileva will always remain a severed limb,’” Colley noted.

The couple lived together in Prague in a nondescript apartment building, now bearing a plaque. On these worn cobblestones, Einstein walked to a friend’s salon in the old town center and taught in the university, where his classroom overlooked an insane asylum. The exquisite city stands in for other European cities of Einstein’s time.

Directors, producers, stars and crew can’t help but reflect on how the xenophobic turbulence of Einstein’s era -- and the increasing violence against minorities -- is on the rise today. Einstein, a Jew who was out of Germany when Hitler became chancellor, never returned to his homeland.

At the time, FBI Director J. Edgar Hoover, convinced Einstein was a spy, tried to keep him out of the country. T.R. Knight, of Grey’s Anatomy, is unrecognizable as Hoover under layers of prosthetics. Over breakfast, he recalled studying these men and that period and shook his head over today’s parallels.

“People did say then that it would never happen again, and it did,” he said. “It is uncomfortable and very disturbing.”

“Undeniably one of the obstacles Einstein faced was a rise in a kind of nationalism that was threatening to him and to his work and to his existence,” Howard said. “And it was emerging out of a time of struggle and this political rush toward nationalism.”

As the world tunes in to learn about Einstein the lover, the immigrant and, of course, the thinker, those behind the series are doing a bit of thinking of their own: Who will be the subject in the next season of Genius?

“The qualifications are so high,” Grazer mused. “It has to be proven that that person has done remarkable things on a global basis and also has a dynamic enough life that will engage audiences. Did that human being create a movement of any kind? Ultimately, we want to surprise people.”