“Meet the Peetes” Is a First for Hallmark Channel 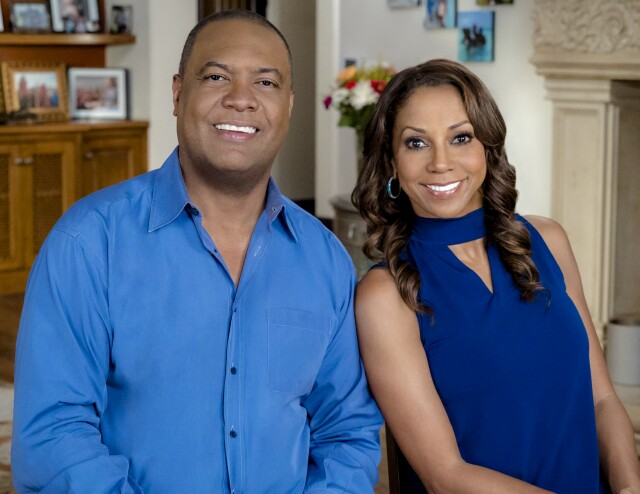 When actress, activist, producer and author Holly Robinson Peete received news in May 2017 that her family based reality series For Peete's Sake (which ran for two seasons on OWN) had been canceled, she knew it wasn’t the end of the world, or the show for that matter.  She did what any hardworking mom would do -- she went shopping.  “When I realized that we were a free agent, I actually reached out to Hallmark as I thought it would be the perfect marriage and a great relationship,” Peete told MediaVillage in an exclusive interview.  “It was really a no-brainer as I’d done a Christmas movie called Angel of Christmas, so I had a taste of the Hallmark experience and I just loved it.  (Peete also recently starred in the movie Morning Show Mystery: Mortal Mishaps on Hallmark Movies & Mysteries.)

“I started getting invited to Hallmark parties and thought to myself, this is fun, I want to be here,” she continued.  “There’s something about Hallmark that’s like a big family. They’re very talent-driven and talent friendly. They understand our needs as actors and have a real appreciation.  I get that feeling from Hallmark and it feels like home.  After doing the Christmas movie I just wanted more so as the discussions opened, we were like, 'Why not continue telling our stories at the Hallmark Channel?'  And here we are!"

Meet the Peetes (as it is now titled), which debuts on Hallmark Channel on Sunday, February 18, marks a first for the network, too, as it’s their first foray into the world of unscripted television.  Despite the change in name and television home, Peete insists fans of the original series won’t see significant changes in the Hallmark incarnation.  “Obviously, we are the same family so it's not going to be that much different, she said.  “It's positive television on a different home.  Hallmark Channel is very authentic and they get us, they understand the kind of family we are and how we want to move forward on TV. We have a lot more Peete plots and more stories to tell and I can't think of a better place to tell them than at Hallmark.

“I'm also an executive producer on the show,” she added.  “We're working with a great production company called Tremendous Entertainment.  We've done 16 episodes with them, so they know us and understand us.  The show is really gonna be much more of the same and we’re getting to expand the themes of our philanthropy with autism and some of the positive things we are doing in the community while chronicling our day-to-day lives.”

For the Peete family, autism has been at the forefront since their son R.J. was diagnosed with it as a child.  Peete has written two books on the subject and admits having the chance to de-stigmatize autism was a major factor in her reluctantly moving into unscripted television.  “Reality TV is a genre I never saw myself in,” she revealed. “But Meet the Peetes is a great concept in which to do great reality and a concept we haven't seen a lot of yet.  The genre can be unsavory, but we wanted to talk about a family that is aspirational, inspirational and positive.  We aren’t perfect by any stretch and we're just trying to get along in life and have had a lot of issues in our lives.

“When it comes to the stigma of autism, our work isn't done,” she shared.  “I always say I wouldn't change R.J. for the world because he's such an awesome kid, but I would try to change the world for R.J.  You want to shift the community out of the stigma and thinking these kids are less than they can be, really valuable people in the community.  Technology has also been very helpful and there are tools available now that really help people with speech difficulties and things.  We will definitely be using our platform to advocate for them.”

In addition to her work with autism and playing working mom to R.J., Ryan, Robinson and Roman, and wife to hubby Rodney (pictured at top with Holly), Peete told me she will also be using the show to help raise awareness of a disease that has touched her family before -- Parkinson’s.  Her father passed from the disease, and her brother Matt has been diagnosed with early stages.  “We're hoping to show other people the things that [Matt] is doing,” she says.  “It’s early stages, but it's a young onset like my dad who was only 46.  Matt is 55.  The premiere episode, Let's Get This Party Started, features Holly and Rodney preparing for their twins, Ryan and R.J., big 20th birthday party, but getting the whole family under the same roof will be tricky. But between all the party planning and parenting their other two teenagers, Holly and Rodney start to realize their kids are growing up fast. Are they really ready for their nest to be empty?

“We are a funny family, but there are serious issues going on,” she concluded. “My husband had a long football career and is now dealing with the physical stuff and moving to the next phase.  The kids have also gone through things.  But we are bonded as a family, so it's refreshing to be able to do something positive and talk about the way we deal with it.  I mean we have our ups and downs, but we do it all in a positive way and with humor.  I think this is something that’s really going to show on this Hallmark version of Peete's and I'm really excited about it because it's a perfect fit.”

Meet the Peetes is telecast Sundays, 10 p.m. on Hallmark Channel.