Memo to Democrats: Here's How to Add a Real Debate 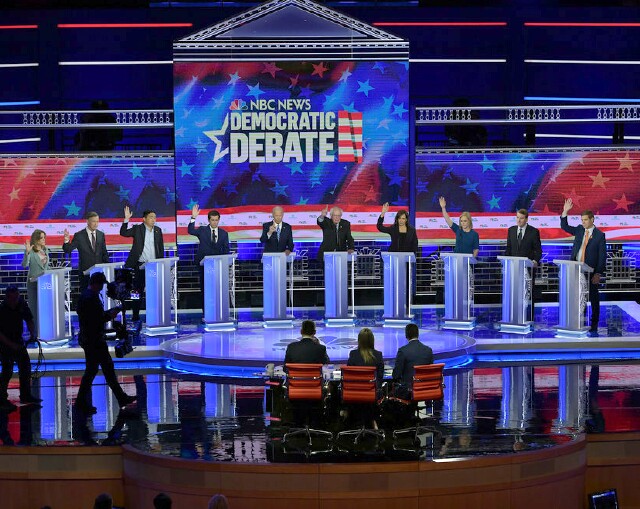 With one primary campaign debate down and eleven more to go, the commentariat already is picking winners and losers among the Democratic Party's two dozen presidential hopefuls.  Like actors after a Broadway opening night, the Democrats on stage in Miami last month have poured over the reviews.  The voters should ignore them.  If the two evenings and the after-action analysis have revealed anything about the candidates' qualifications to be President, it's purely accidental.  Count on their debates in Detroit on July 30-31 to be just the same.

The problem with these events isn't the news media's usual "horserace" reporting or the pundits who overthink the back-and-forth.  Both are par for the course.  Nor is it the moderators' fault; the journalists in Miami mostly did their best.  Rather, the late Neil Postman's "Amusing Ourselves to Death," a brilliant analysis of television's influence, diagnosed what ails the contests 35 years ago.  "Television," Postman wrote, "speaks in only one persistent voice -- the voice of entertainment."  The Democrats could help voters serious about judging the candidates' presidential qualifications by taking a modest suggestion: add some real debates.

Postman, who didn't live to see the ascent of the Web and social media, didn't leave behind his critique of the presidential debates of his day.  Even so, it's not hard to infer what he likely thought.  "Serious television," he wrote in 1985, is "a contradiction in terms."  In Miami the Democrats couldn't have done a better job of making his point.  At an event where people are supposed to contend over issues, ideas and values, the criteria for the debaters' success on stage were obvious: with camera-wise poses and tweet-able declamations, Instagram, not intelligent commentary, ruled.

To be fair to the candidates and the party's debate organizers, the numbers are a challenge: setting up a fight, not to mention competing in one, is tough when a dozen contenders are in the ring.  But format isn't the biggest, or even most important issue.  In a media world where politicians have dropped reasoned rhetoric for Snapchat smiles and 280-character quips, the opportunity to assess how the candidates present and defend their policy positions is all but non-existent.  For voters interested in watching debates that showcase such skills, the question is obvious: Why bother?

Political pros and campaign consultants, of course, would dismiss the complaining.  After all, when candidates hit their marks on camera, viewers can become their voters.  Miami's two nights drew an audience of 28 million.  Soliloquies on the issues or not, people are paying attention.  If the on-stage cast can impress with slogans and self-confidence, rather than defend what they want to do and why, who cares if their so-called debate looks like a Looney Tunes version of the Oxford Union?  Ask the Republicans: facing a reality TV star who didn't know a thing, their 2016 primary casualties testify to the folly of talking substance, rather than trash.

The pros have a point.  With second jobs and soccer games, most people don't have time to dig into how to reform health care or make nuclear arms deals.  Candidates at best have a few minutes to impress voters whose decisions, for better or worse, turn on perceptions rather than policy views.  Paul Aldo, a psychologist who has researched and written extensively on executive presence, notes that leaders stand out, among other reasons, because of the effects of their bearing, confidence, clarity and vision on those around them.  His insight applies in spades on TV where, to influence viewers, a candidate's image needs to present those qualities in bold face.

Nonetheless, the current televised debates still beg a big question:  In helping voters make their choices, is this the best we can do?  When it comes to TV exploring more seriously presidential qualifications, Postman wouldn't have been optimistic.  Television politics doesn't permit us "to know who is best at being President," he wrote.  "The politician does not so much offer the audience an image of himself, as offer himself as an image of the audience."  From one candidate's story of grade school busing to another's spontaneous Spanish soliloquy, Miami's performances last month would have amused Postman to death.

Could the current debates improve?  Winnowing the field might help, but even a smaller roster is unlikely to change the current debate format much.  For one thing, among the 20 or so contenders only a few, such as Elizabeth Warren and Bernie Sanders, are campaigning on detailed policy proposals.  History also suggests American politicians have never liked going head-to-head on the issues.  Debates didn't figure prominently in presidential elections until the Republican primary in 1948 when Tom Dewey took on Harold Stassen.  The 1960 Kennedy-Nixon debates were the last until 1976, when they finally became a fixture in presidential campaigns.

In the final analysis, with the current substance-free Democratic debates falling short, helping Americans understand whether the candidates are prepared to be president is important.  Intelligence Squared Debates, a nationally broadcast, non-partisan debate series on the major issues, provides an example of how that could be done.  One possibility based on its approach: a randomly seeded roster of candidates who compete in one-on-one debates on leading domestic and foreign policy topics.  The hour-long programs, produced as podcasts, could be offered for broadcast as well as streamed.

For the candidates, the added forum offers the opportunity for earned media exposure as well as raw material for their advertising campaigns.  For voters, it would be a chance to see the contenders present and defend how they would handle the country's challenges.  The media industry has the resources and outlets to support a second tier of debates.  It's not hard to imagine Neil Postman saying, "Never happen."  For once, it would be nice to prove him wrong.