Meredith Presents the First Ever BrandFront

By Simon Applebaum September 15, 2016 Tomorrow Will Be Televised Archives 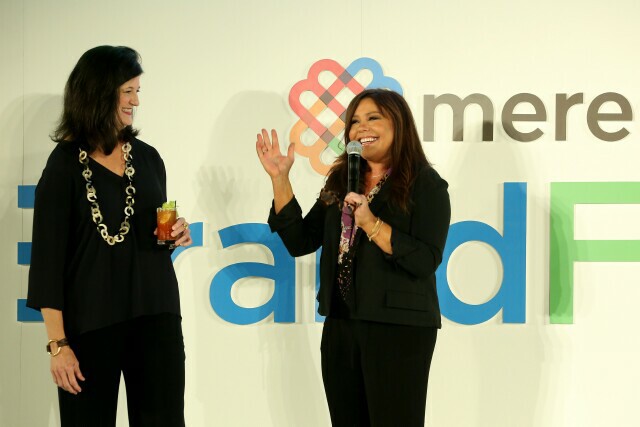 Someone was bound to disrupt late summer or fall with an Upfront-driven event. That annual honor usually goes to a cable ad sales rep firm. Leave it to Meredith, the lifestyle magazine publisher and TV station owner, to usurp that role this past Wednesday and to do so in an original manner with its presentation of the first-ever BrandFront.

Venue: Prince George Ballroom on 15 E. 27th St. between Fifth and Madison Aves. It's been years since this place was home to an Upfront, namely Ion Television.  It's easy to figure why.  Although the ballroom itself is spacious, the passageway between the front door and the ballroom is so long and narrow it can easily get clogged with people, depending on volume.  Organizers took full advantage of this space by making the walls come alive with logos, photos and original art, while waiters served breakfast appetizers and attendees picked up their name tags at one table, then enjoyed coffee and tea in large silver mugs at another. A house disk-jockey played a pre-presentation set near the entrance. The ballroom stage was compact, with video screens on top of the stage wall. Grade: 3 Jacks for the venue itself; 4 Jacks for the setting and service.

Presentation: Organizers labeled their display a BrandFront and quickly revealed why. Instead of a focus on programs or dayparts or seasonality, advertisers and agencies present were invited to join Meredith in a quartet of new annual community outreach campaigns launching next year. Each campaign has cross-platform elements connected to a group of publications and comes with one or more public service charities on board. To demonstrate the latter point, content chiefs from various magazines introduced each campaign in rapid-fire fashion, accompanied by a charity founder. The elements include original short and long-form video series, magazine features, Web site content and smartphone/tablet applications. (Special Note: Meredith is in discussions to distribute all these video series and apps on smart TV sets and devices such as Roku, Apple TV, Google Chromecast and Amazon Fire TV early next year.) Under the overall banner "Partnerships That Will Change the World," the campaigns are "Give," inviting Millennial women to volunteer or donate money to lifestyle causes; "Protect + Connect," focusing on safe home design and technology; "Strive," promoting better eating and exercise habits, and "Lead," offering counseling and investment in new ventures from women entrepreneurs. Participating charities include GOOD+ Foundation and Movemeant Foundation. Grade: 4 Jacks

News: At least 20 new lifestyle video series will premiere next year, and several of them will be joined at the hip with one outreach. Office Hours, an up-close look at women business leaders by Today recurring expert Lilliana Vazquez., will be an element of "Lead." Other series ahead include Trainer Talk and Fitness Fridays (using material from Shape magazine), and Eat Clean and Every Day Food (derived from Martha Stewart's monthly publications). Separately, Meredith will supervise production of Dinner Spinner, the TV half-hour adapted from AllRecipies’ popular recipe app. Spinner debuts October 1 on The CW as part of the One Magnificent Morning Saturday block organized by Litton Entertainment. Grade: 3.5 Jacks

Hosts: Key company executives opened or closed the showcase, stressing the ability of their magazines and Web work, viewed by 72 percent of all Millennial women and two out of three Latino females. "[They] trust our brands because of their authenticity ... each and every day," noted Jon Werther (pictured on stage below), President of Meredith's National Media Group. "We hold ourselves accountable to our customers [and] we also hold ourselves accountable to our advertisers." 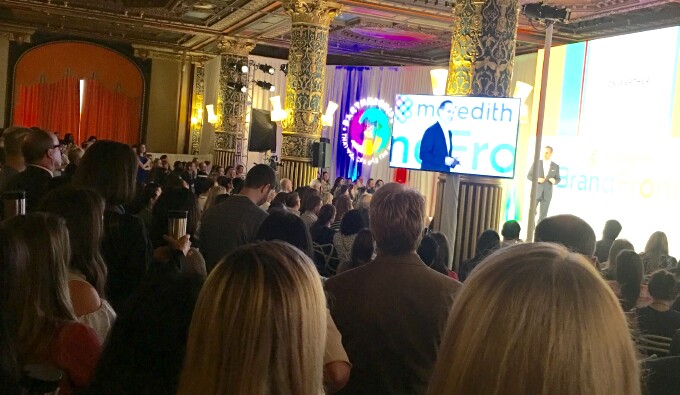 Picking up on that statement during his closing remarks, Digital Sales Senior Vice President Marc Rothschild affirmed that every initiative on display will go on in 2017, not following the mantra of some Digital Content NewFront players who tout "sizzle with no steak." Grade: 3 Jacks

Star Time: Rachael Ray (pictured at top right with Lauren Purcell, Editor-in-Chief of Rachael Ray Every Day) had a hoot of a time with the crowd, describing her career trajectory and upcoming work with "Give" player Feed It Forward. Best moment nominee: how "Yum-O" became her trademark TV phrase. Martha Stewart contributed remarks on tape from Los Angeles, where she's working on her upcoming Dinner Party series with Snoop Dogg. Grade: 3 Jacks

Cuisine: A mix of treats and drinks, each inspired by a Meredith publication. My faves: country ham biscuits, chicken tidbits on waffles with maple flavor, and fruit smoothie sips. (Note: Food ratings do not impact the overall Jacks score.) Grade: 3.5 Jacks

Overall Grade: 4 Jacks  A different course from the majority of Upfronts/Newfronts. Here's a print-focused company diving into cause-centric initiatives in a big way. What's more, these are multi-platform and multi-angle initiatives that emphasize lifestyle advocacy and empowerment among women. A ton of information was dished out in a bright, non-sugary manner that avoided leaving guests overloaded.

Let's see if this leads to a movement among next year's Upfront/NewFront participants to highlight at least one outreach effort in their respective showcases.

Notes from the Passing Parade

One more post-Meredith observation: With so many ventures formed in recent months to develop scripted TV series among women and women of color, how about "Lead" expending some focus on development of new unscripted TV series among those groups? Seems like a natural outlet for this. Oh, and if you're in Brooklyn this Saturday, learn about the latest scripted TV for women project, Presenting Women, at IFP Film Week, courtesy of former Charmed co-star turned TV developer Rose McGowan.

Horrendous absence of Apple TV from Apple's latest showcase in San Francisco last Wednesday, led by CEO Tim Cook. Nearly an hour on the new iPhone 7, almost a half-hour on Apple Watch, and at least 10 minutes for Apple Music. Yet not one solitary word on Apple TV, despite the fact that the same event last September was highlighted by Cook declaring "the future of TV is apps." One year later, Apple TV has more than 6,000 apps, the ability to offer unique services including AirBnB, Zillow, Redbooth and now Papa John's (interactive pizza ordering and delivery), and at least one feature running virtual reality content through the TV set (Littlstar). Word to Apple executives, especially Cook and Eddy Cue, the man in charge of Apple TV:  This product is no longer a hobby or an afterthought. Millions of people are using this device. It’s time to talk more about the apps that bring TV's future into view right now.