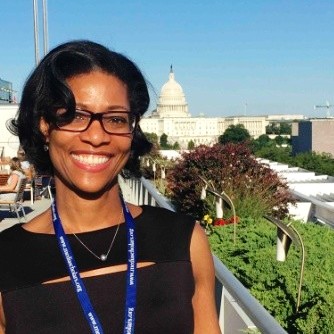 "Total political-ad spending in the 2020 elections on broadcast could top $3.5 billion, up 11 percent from 2016," according to CNBC. This could set a new record. And Politico projects overall spending in the 2019–2020 election cycle to reach $6 billion (with $4.4 billion on broadcast television, cable, and radio and $1.6 billion on digital video), for an estimated 57 percent growth from 2018. How effecting will that spending be?

As vice president and director of political sales at CoxReps, Mica Hansen (pictured at top) has extensive knowledge of what makes a political campaign work. In this interview, Hansen discusses the current state of political advertising and what makes for a strong (and weak) ad. She also examines the relative differences between digital and television political advertising, particularly insofar as each has been dominated by the Trump and Bloomberg campaigns, respectively.

Erich Prince: When it comes to classic political ads, a couple come to mind: the 1964 "Daisy" ad by the Johnson campaign and the 1984 ad during Mitch McConnell's first Senate race with bloodhounds searching for McConnell's opponent, Dee Huddleston. What ads stand out for you?

Mica Hansen: I'd certainly agree with you on those first two. One of the [ads] that recently caught my eye was [Senator] Joni Ernst and her initial spot [where she described her experience "castrating hogs"]. I thought that one was certainly eye-catching. It catapulted her name out there in a way that it would've been difficult to do otherwise. No one knew who she was — and, then, everyone knew who she was.

Prince: What are the features that make for a good political ad?

Hansen: I think that's changing. A few years ago, I would have said a compelling storyline — much like Barack Obama's initial biographical spots. They were spots that were introducing the candidate to the electorate. Now, to the point of the Joni Ernst spots, it tends to be something that's either a little more controversial, or comes with humor, or has something that makes it stand out from the generic. We're seeing an uptick in military service features, as quite a few veterans are now running for office and that will often be a key component of their pitch.

Prince: Conversely, what makes for a bad political ad?

Hansen: Goodness, there are so many. There's the generic: flags, apple pie, the shot of the family with the puppy — so often a golden retriever. Or, "I'm a successful businessperson; this is why I can run the government."

Now, granted, that worked very, very well at the presidential level. Obviously, I'm speaking of Trump — and Bloomberg to a certain extent. But at the local level, I think people are looking for something more enticing than just, "I've made a lot of money in business, so I'm going now to bring that to the state."

We've seen differences, though, depending on if a candidate is self-funding. So, I should put that caveat in there. If you've got enough money to put behind your message, generally that tends to make up for any number of copy errors you may commit along the way.

Prince: As Mitch McConnell says in his memoir, The Long Game, "The three most important words in politics are 'cash on hand.'"

Prince: You mentioned Mike Bloomberg. What ad strategy being practiced among the 2020 Democratic candidates — by Bloomberg or others — stands out most as noteworthy or interesting?

Hansen: I would have actually said Bloomberg. Now, granted, it is a strategy that could only be pursued by someone who had this amount of "cash on hand" — to steal from the previous line. It's not something that can be done otherwise, but he has frequent copy changes and engaging copy. I've noticed a narrative coming through beyond just trolling President Trump.

For example, I was watching a spot and he's been using the tagline, "Mike Will Get It Done." In this most recent spot, he said, "Well what is 'It'"? And he talked about what his "It" was, which was changing the tax structure, increasing funding for social programs, giving everyone health coverage, etc. But he actually took the time to define "It." Then, there's the sheer amount of spending. At this point, Bloomberg and Steyer have combined for $445.9 million in spending, more than all other candidates combined.

Prince: An important conversation that has been ongoing is television versus digital ad spending. How are you seeing the breakdown between the two this cycle?

Hansen: Bloomberg is challenging where the trend line had been by running so many television ads. As of the week of February 10th, Michael Bloomberg has spent approximately $300 million on advertising, with approximately 79 percent of that on local broadcast or network television. He's doing digital too, of course.

But one of the things that was true about the Trump campaign, which kind of up-ended the way campaigns were being planned at the time, is that it was digital-forward. It was substantially spending on digital — Facebook, specifically. As you know, Brad Parscale, his current campaign manager, worked as his digital manager previously and they invested heavily in digital. And it worked well. So far, the Trump campaign has spent approximately $52.1 million this cycle, with about $39 million on digital.

Prince: Can you describe the current intersection of political ad spending and the broader financial well-being of the various local news markets?

Hansen: There has been a contraction that is obvious and documented. I'm not letting [the] cat out of the bag to say that there's been a contraction in broadcast spending overall over the last few years. Yet, political [ad spending] has somewhat papered over — if not made up for — some of the declines that we've seen in core spending going into broadcast. And I can see that continuing, especially since Bloomberg's campaign is investing so much in broadcast.

Of course, this all depends on who wins. If Trump continues with the digital-first strategy and is able to win reelection, I'm sure we'll see more candidates continue that pivot to digital. But if a more general market and broadcast strategy wins the day, then I would say the advantage is to broadcast.

To invoke an extremely old trope: Broadcast is the shotgun, digital is the rifle, and you're going to hit an individual person, whereas television hits everybody. And then it just depends on who's listening to your message at that moment. I know there is still targeting involved, and I don't want to act like broadcast isn't targeted — because it is — just not to the degree of digital. But since you are trying to get a preponderance of voters out there to vote for you, you need to reach that level of audience, for which broadcast has not been surpassed.