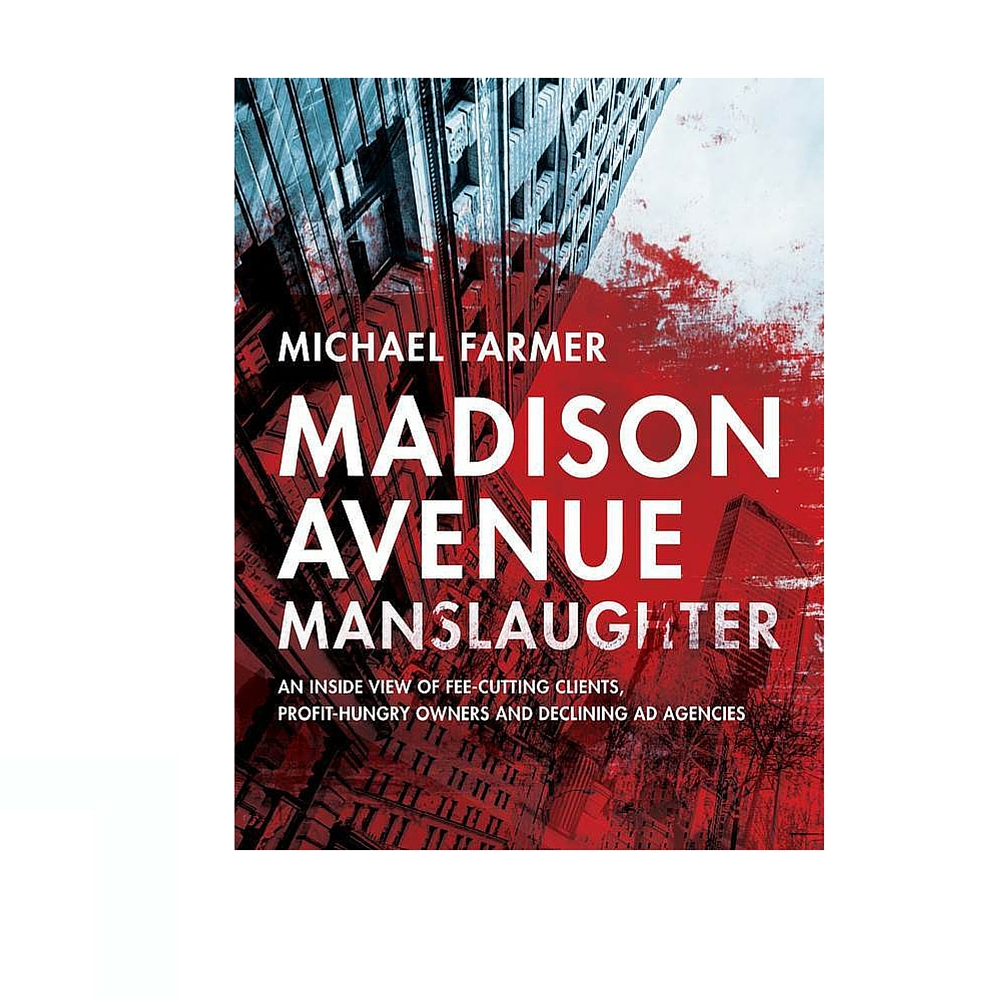 Yes, the pages are splattered with “blood” (but using black ink, not red), and the title is startling enough that it may take some readers a day or two to muster the courage to open it. But the industry-shaking insights in Madison Avenue Manslaughter make it required reading for everyone who works in advertising -- marketers and agencies alike.

With a first-class pedigree and years of practical experience in the trenches of the business, author Michael Farmer builds a convincing case for why advertising agencies must make a radical change in the way they manage their businesses. He first paints a historical backdrop going back to the early economic roots of the industry, showing step by step how agencies -- once mega-profitable enterprises basking in the glow of advertising’s “golden age” -- are now fighting for their financial survival, whether they admit it or not.

Farmer shows how the current practice of large marketers buying an agency “staffing plan” (a team of people or chunks of their time) -- instead of a clearly defined set of outputs and outcomes -- makes it almost impossible for agencies to allocate and deploy the resources effectively and profitably. Actually, Farmer’s larger point is that even if agencies had a better view of their actual workloads, they generally lack the tools, discipline and practices to effectively match and manage their talent pool to the work.  A century of laid-back management practices, meant to create and cultivate the storied “creative” environment, have resulted in an industry that today generally lacks the technology, workflow management systems, project management practices and the sheer will to create and sustain a culture of accountability.

A former management consultant himself, Mike Farmer offers one of the clearest explanations of why and how the management consultancies stole the strategic high ground from agencies.  The booming post-war decades of the 1950s-60s were perfectly suited for enterprises like agencies that were working directly alongside the chieftains of business, helping to create and build mass markets for goods and services. But the late 1980s ushered in the imperative of “shareholder value” in boardrooms across the globe, and CEOs turned their attention to initiatives designed to improve efficiencies and cut costs, giving rise to today’s version of procurement professionals, and explaining in large part why finance gained C-suite influence at the expense of marketing, which CEOs increasingly came to view as an expense instead of an investment.

Ill-suited to counsel CEOs in concrete ways to create “shareholder value,” agency leaders began to lose their access to the highest levels of their client companies and were relegated to instead deal almost exclusively with an increasing demoted marketing team.  Enter the management consultants, who not only helped CEOs engineer new business-building initiatives, but also helped procurement pioneer new cost-cutting initiatives as well.

This context is important, Farmer argues, because it explains the state of the advertising business in 2015. Compared to years past, agencies are much more factories than gardens, largely responding to client requests and fulfilling orders on flow charts instead of helping to guide the marketing program in the classical sense (as in all the “4 Ps” of marketing). Pushed down the value chain and beat down by procurement departments, agencies continued to react to buyer demands to provide their services and competencies in a commoditized way: bundle them up as “inputs” of roughly equal value based on the sub-optimal concept of hourly rates (which were then compared against somewhat suspect “industry” salary and overhead benchmark data).  Using this system that agencies themselves unwittingly created, procurement negotiates rates and staffing plans, largely independent of the actual Scopes of Work that are assigned by marketing.  As a result, agencies make resource commitments to clients without a clear view of the actual workload, then execute the workload without the benefit of the sophisticated tools, technology and workflow management techniques employed by other more buttoned-up industries. This is, Farmer says, a recipe for disaster, and a disaster it has become.

Each chapter heaps fuel onto the argument that the current ways agencies and clients work together is economically unsustainable, and both parties -- including the big agency holding companies -- know it. The publicly traded agency groups have been able to turn in acceptable margins only by cutting costs in unsustainable ways -- reducing head counts, slashing training budgets, trading out experienced senior talent for juniors, and generally doing more for less, resulting in an exodus of overworked ad people who are headed for the greener salaries of marketing technology.

The remedies prescribed for this situation amount to some tough medicine.  But for this, you'll need to peruse Madison Avenue Manslaughter yourself, blood-stained pages and all.