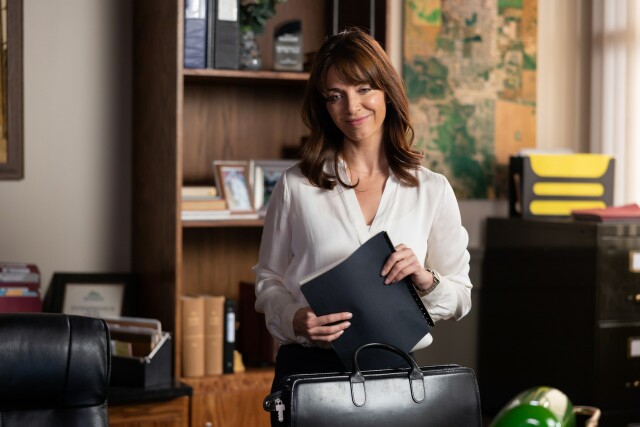 Beloved Canadian series Heartland this week is returning to streaming service UP Faith & Family for its 15th season. Now one of the longest-running scripted dramas in its native country, and based on the book series by Lauren Brooke, the series follows the adventures of sisters Amy and Louise "Lou" Fleming on their Albertan-based family ranch. Throughout its run characters have come and gone, but series leads Amber Marshall (Amy) and Michelle Morgan (Lou) have remained constants. For Morgan, joining the series in 2007 was something she wanted, yet never envisioned as a major part of her life. "I definitely remember auditioning for it because I remember really resonating with the character of Lou," she shared in an exclusive MediaVillage interview. "Sometimes you audition, and hope you've done the best you can. But I immediately read it and I felt, 'Oh, I know who this is, and I know how she feels because I was at a similar place in my life as her.'

"I’d just finished university," she continued. "I had a big family. I knew what [those] family dynamics were like, and how that kind of family dynamic was at times -- complicated. I just knew this character. When I finished the audition, I felt really good about it but didn't think I would necessarily get it. As an actor, you can do the best performance and they might say, 'We need someone two inches shorter,' so I didn't think I’d gotten it. But I had no doubt I suited the character."

Morgan was indeed right for the character of Lou. She recalls being "thrilled" when she got the call saying the part was hers. "Every time an actor gets a part, it's a big deal," she said. "You spend most of [your] lives auditioning. That's most of an actor's career -- just trying to get work."

Fifteen years later, Morgan is very aware of the opportunities that Heartland has afforded her. "I'm so spoiled, so spoiled," she laughed. "Especially in Canada, as we have a very small film industry. The population is also small and few actors in Canada can live off just acting. To have a steady gig for 15 years … I have no illusions about what a blessing that is.

"And it's still really exciting," she continued. "It was not what I expected going into this job at all. I thought it might go three or four seasons, like most shows, but it's become such a part of my life that I hope it keeps going and going as the cast is my second family. I assume every season might be the last one, but we fill a void on television that has been needing to be filled. There are a lot of families who appreciate the show and what we offer. I appreciate that they can watch it together, and in that sense, there’s nothing else on TV like it."

Morgan’s affinity for her character has grown throughout Lou’s journey. "She’s been a great character to play because she's intelligent, outspoken and opinionated," she reflected. "She's also strong and that is fun! She’s similar to me in those respects, so that's always been great to play. I think she's become more like me as actors usually bring themselves to their roles. It's also been nice over the years to see Lou, I don't want to say 'soften,' because she's still always tough, but she has softened a little. Amy and Lou have become closer, so there are some great Amy and Lou storylines as we were kind of antagonistic the first few seasons. It's nice we've evolved past that."

When it comes to season 15, Morgan is careful not to overshare. As an occasional director on the series, she’s often privy to advance scripts, making her the go-to cast member for upcoming storylines. However, she’s happy to give fans a tease of what to expect in the weeks ahead. "There’s a lot of comedy between Lou and her new assistant Rick (Aiden Moreno), who is a very funny actor," she revealed. "There’s some great drama, and I directed episode 7 (Bluebird) with an amazing Amy storyline about getting past Ty (Graham Wardle) and grieving him. And I can tease there's finally a conclusion of sorts with Lou’s love life that I think most fans will be happy to see."

Morgan believes "family" is why Heartland has endured and continues to resonate with fans. "It’s designed for the whole family and really is a multi-generational show," she explained. "It's not just for kids, not just for grandma and grandpa, not just for the parents. It's designed for everyone to enjoy and that is unique. People have really [connected] with our cast and the core family. They enjoy being part of our lives in a way, and then, of course, the other element is the scenery and the setting and just how magical southern Alberta is.

"I think that’s what makes UP Faith & Family such a great home for the show," she added in closing. "[They] have been just wonderful to us and have created really beautiful content online and on their channel. They cut really wonderful teasers of each episode, [maybe] even better than the CBC ones in Canada. They've done great things for us and we're so happy to call them home in the United States."

Season 15 of Heartland begins streaming March 17 on UP Faith & Family.