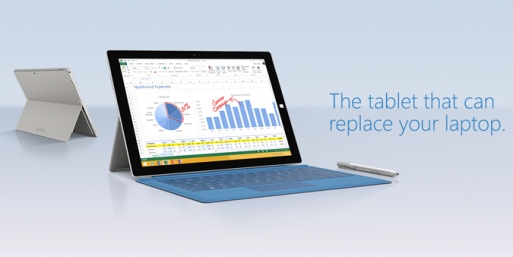 Will Microsoft's Surface Pro 3 replace your laptop? That's the million dollar question. Microsoft says it absolutely can – and they're right.

If you really want to replace a laptop, you're looking at any of the four best models (which start at $999). At these levels, the insides of the Surface Pro 3 are essentially the same as what's inside a MacBook Air. For all practical purposes, the Surface Pro 3 is simply a laptop with a detachable keyboard.

For $129.95, the optional plastic keyboard has a touchpad that's pretty tactile and keys that actually click. This is a keyboard you can really touch-type on as opposed to the horrible plastic mess that Microsoft rolled out with the first generation Surface tablets.

For Windows users the Surface Pro 3 has only one important feature -- it will run 100 percent of your Windows programs. Specifically, it will run 100 percent pure Microsoft Office. Where does this matter? Anywhere you need keyboard shortcuts such as Excel power users. If you use extensive Excel keyboard shortcuts, you know that the version of Excel that runs on OS X is useless. If you own a MacBook Air and you run Windows over Parallels, you know that MacBook Air keyboard does not allow most power Excel keyboard shortcuts – Mac keyboards simply don't offer the key combinations. The same is true for the glass keyboards on iOS and Android devices. However, the Surface Pro 3 is a 100 percent Windows machine and when you run Excel you will be in keyboard shortcut, power user heaven.

Of course, the Surface Pro 3 also runs everything else you can run on a Wintel machine including the full Office Suite, Adobe Creative Suite and even Pro Tools (digital audio workstation) and Avid (digital video workstation) software. I loaded up my demo unit with all kinds of random Windows programs and they all ran perfectly.

Microsoft is quite excited about the hinge on the back of the Surface. When the product manager demonstrated the device to me, he spent about 10 minutes raving about the hinge – it's got a sort of "infinite flexibility." With it, you can turn the device upside down, you can stand it up… you can prop it just about any way you can think of... who could ask for more. 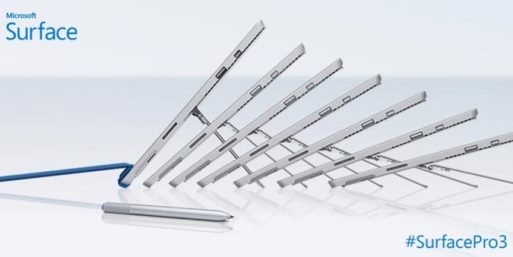 One of the true hero features of the Surface Pro 3 is the "pen." It's far more than just a stylus. The pen has two buttons: an eraser and a selector. When you click the top of the pen, you immediately get into Microsoft OneNote – even if the device is locked. The pen is particularly excellent and it transforms OneNote into something special. If OneNote is a tool you like to use, you are really going to love the way it's integrated into the Surface Pro 3. 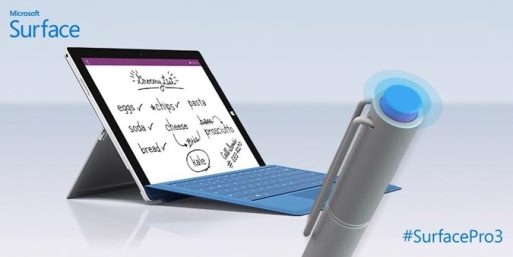 Tablets require touchscreen interfaces. Laptops require keyboard interfaces. The Surface Pro 3 offers both. You may have heard that Windows 8 sucks. I've heard that too (and said it a few times). Windows 8.1 sucks less. Would I like if it could be set to default to a Windows 7ish home screen devoid of the seemingly useless tile icons? Perhaps. But after using it for a while, you will come to appreciate how much care and thought went into the new interface and, as soon as you start mixing keyboard, touchpad and touchscreen user interface behaviors, you're going to understand why there is no reason in the world to look backwards. Windows 8.1 may not be what you think you want in an operating system – but it's an important step towards a touch-sensitive future.

Who is the Surface Pro 3 for?

Students and professionals who really want to have the best of both worlds will really like the Surface Pro 3. If you like using a tablet for reading and Skype and browsing the Internet, but also need to really get work done, as Microsoft boasts, "This is the tablet that will replace your laptop."

If I were buying one, I would only consider the i7 with 512 GB of storage for $1,949 because you will really need the storage and you can never have too much processing power. While $2,250 (including keyboard and tax) is really expensive, it is about as future-proof as you can make this purchase. Literally every other model will be obsolete the moment you get it home. 256 GB simply is not enough local storage for anyone. BTW, I would not purchase a MacBook Air with anything less than an i7 processor and 512 GB storage either. There's no point.

This is the tablet everyone wanted before Apple invented iPads. It's a "real" computer in a tablet form. It has a USB port, it has a stylus, it's powerful, it can run "real" software. The problem Microsoft is going to have is that iPads have been invented and consumers have voted with their checkbooks. Hundreds of millions of iPad users have been trained to use apps instead of software. They are happy with single purpose, easy to use, colorful tools that do simple things. Do you really want a full version of Microsoft Office on your tablet? Are you going to like the full version of Adobe Illustrator on a 12" touchscreen? Will the plastic keyboard comfortably replace your laptop keyboard? I say yes. But it's not up to me... it's up to you.