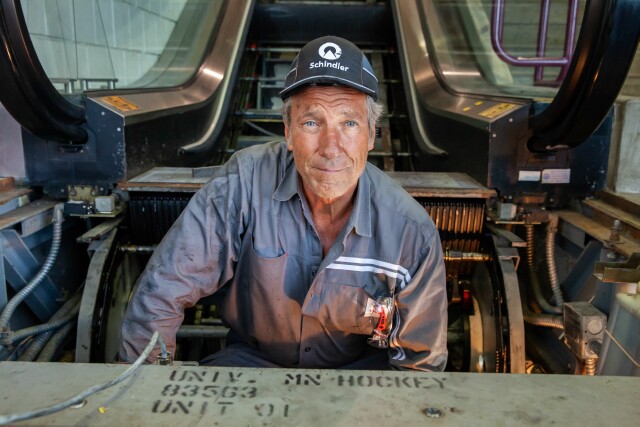 Mike Rowe ambles into an upscale restaurant in midtown Manhattan. It takes a moment to place him from Discovery's Dirty Jobs, now in its ninth season. The surprise isn't that he cleans up well; it's how spiffy he looks in a sweater and slacks as opposed to the sweat-streaked mess he is on the show.

Rowe's never encountered a job that requires physical labor, true grit and mechanical skill that he looks down on. He's a man on a mission, reminding us that people who know how to work with their hands built this country and keep it running. He shows his respect for laborers by highlighting their work on the show, and trying to do what they do, explaining how hard -- and necessary – their jobs are. And, he's encouraging youth to go into the trades through his mikeroweWORKSfoundation.

All this stems from his lifelong desire to be like his grandfather. "He was an electrician, and a plumber and a steamfitter and a pipe fitter and a mechanic and a welder and an architect -- and a guy who went to the seventh grade," Rowe said. "And he could build houses. He could take your watch apart and put it back together blindfolded. He just had that mechanical knack. I was pretty sure I was going to follow in his footsteps because I wanted to. I just didn't get the skills. The handy gene is recessive, right? I didn't know that.

"So, he told me when I was probably 15, 'Mike, you can be a tradesman, if you want, just get a different toolbox, because none of this stuff is coming easily for you'," he recalled.

Growing up outside of Baltimore, Rowe was a shy kid with a stammer. In the Boy Scouts, he read to blind people, everything from newspapers to Dr. Zhivago, "whatever they wanted to hear." That helped his stutter to a degree. But Rowe credits his high school music teacher for stopping his stutter. The teacher, a retired Army colonel, asked him to audition for a school play. Granted, the way the teacher approached this would not fly today.

"I did it because I loved him, and I trusted him, and I went on stage," Rowe said. "I started stammering through a monologue, and I got about 20 seconds into it, and he said, 'Mike, stop. I love what you're doing with the character, but this character doesn't stutter. You do that on your own time. Just try it once without the whole Porky Pig routine.'

"I wish teachers could be less careful today with their kids," he continued. "But look, there was a lot of trust between us. I didn't think about how glib it was."

And so, Rowe became comfortable speaking in front of others and putting his rich voice to work. He sang professionally with the Baltimore Opera, and this Christmas had a song, "Santa's Gotta Dirty Job," with John Rich that reached No. 1 on iTunes.

Before he had his own shows, Rowe was working in San Francisco at CBS, "impersonating a show host." On Evening Magazine, he wound up shooting the first segments of what would become his trademark – telling viewers about an unseen dirty job.

"I took my cameraman into the sewers of San Francisco to host the show from a sewer," Rowe said. "The roaches, the rats, the excrement. It was horrible, and there was a guy down there, knocking the bricks out of the wall and replacing them."

A star, one destined to be coated in very nasty stuff, was born.

"It was a segment originally called Somebody's Gotta Do It," Rowe explained. That eventually morphed into Dirty Jobs beginning in 2003 on Discovery. All along, ideas of what fields to feature came from people telling him about their work or their relatives' jobs. And then, of course, I said, 'Well, okay, what do they do?' And then we started to get these elaborate descriptions of these really odd jobs.

"You know, it's very rare for a show to inspire that level of interaction with fans," he noted.

Rowe loves the odd jobs, the jobs no one even thinks about but which make the world run.

"Season one was feces from every species," he said, laughing. "We were just absolutely focused on all the different kinds of shit and all the different ways to clean it up. Season two, we kind of stumbled into this weird world of artificial insemination. And once the network saw me coaxing the sperm out of a bull, they were horrified because standards and practices was like, 'We don't even know what to blur and what to look away from.' But the ratings went through the roof."

This season kicked off with a very tough dirty job, where the result is intentionally unseen. Rod busters install reinforcing steel in massive structures that other layers of construction hide. By the next episode, Rowe added a layer of epoxy to a restaurant floor, which, like all these dirty jobs sounds far more pleasant than it is.

"The guys who do it are truly a band of brothers," Rowe said of his adventures in Florida, building a bridge and carrying heavy steel rods in the sweltering heat. "These guys will come in, and they'll bend the rebar, and they'll shape it, and they'll tie it, and they'll construct this elaborate skeleton.

"It's beautiful, and it weighs many tons, and it's just this giant thing," Rowe continued, genuinely impressed. "And then the cement guys come in. There was something about the combination of art in the work, pride in the art and the invisibility of it all, that just made me think, 'Man, somebody's got to spend some time with these guys.'"