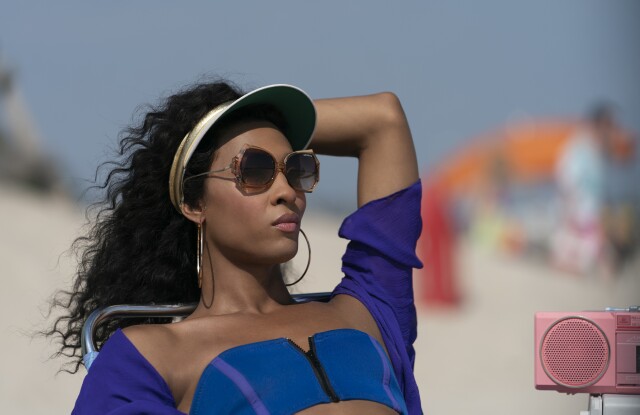 There’s “glamorous” as in Elizabeth Taylor and Princess Di, women who were always camera-perfect and beautiful.  Then there’s “The Glamorous,” reserved for the sort of woman who looks as if she woke up with eyelashes adhered, hair just styled, lipstick glossy and rocking outfits mere mortals can’t even figure out how to shimmy into.  Mj Rodriguez is one of the latter.  Sporting a blunt, swingy bob and wearing a little black mini dress with sheer sleeves, the trans star of FX’s Pose set aside time during the recent Television Critics Association tour to chat with MediaVillage about growing up in Newark, the growth of her character Blanca and all the good things Pose has brought her way, including working with idols Patti LuPone and Billy Porter.

“Blanca has had to evolve in many ways,” Rodriguez said as she settled into a couch at the Beverly Hilton, ready to chat about her breakout role in one of FX’s many breakout shows.  “In the first season she was focused on leading a house of her own [as mother to many disenfranchised young adults].  In season two she is figuring out how to navigate the ways of the world [after her “children” all leave home].”

From day one, working opposite Billy Porter (pictured below left), who is currently an Emmy nominee for his blistering portrayal of vogue ball M.C. and Blanca’s best friend Pray Tell, has been a dream come true for Rodriguez.  Season two has taken her good fortune a step farther with the addition to the cast of guest star Patti LuPone, playing a monstrous multi-millionaire with whom Blanca becomes entagled. 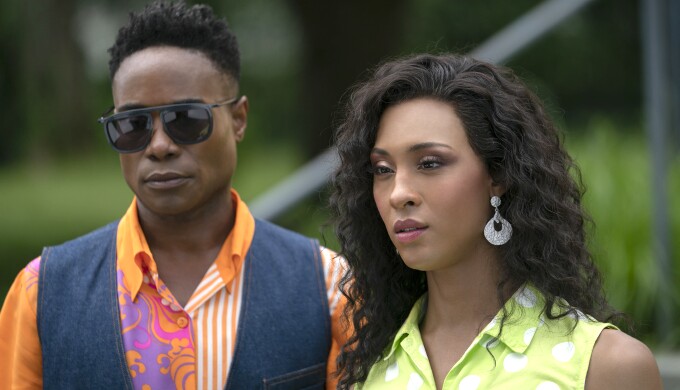 Rodriguez said LuPone “was quite splendiferous.  It was amazing.  Seeing her play a character, a wonderful villainous one, and knowing she is completely the opposite” was, she added, a “highlight” of her career to date.  LuPone, who has left audiences cheering until they were hoarse and has famously disarmed rude theatergoers, knows a thing or two about holding her own, and shared such knowledge with her co-star.

“[Patti taught me] that it’s important to know your self worth as a woman,” Rodriguez said.  “She is a force of nature.  She makes sure she delivers every single time.  She is amazing.  I would just stare at her during filming.”

And what about working with another diva who knows how to make a better entrance on red carpets than anyone?

“I have known Billy since I was 19,” Rodriguez said as she started to cry.  Clearly their real-life bond runs deep.  Reminded that she is in full makeup and about to take the stage in 20 minutes in front of the Television Critics Association, she inhaled deeply, then exhaled, fully comported.

At 28, Rodriguez is in a wonderful place.  This week she was named Best Actress, Television at the Imagen Awards, the first transgender actress to receive the award honoring positive representations of Latinx in the media.  Deeply aware of blazing her own fabulous trail, she said in her acceptance speech (as reported by the Advocate):  “It’s so crazy to be standing here because you’d never think in a million years that you’d get an award like this, being a woman like me. … This is for the little kids like me.”

Rodriguez isn’t just tossing out sound bites.  She lives with her mom, Audrey, in Newark, where she learned her craft at the New Jersey Performing Arts Center.  At 19, she played Angel in the 2011 Off-Broadway revival of Rent.  That role led to more work on stage, parts in films including The Big Take and several gigs on television, among them Nurse Jackie and The Carrie Diaries.

But it was on Ryan Murphy and Steven Canals’ groundbreakingPose,featuring the largest transgender cast ever assembled in series regular roles, that Rodriguez shot to fame.  Brilliantly written, directed and acted, the second season is set just before Rodriguez was born – a terrible time when AIDS was ravaging a generation of gay men.  The storylines don’t shy away from the horrors of the day.  Indeed, several characters, including Blanca, have learned they are HIV+ and they are doing whatever they can with the limited medical resources of the time to survive and thrive. Homophobia and transphobia are also an everyday part of the characters’ world.

WhilePosedoesn’t shy away from the darkness of those days, it also revels in the glitzy competitions of the ball culture, where posing and vamping were on the DL to the general public, at least until Madonna put the spotlight on them with her iconic song and music video, the game-changing Vogue.  Throughout, for the people who lived in that world it was their own unique universe where they could be loved, appreciated and, most important, be accepted for who they were.

Although Blanca’s illness was considered at the time to be a death sentence, Rodriguez has given much thought to the medical advances since the ‘80s and ‘90s -- drug cocktails saving so many lives – and come to the conclusion that Blanca could survive for several more seasons.

This drama has given so much to so many, but what it gave Rodriguez may be the most vital gift of all.  “It gave me hope in ways I thought would not be possible,” she acknowledged.  Outside of the series, she added, “My focus is on focus.  I am trying to stay out there and see if I can get a role in a Marvel movie.  I want it so bad.”

A lifelong comic book fan, Rodriguez knows she would rock one of those costumes. “Spandex is my friend,” she said, flashing a grin.

There’s more proof that Rodriguez is one of The Glamorous.  Most women cringe at the mention of Spandex.  Rodriguez, though, knows she was born to play a superhero.  In some ways she is already doing exactly that.