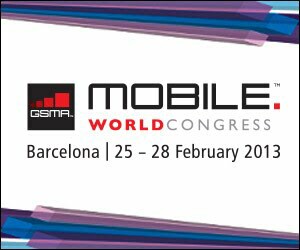 A record 80,000 people, including over 5,000 CEOs and government officials from more than 40 countries, attended the Mobile World Congress in Barcelona last week. The event featured hardware and software companies, established players along with disruptors, start-ups and much more. It is the most comprehensive event of its kind.

The global mobile industry continues to invest in growth and will require investments of around 1.7 trillion over the next five years to ensure a robust mobile broadband network. Here are some of the milestones for 2013.

· Smartphone sales globally outstripped non-smartphones for the first time in 2013.

Predictions for the Future: Connecting Everyone, Everything, Everywhere

IBM : Virginia Rometty, CEO of IBM, said, "I think this is both an exciting time but also a disruptive time for everyone in industry." Rometty cited three historic shifts that will have important implications for the mobile sector: Data, cloud, and engagement.

Data is now "the world’s new natural resource" and will become a key competitive advantage for every industry. Cloud computing will change how services are delivered. Engagement via personalization to meet customers' expectations — with analytics playing a major role.

Cisco : John Chambers, Chairman and CEO of Cisco, added that the companies that will win in the multiscreen home will be able to connect devices and services together effectively: “If you don't play architecturally across the home, then you get left behind. . . . I really think it’s going to be about the battle for the Internet of everything.”

Here are a few examples of disruptive innovators impacting the mobile industry.

WhatsApp sent shockwaves through the mobile industry by announcing it will soon launch a voice service in addition to its widely used messaging application. Speaking at Mobile World Congress, Jan Koum, the Internet player’s chief executive, said WhatsApp plans to introduce the voice service in the second quarter of the year, and will initially cater to Android devices and iPhones before turning its attention to Windows and Nokia handsets. “We think we’ll have the best voice product out there,” said Koum. “It’ll use the least amount of bandwidth and we’re going to optimize the hell out of it.” WhatsApp has already shaken up the mobile industry with its free messaging application, currently used by some 450 million subscribers worldwide, and its latest move will pose a threat to operators that still generate most of their revenues from providing traditional voice services.

Shazam is developing new tools for the TV industry based on its music identification app that is now installed on more than 400 million devices. CEO Rich Riley described how, by continuously ingesting 160 live TV channels in the U.S., they provide a platform that can be used by TV networks and producers to drive

ratings before shows, providing additional content during transmission, and gather rich audience data for analysis post-show. Is Nielsen at risk?

Facebook could become the largest connectivity company in the world by folding WhatsApp into the Facebook platform. Facebook is also backing Internet.org -- an industry initiative to make online connectivity affordable in emerging markets -- and is ready to work with national governments to promote Internet access.

Fordunveiled a research car that will be used to develop advanced and, eventually, fully-automated driving technologies. The vehicle will support Ford’s Blueprint for Mobility program that is researching transportation requirements for 2025 and beyond and seeking to identify the technologies, business models and partnerships that will be needed. The automated research car employs four LiDAR (Light Detection and Ranging) sensors that scan the surrounding environment by bouncing infrared light off everything within roughly 70 meters.

Mobile video usage is accounting for more than half (and in some cases, over three quarters) of network usage. Mobile video has taken our networks and lives by storm. Netflix, YouTube, Facebook, Twitter, Vine and Instagram are just a few of the services that have become everyday occurrences in our mobile lives. Video is the fastest growing service in mobile, but this unexpected success brings new challenges to mobile networks. Network operators will need to start separating video from the rest of the data traffic and charge it in a manner that is easy to understand. Research has demonstrated that most subscribers would prefer buying video minutes, rather than megabytes, as it would make their bill much easier to understand. Separating video from generic data traffic is the beginning of the path towards mobile video monetization.

Meeting the indoor mobile challenge. The growth in mobile data continues to break all records, driven by the demand for always on Internet access in offices and homes, as well as across public environments from train and bus stations and airports, to hotels, campuses and entertainment venues. With close to 80% of mobile data traffic already consumed indoors (according to Cisco), it is clear that higher capacity and more efficient data communications are required to support in-building networks for the future.

Over the next 30 years, the global population will see the conclusion of a seismic demographic shift. During the last ten years, most developed countries have seen the number of people living to the age of 100 increase by 100% or more. People are living longer. This will have an impact on all of society. For the mobile industry, it offers opportunities and threats. One of the opportunities is the delivery of self-service healthcare through mobile. One of the threats is that, as people age, their manual dexterity and mobility naturally diminishes. People do not wake up one day to find they are old. The process is gradual. But it has a profound impact. Design will be integral to success.

As smartphones and LTE networks become widespread, mobile network operators are under pressure to accommodate the explosive growth of data traffic while delivering differentiated mobile services to their customers. There is discussion of several innovative technologies including software-based mobile networks to help manage this explosive growth.

Dan Hodges is Managing Director of Consumers in Motion , a boutique consulting firm that offers a

team of industry experts with global experience who consult, build and operate an enterprise from beginning to end. Dan can be reached at Dan@consumersinmotion.com