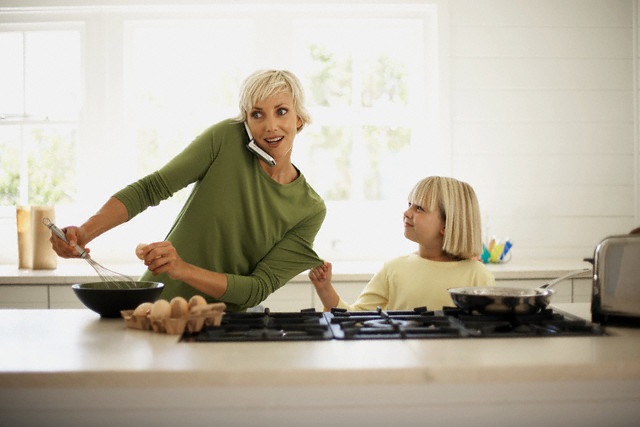 Inspired by Jack Myers' new book, The Future of Men: Masculinity in the Twenty-First Century (out now!), this is a weekly blog focused on all things gender. This week, Organic Balance tackles women’s everyday morning struggles, The Guardian stands up for online harassment and Chariot for Women launches as the world’s first female-only car service.

A new Organic Balance ad for a breakfast protein shake takes on the reality of a professional woman’s morning -- spoofing the idealized moments of yoga, reading time and self-reflection often seen in commercials. Instead, it’s “a real-talk counterpoint to most advertising aimed at women,” reports Fast Company, showing women grumpily rolling out of bed, struggling to get dressed and make breakfast, swearing, using dry shampoo and leaving their bed unmade as they run out the door. Organic Balance partnered with SoundView Research to survey 1,000 women on what their mornings are really like, stating and staging the results in the campaign. 79% of women admit to eating breakfast on their way into work, 39% will re-wear dirty laundry this month and 33% will never make their bed. While other advertising may paint an idealized version of your day, the ad states, only 15% percent of women would describe their morning with the hashtag #blessed. Watch the hilarious ad below.

The Guardian Takes on the “Dark Side” of Their User Comments

At one time or another, and perhaps too often, we’ve all groaned at vile user comments posted on an article or a publication’s Facebook post.  In a stand against online harassment, the Guardian commissioned a research study of the 70 million comments left on their site since 2006 and found some perhaps not-so-surprising results: The first quantitative evidence that articles written by female journalists attract more abuse and trigger more trolling than those written by men. Of the ten most abused writers on their site, eight were women (four white and four non-white) and the remaining two were black men.  On the flip side, the 10 journalists who received the least abuse were all men.  In addition, articles written by women had a consistently higher portion of “blocked” comments across all sections, meaning those comments violated Guardian community standards and were removed.  In their report of this study, the company admits that it has thought of disabling the comment sections to deter abusive commenters, but decided against it because of the positive discussion that can arise from comment forums. Instead, they have decided to elevate the voices of those writers who have been subjected to hateful user interactions. You can check out their stories here.

Paying Men and Women Equally Could Add $4.3 Trillion to US Economy

In honor of Equal Pay Day, which was this past Tuesday, the McKinsey Global Institute released a report detailing the economic impact of balancing gender ratios and pay across all sectors, Mic reports. The findings are shocking, presenting a strong case for paying women more and equally splitting domestic duties in the home.  According to the study, if women are awarded equal pay, hours and positions, the US will add an extra $4.3 trillion to the GDP by 2025. However, this is unlikely to happen in the next 10 years due to the slow rate of social change. For example, women still do the majority of unpaid housework and childcare, which contributes to keeping them out of higher paying roles in the workplace. This fact is unlikely to change without paid parental leave policies that allow both the mother and father to take time off for childcare, the report states, meaning a slower climb for gender parity.

Chariot for Women, a ridesharing and taxi service for female passengers and drivers created by a former Uber driver, will launch this month, the Drum reports. Besides being strictly for women, the service is designed with extensive features that allow women and children to travel in safety, free of worry of an unwanted physical or sexual attack.  While some claim that a service that only allows female customers is illegal, it attempts to address the sexual assault complaints that Uber has been plagued by since its launch. Forbes notes that Chariot for Women may uncover an untapped market of taxi drivers. 19% of Uber drivers are women, but women make up only 1% of New York city taxi drivers, and it’s certainly possible that women may have been avoiding driving for car services due to safety concerns. According to the company, prices will be comparable to Uber and Lyft and users will have the opportunity to give 2% of their fare to the charity of their choosing.

How “Empowerment” Became Something for Women to Buy

“I Had So Many Advantages, and I Barely Made It”: Pinterest Engineer on Silicon Valley Sexism

A Roomful of Funny Women, Bonding Over the New York Comedy Life