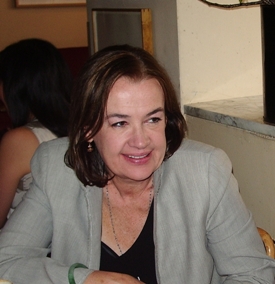 "One of my proudest moments was when someone accused me of being an engine of social destruction. I thought it was a great name for a band and I also realized what a compliment it was," MTV Networks Chairman and CEO Judy McGrath told me during our recent Lunch at Michael's. "The gift of our company, and of music, is that they keep you forever young and in touch with social issues and culture. Our networks are diverse, which threaten some people. It's eclectic and fun. I always want to be near people who are inventing pop culture and being responsive to social issues."

As her Cobb Salad arrived (chopped, mixed and light on dressing) and as Priscilla Presley chatted at the next table with CBS' Jack Sussman, Judy reminisced about sitting with her dad listening to Earl Hines, Sarah Vaughn, Count Basie, Duke Ellington, and Ella Fitzgerald. "He taught me about the power of personal expression in the creative arts. Both my parents were social workers and gave me a real sense of social responsibility, so I always think of music and social responsibility in the same sentence, and still believe music is a way to a better life." Judy remains committed to imparting those values not only to her own ten-year old daughter but to generations of MTV Networks' viewers around the globe.

When Judy graduated from Cedar Crest College near her home town of Scranton, Pennsylvania, her dream was to write about music for Rolling Stone magazine, but instead she landed at Conde Nast's Mademoiselle, where she was hired to write about food. "When they hired me, I was using my oven to store my sweaters. I'm the single worst cook on the planet. For years, when our doorbell rang my daughter would yell 'the food's here,'" she laughed. "I was in the job for a few months and I turned in a story with a recipe that included 10 pounds of lard, a slight error, so they suggested I move over to fashion. I wasn't much better; I'd wear white shoes with black stockings." But it worked well enough for Judy to become Senior Writer and to move to Glamour as Copy Chief, where she spent four years "editing stories about model's party tips and why some women like men who don't like women and why."

In 1981, Judy was organizing her resume and portfolio to again approach Rolling Stone but two friends who worked for a start-up TV company called The Movie Channel told her about a new cable network they were planning called MTV. "It was November 1981 and the channel had gone on the air in August. It wasn't available in Manhattan and I'd never seen it. I interviewed with (promotion director) Fred Seibert and took a writing test. I compared waiting to get MTV in Manhattan to Waiting for Godot."

"Fred offered me a job anyway," Judy smiled, "and promised he would rid me of literary pretentiousness. At Conde Nast, they had an established voice and point of view that had worked forever. We weren't there to challenge the status quo. At MTV I saw possessed people, an anti-authoritarian attitude and they were inventing something I thought might be fun. When I resigned at Glamour my editor told me 'cable is so tacky, MTV will never last.' But I was creatively oriented and the MTV crew were consumer oriented, and we were trying to find a business in the margins. Everybody loved music and saw the emerging power of music on television."

"Even back then," she continued, "I remember the conversations were always about brands. We knew that MTV needed to remain meaningful, even after Martha Quinn left, which was unthinkable… and that was very different for television identities… which were pretty staid at the time." Judy recalls working with The Who's Pete Townsend on a promotional shoot, and then-promotion director John Sykes (who is now developing new channels for MTV Networks) convincing an unconvinced Townsend to say "I want my MTV" on camera. "Pete would growl something else, and Sykes would say 'that was great; now say 'I want my MTV.' And the talent, inevitably, always did."

"We realized MTV was succeeding when Tom [Freston] called from Texas and told us Duran Duran, who had a video on MTV but wasn't being played on the radio, was selling out at record stores in the Texas towns that had MTV. And then we staged our first annual New Year's Eve Rock 'N Roll Ball on West 44th Street and we invited tons of people and they actually came. We walked in and there was Keith Haring, Jean Michel Basquiat, Bow Wow Wow and John Belushi. Together! There were people from the East Village arts scene, the music scene and the SNL crowd. There weren't that many places where art, culture and music came together, and there still aren't." A year later, Bette Midler and Dan Aykroyd hosted the black tie MTV Music Video Awards at Radio City Music Hall, where Madonna sang "Like a Virgin" in a wedding gown. "Fast forward ten years, " Judy recalls, "and young people were coming to work at MTV with the same feeling I had toward Rolling Stone. We became sort of like Oz."

Judy credits Seibert, Freston, Bob Pittman and several others for MTV's success, but especially credits "a lot of very good women who don't always get recognition for their contributions, like Marcy Brafman, Gail Sparrow and Joan Meyers. We were all part of a lunatic fringe that created a unique phenomenon." Today, Judy oversees the MTV Networks empire that includes 100 MTV networks globally, Nickelodeon, VH1, TV Land, Comedy Central, Spike TV, CMT, Nick at Nite, the new LOGO channel serving gay and lesbian consumers, MTV2, The N and MTV and Nickelodeon Films, and the company's online and digital businesses. She has succeeded in combining her passion for music with social responsibility through the award winning "Save the Music" campaign at VH1, the "Choose or Lose" campaign, "Rock the Vote," "Fight for Your Rights" series, and pro-social initiatives at each of her networks.

She's equally active in the local community, serving on several boards, and Judy and her husband Michael Corbett (they're from the same hometown) are especially involved in and passionate about the work being done by their daughter's school, the Stephen Gaynor School on Manhattan's Upper West Side. Developed for students with learning disabilities, the private family-run school is building a larger facility that will offer free after-school access to children in the neighborhood who require, but cannot afford, the school's services.

Judy acknowledges the challenges for the music industry today, noting "my ten year old daughter and her friends think music is free flowing out of a computer and, for them, personalization is a way of life. The N is the most brilliant new network we have because it reinforces that young people understand the world and have a lot to say about it."

Judy strongly believes "special interests should be represented in the mass culture," believes in Air America and "even Fox News," hopes Al Gore's new channel is successful, and is convinced new media technologies are empowering global creativity. In an "unusual" week during which she would see a taping of VH1's Storytellers with Coldplay at the Brooklyn Academy of Music, attend both the U2 and Bruce Springsteen concerts, and help honor Viacom co-chairman Tom Freston at a River Keepers' fundraising event with a special performance by Elvis Costello, Judy was glowing with enthusiasm. "I have the best job in the world," she told me.

Her personal tastes in entertainment tend toward the "literate and wordy" (a preference she called attention to by naming her Havenese dog Beckett). Judy "watches too much TV," her favorite recent movie is "Crash," and her musical favorites include Neil Young (all-time favorite), Lauryn Hill (one of the greatest records of all time), Nirvana (exciting and influential), Tom Waits, Keith Urban, the Shins, Ryan Adams, Mary J. Blige, The Arcade Fire, Jay-Z, Steve Earle and Public Enemy. Judy's musical tastes confirm she's stayed in touch with the cultural mainstream even as she's moved up the ranks at MTV Networks.

I'm sure she'd be proud to still be considered "part of a lunatic fringe" that's in touch with social issues and culture, possessed with reinventing television and media, and constantly challenging the status quo.

To contact Judy McGrath, send an e-mail to contact@mediavillage.com.