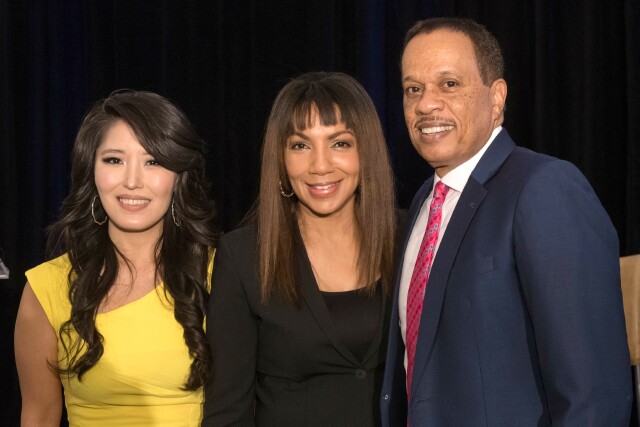 Last week in New York City content creators, producers, journalists and celebrities gathered for the first Multicultural TV Summit, presented by B&C Multichannel News.  The forward-thinking half-day event included panels featuring industry executives and news personalities and creators in insightful conversations on modern television, diversity in entertainment and the future of broadcasting and media.  It was all about the growing importance of cultural representation in programming.  As a twenty-something Latino journalist it was intersting to see what other multicultural Millennials identify with and what different companies in the media industry are doing to acknowledge us and attract us to their platforms.  At times it felt like they were coming late to the party -- those of us who are considered "diverse" have been reading, watching television, listening to the radio, browsing the web and engaging in social media as long as anyone else -- but the cumulative impression was positive and inspiring.

Negativity in the headlines and media was a big topic of discussion.  Williams, a co-host of Fox News Channel's daily The Five, tackled it with gusto.  “We would be very remiss if our stories did not reflect the tension and friction in the country,” he said.  He ruminated on how Generation Z, Millennials and Generation X are informed through different news outlets, some through newspapers, some through news networks and others through Twitter and Snapchat.  “There is such a tremendous generation gap in the U.S. audience, and you just can’t ignore the tensions that come with that,” he asserted.

When asked if the newsroom should and does reflect society, CNN Worldwide’s Escobar said, “I think you have to look like America if you want to cover America.  That’s a very easy thing to say but a hard thing to accomplish.  There is a tremendous amount of polarization going on, right?  But at the same time, we saw Black Panther become No. 1 for weeks on end.  We saw Coco win Academy Awards.  We even saw Despacito be No. 1 for twenty-five weeks – that’s twenty weeks too much, right?” he joked, as the audience laughed.  “We know we’re capable of being diverse and raising diversity because the business market tells us so.  Study after study shows that if you do reflect America, it will pay off.” 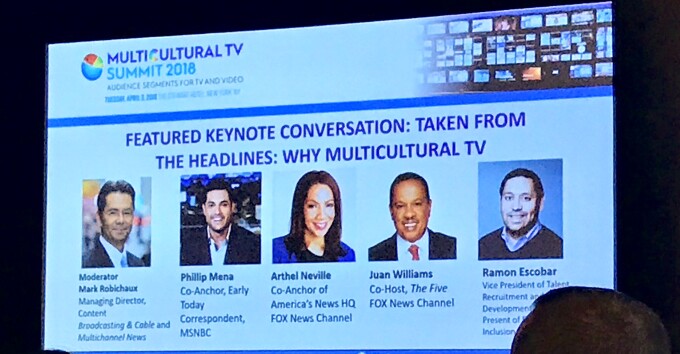 Ana Ceppi of Telemundo and NBCUniversal Hispanic Group was the first of four keynote guests and spoke on “Network Management and the Hispanic Market.”  Reminded by moderator Mark Robichaux of B&C Multichannel that studies show “71% of bilinguals choose to watch Spanish-language TV” and that, of the top six networks in this country, “No. 5 and 6 are Spanish networks,” Ceppi noted, “At Telemundo we find that to reach the target audience you have to have good content, regardless of the language.  All of our content is very much created for this Hispanic-American audience, to ensure that it resonates with them.”

Edward Chang of TDW + Co., a cross-cultural and multicultural advertising agency, was the keynote guest for “The Asian Perspective” -- and he had much to say on the Asian market and how different it is from other ethnic groups, like the Hispanic market.  Interviewer Court Stroud, Founder and Managing Director of The Cledor Group said, “The Asian market is among the most complex because there are over nineteen countries and even more languages and dialects involved, so it becomes complicated quickly.  India is not Japan and to lump both groups in the same label makes it very difficult to market to them.”  He’s certainly not wrong, as the majority of Latin America speaks Spanish while India alone has 22 official languages, including English, Hindi and Bengali.

Diana Mogollón, Senior Vice President and General Manager of Stage 13/Warner Bros. Digital Networks, spoke on “Content Development” for young, diverse viewers.  “They’re the most coveted and fastest-growing audience out there,” she said.  “We wanted to take a look at youth culture and get a fresh take on that.  We want to take a look fans of specific content and entertainment, whether it’s makeup and beauty, unscripted documentary style content, or the fandom around cannabis, or genres like horror or comedies.”

One of the most eye-opening keynotes of the afternoon for Millennials and Gen Zers alike was “Consumer Research and Metrics” led by Michelle Auguste, the Vice President of Research at Fuse Media.  She gave a presentation about various case studies on Millennials, focusing on their self-identity and how it is impacted by the media.  A “word cloud” was displayed onscreen, comprised of several key phrases and words that young people use to determine identity.

“The bigger the word is, the more important it is to their self-identity process,” she said.  “The top five traits are values, passions, what I’m good at, hobbies and relationships.  This was consistent with multicultural Millennials and Millennials in general.”  Ironically, social media was among the smallest of the terms, showing that Millennials do not consider the several apps on their devices to be a part of them as Gen Z tends to believe.

Television host Evi Siskos of Telemundo took the stage as the final celebrity host, addressing the importance of events like the Multicultural TV Summit to all generations.  “I hope everyone in this room understands the impact that multicultural television makes, not just in the U.S. but around the world,” she concluded.