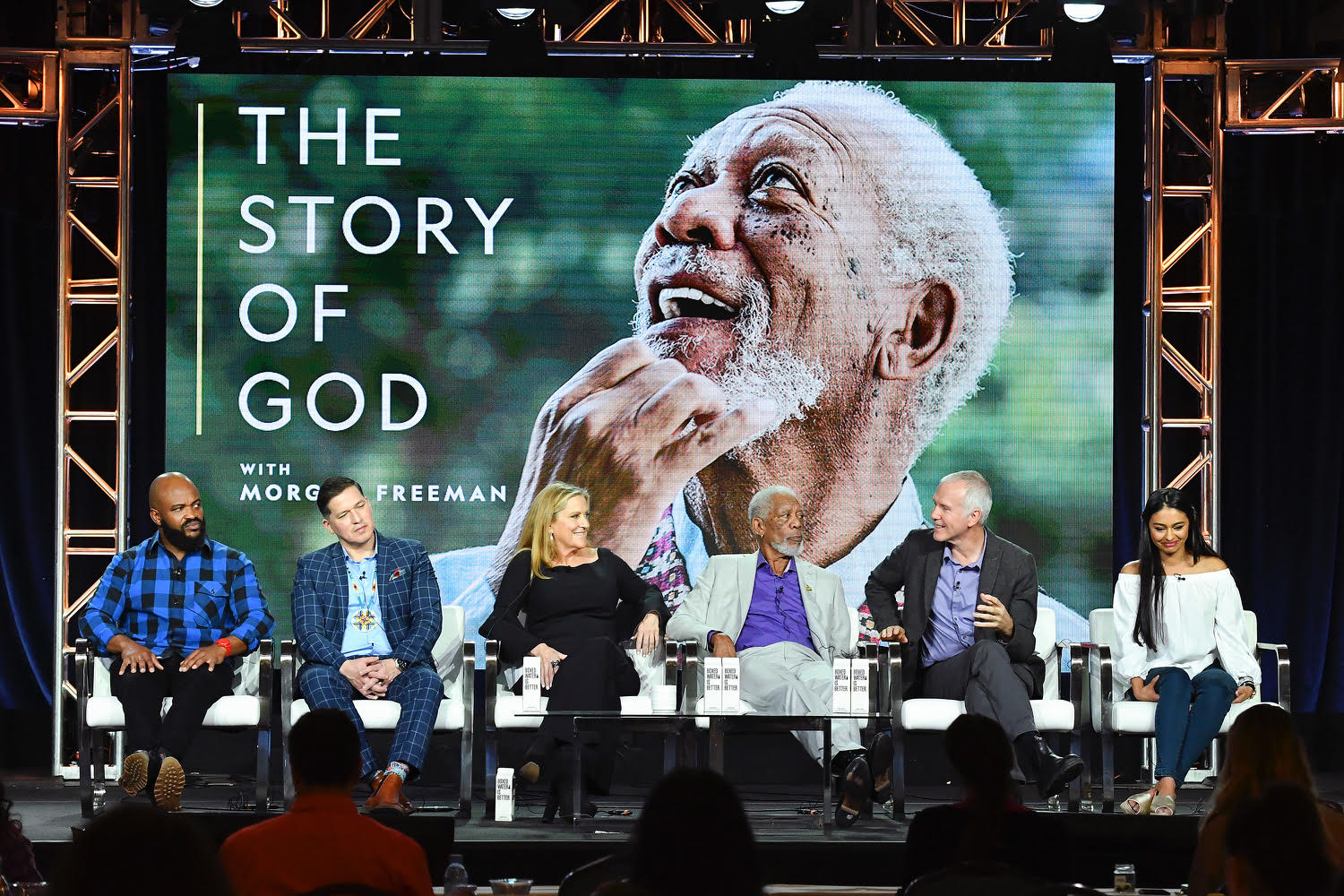 Pasadena, CA – National Geographic’s half-day at the Television Critics Association embodied the network’s mission of further by weaving that concept into each panel.  Some 200 television reporters from North America were wowed by high school students who undoubtedly will be running the world, terrified by the resurgent Ebola virus, challenged by Morgan Freeman as he explained that he is God, horrified by animals’ gruesome deaths and reminded of the fascination the country once had for space exploration.  They were even treated to a glimpse of the International Space Station as it (coincidentally) passed over the terrace at the Langham Pasadena Hotel and Spa during the network’s cocktail reception.

Courteney Monroe, CEO of National Geographic Global Networks, began the day talking about the upcoming third installment of Genius.  MacArthur Genius grant winner Suzan-Lori Parks will serve as showrunner and executive producer on this project that will demand respect as the anthology series turns its lens on Aretha Franklin.  The previously announced subject, Mary Shelley, is still in development.

The network kicked off its panels with teens who had competed in an international science competition as seen in the documentary Science Fair, premiering on Nat Geo on May 9.  It has been garnering awards at Sundance and SXSW.  “We have Cristina Costantini and Darren Foster, the duPont Award-winning and Emmy-nominated directors of the film,” Monroe said.  “Fun fact: Cristina actually skipped her high school prom, with her crush, to compete in the science fair.”

Another of the network’s documentaries was presented a little earlier in the tour, because Alex Honnold, the intrepid subject of Free Solo, needed to get to Royal Albert Hall, London.  Good thing he did as the breathtaking film won Best Documentary at the BAFTA, which were held on the same day as Nat Geo’s presentations at TCA.  As Carolyn Bernstein, Executive Vice President of Global Scripted Content and Documentary Films at National Geographic, noted, it’s “the highest grossing documentary of 2018 in the U.K., one of the top 20 documentaries of all time in Australia, and has been honored with three Critics Choice Awards, three Cinema Eye Awards, an Ace Award for best documentary and a PGA and DGA nomination, among several other industry recognitions.” 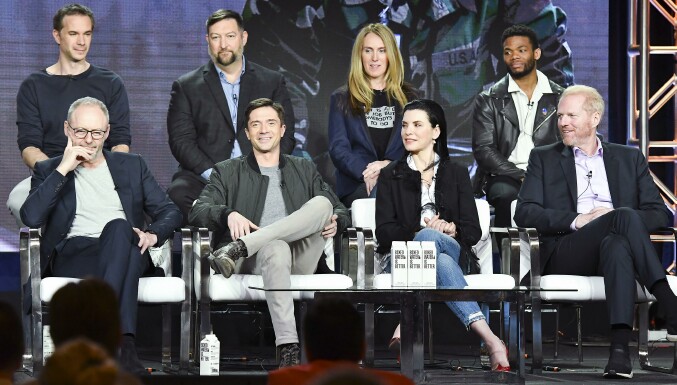 Nat Geo also previewed The Hot Zone, a three-night, six-part limited series premiering May 27 and starring Julianna Margulies (above, first row, second from right) as a U.S. Army scientist who puts her life on the line to prevent an Ebola epidemic. Inspired by Dr. Nancy Jaax’ story, the nastiness and speed of the highly contagious virus are shown.  Working on this left its mark on the cast.  “I definitely wash my hands more and am very aware of what I’m touching and where things might have been,” Margulies said.  “I now carry wipes in my bag.  I never used to do that.”

On a more spiritual note, another six-part series, The Story of God with Morgan Freeman, returns March 5. In what was likely a first for TCA, a Hindu priest recited a prayer for world peace as TV writers fastened yellow and red nadachhadi, scared entwined yellow and red threads, onto each other’s right wrists.  A First Nations Leader, Eddy Robinson, chanted: “Awayna-bojo, awayna-bojo.”  He then added, “In my language that means I want to learn from you and you can learn from me.  I'm going to respect you, and you can respect me.  But it also refers to our spiritual being and our creation story.”

Blueberry martinis were served in penguin-shaped shakers, as the day went from gravitas in the spiritual world to gravitas in the natural world.  Hostile Planet, a six-part wildlife series which premieres April 1, documents how incredibly tough animals have it.  Scenes where adorable penguin chicks have to jump off a 400-foot high cliff before they can actually fly – some of them splattering on the rocks below -- elicited screams from the crowd.  “Why would you show that?” one reporter cried out.

Bear Grylls, who hosts, observed, “What's incredible about Hostile Planet that's never been done before is that so many of the stories are so heartbreaking.”

Heartbreak led to wonder as attention turned to Apollo: Missions to the Moon.  Premiering in July for the 60th anniversary of the moon landing, former astronauts recalled the excitement of those days.  One of them -- Fred Haise, who spoke via satellite -- recalled deciding to leave his job as a test pilot.  “One thing that I realized was that mission of going to the moon and possibly walking on [it] was just too good to pass up the chance.”

The network then welcomed writers to a cocktail party with themed drinks of white Cosmos, The Apollo, and Orion.  Volunteers from the non-profit Planetary Society, which is based in Pasadena, set up telescopes so we could see the where Apollo 11 and 17 landed.  We could also see Mars, which, naturally, is … further.