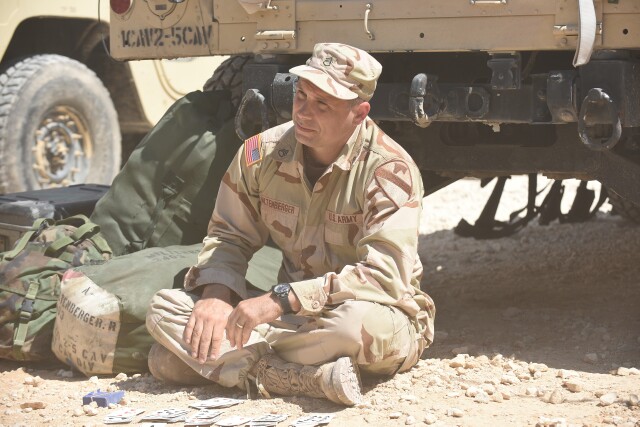 Fort Hood, TX -- The largest movie set in America has been built on the largest active-duty Army base in the country, deep in the heart of Texas.  U.S. Army personnel vet visitors before they arrive in what appears to be a Middle Eastern city.  The 113 buildings, many of them bullet-pocked, line narrow streets where burned husks of Humvees are reminders of a terrible day.  This is such a convincing replica of Sadr City, Iraq, that veterans who fought there walk around the set visibly shaken.  It’s that sort of dedication to accuracy upon which National Geographic has built its reputation.  The Long Road Home only adds to that luster.  The eight-episode scripted series premiering tomorrow night (Nov. 7) is based on the 2007 bestseller by ABC’s chief global affairs correspondent Martha Raddatz -- and it is one of the most powerful and important programs of the year.

The Long Road Home focuses on one day of the war, April 4, 2004, which began with the most mundane of assignments.  American soldiers were accompanying sanitation workers on their rounds.  They were ambushed, and by nightfall eight Americans were killed, as were hundreds of Iraqis. Over the next year, an additional 160 soldiers from the Army’s 1st Cavalry Division died in this battle. 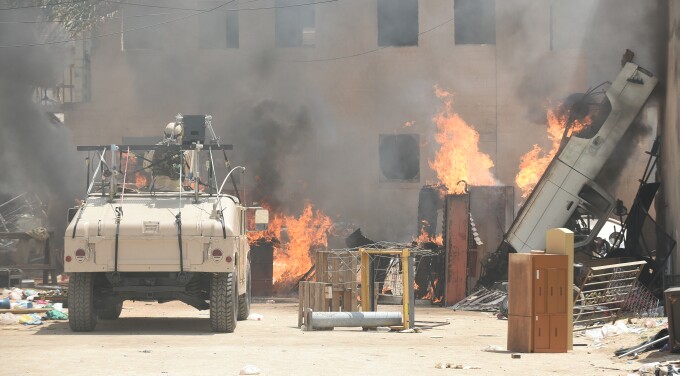 This is a drama series rather than a documentary, and a few minor liberties have been taken – there is at least one composite character, an Iraqi interpreter who helps explain how the two cultures clashed.  The series shares the perspectives of soldiers in Iraq and their families at Fort Hood.  In interviews in Killeen and Los Angeles, the stars, Raddatz, showrunner Mikko Alanne and Nat Geo executives all told me why this project profoundly touched them.

“He spent his time giving aid while being shot at and feeling very useless,” Jeremy Sisto (pictured at top) said of Staff Sgt. Robert Miltenberger, whom he portrays.  “It was at the end of a 20-year run and he was following orders, which is what you do as an enlisted man.”  As bullets rained down on them, Miltenberger ministered to three seriously wounded men while returning fire. This scene was recreated on an oppressively hot night as one day slid into the next.

Actors playing soldiers piled into a light medium tactical vehicle, essentially a pick-up truck without armored protection or even a two-way radio. Extras, posing as insurgents on rooftops, picked them off as if this were some obscene carnival game.

Back at base, commanding officers strategized over rescuing stranded men.  Michael Kelly of House of Cards plays Lt. Colonel Gary Volesky, one of those commanders.  “I could identify very much with that character,” Kelly said of Volesky, now a three-star colonel.  “I am a person who believes we are good.  We are all born amazing, wonderful, non-judgmental individuals.  It is what happens after that changes us.”

The hierarchy on base mirrors that on the front, so officers’ wives tend to be leaders, helping other Army wives.  Sarah Wayne Callies of The Walking Dead related to portraying LeAnn Volesky, as she married into a military family.  She wants this series to raise awareness about soldiers’ suffering after they return home.

“They are not all on the battlefield but the battlefield is still in them,” Callies explained to me.  “I want people to take away a total devotion to healing our veterans.  It’s an American issue.” 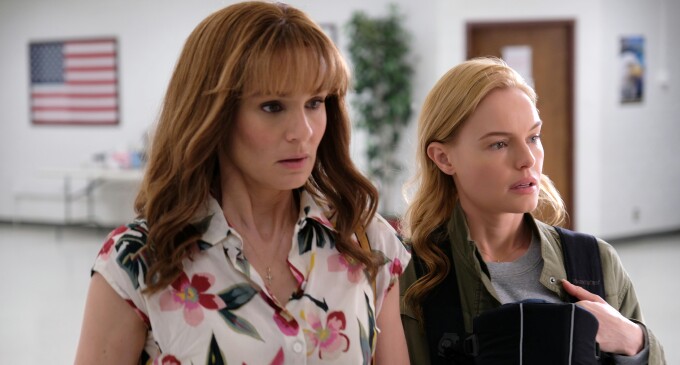 Callies (pictured above, left) shares scenes with Kate Bosworth (right) playing Gina Denomy, Capt. Troy Denomy’s wife.  Bosworth marvels at the women’s support system.  Only they truly understand what it’s like to pray that an Army chaplain is not going to ring your doorbell.  Bosworth teared up when recalling Volesky’s opening quote in Raddatz’ book: “Some guys have seen things no one ever wants to see.  I understand now what it means when you go to a veterans’ ceremony and you see the old veterans get together and hug and cry, and you never really understood it.  I understand it now.”

Bosworth’s onscreen husband, Jason Ritter, exhaled slowly as he considered those bonds forged in war. “It’s an incredible eye-opening experience,” he said.  “What I didn’t understand on an emotional level is what that brotherhood is.”

Seeing that brotherhood in action might lead viewers to assume this is strictly a war story.  After all, some 5,000 detonators were used to spark explosives and everything looks very real.  But the realism at the heart of this are the guys – the grunts -- often ignored.

“Their stories are particularly relatable because they are lot more like you and me and the average viewer than the kind of soldiers you meet in other media,” said Carolyn G. Bernstein, National Geographic’s Executive Vice President for Global Scripted Development and Production.  “The term unsung heroes is bandied about too much but in this case it really applies in a big way to these guys.”

The Long Road Home was a long time in getting to screen.  Nine years ago legendary producer Mike Medovoy (Apocalypse Now), himself an Army vet, approached showrunner Alanne about turning Raddatz’ book into a movie.  They waited for the right time.  “This is the golden age of storytelling for television and we thought maybe we could find a network partner who would be interested in expanding it into an eight-hour series,” Alanne told me.

Of the thousands of stories Raddatz has covered during her 40-year career only this one sparked a book. She kept returning to Iraq and remains close to these veterans and their families.  “People need to see that the people who volunteer to serve do it for us, do it for each other and do it for their own families,” Raddatz said, adding, “and make a sacrifice that people cannot even fathom.”