Nat Geo Premiere Event for "Genius: Picasso" Was Itself a Work of Art 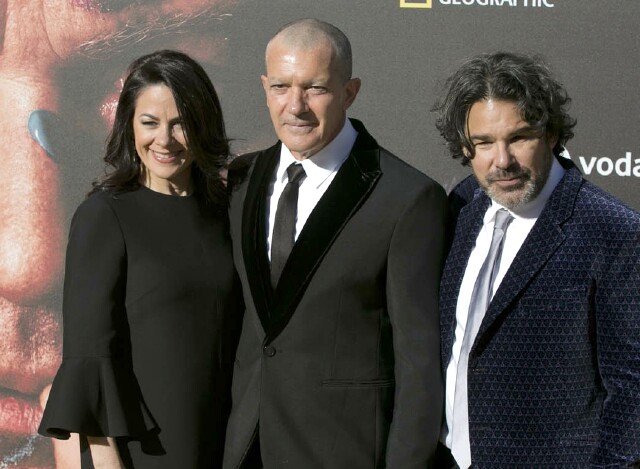 Málaga, Spain -- It was a scene made to be painted.  A quarter-moon waxed over an inky sky and under it tall palm trees swayed on the boulevard next to the beach.  Just beyond that the Mediterranean Sea was nearly still.  The night of Thursday, March 22 belonged to Pablo Picasso, Málaga’s most famous son.  The exquisite coastal town’s second most famous son, Antonio Banderas, plays the painter in National Geographic’s second season of Genius: Picasso beginning April 24.

The pilot had its world premiere in their hometown at the Teatro Cervantes, a pale-yellow building from 1870.  Gilt wreaths and leaves adorned each box of the four levels above the orchestra.  The ceiling alone is a work of art with ornate oil painting, on which is emblazoned: “Honor A Las Bellas Artes” (Honor to the Fine Arts).

In Málaga, art is revered.  And here, the audience gave Banderas a hero’s welcome.  He is not a prodigal son.  Rather, Banderas keeps a home in town, on a busy square, and participates in Holy Week.  Though Banderas is very much an international movie star, his roots in this Andalusian city are as the son of a police officer and a teacher. 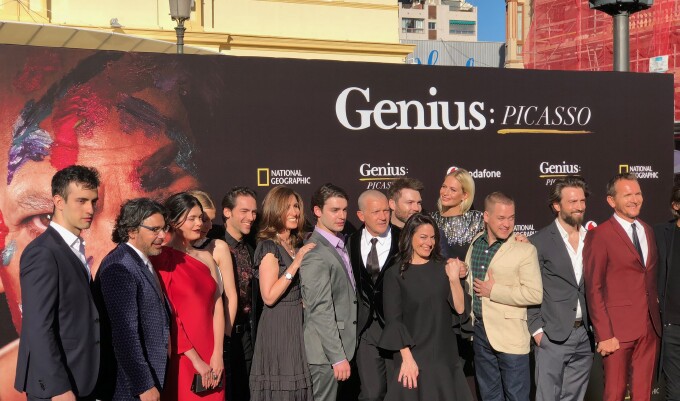 Introducing Banderas and the pilot in this storied theater, Courteney Monroe, CEO National Geographic Global Networks, with a translator next to her, welcomed everyone.  Later, she told me that of all the speeches and presentations she has ever given, this was a first.  Monroe explained how the first season of this anthology series from producers Ron Howard and Brian Grazer, created by showrunner Ken Biller, had been the network’s best-received show.  (Monroe, left, and Biller, right, are pictured with Banderas at top.)  Season one of Genius, about Albert Einstein, garnered 10 Emmy Award nominations, as well as multiple nods from the Hollywood Foreign Press (Golden Globe Awards) and the Broadcast Television Journalists Association (Critics’ Choice Awards). 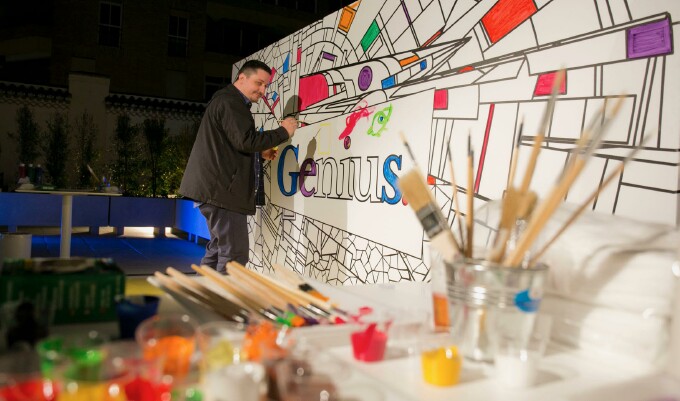 This is a complete story, following Pablo Diego José Francisco de Paula Juan Nepomuceno Maria de los Remedios Cipriano de la Santisima Trinidad Ruiz y Picasso from his birth on October 25, 1881 to his death on April 8, 1973.  The 10 episodes chronicle the prodigy who recreated masters when he was a youth.  Just like with Genius: Einstein, two actors play the title role; Alex Rich portrays Picasso from 17 to 40 and Banderas from 40 on. Both actors had their heads and eyebrows shaved to accommodate different wigs and makeup and wore the itchy wool slacks and stiff corduroy suits of the times.

On Wednesday, when the pilot was screened for Spanish journalists, and Thursday at the world premiere and glittery party that followed the actors looked more like themselves.  Rich was a dandy in a cranberry velvet dinner jacket on Wednesday; on Thursday night Banderas wore a tux with black velvet lapels.  (The premiere also served as a global press junket with more than 75 journalists from around the world in attendance.)

Speaking in a lyrical Spanish, Banderas, who was often on set at 2:30 a.m. to start the aging process, thanked everyone.  And on this evening, when the role he was born to play was finally being shown to the people who arguably know the most about Picasso, Banderas looked nervous. Ultimately, all was perfect.  It’s not as if this audience would be fickle.  Rather, where Picasso is so important -- and his influence in Málaga cannot be overstated -- had National Geographic erred, this is where it all could have gone down in flames. 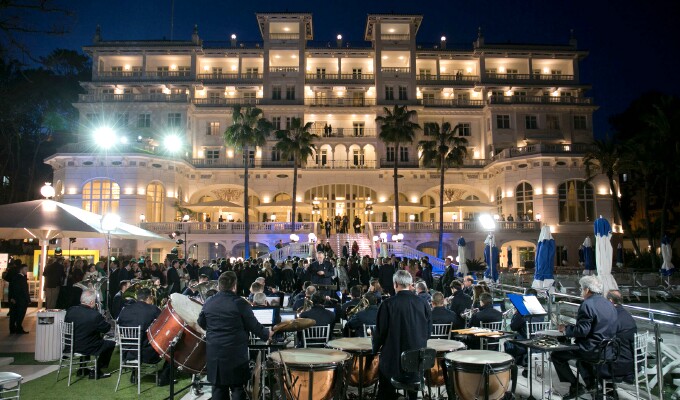 Instead, a standing ovation and lightning-quick Andalusian clapping greeted the actors.  Banderas looked relieved, the others looked thrilled.  From there, guests returned to the Gran Hotel Miramar Málaga (pictured above) for a party that could inspire a painting.

With the Mediterranean stretching in front and the storied hotel with Moorish influences lit bright, the fête had a magical feel.  Lights danced on old trees, the long rectangle of a pool was illuminated green with delicate fountains in full spray.  Down a grand staircase, inlaid with mosaics, a 50-piece band played, a present from Banderas.  The Madrid-based party planners explained they are not professional musicians, but a municipal band that plays at town functions.

It was a cool enough evening that Samantha Colley borrowed Poppy Delevingne’s cashmere pullover and slipped it on over her red satin gown.  The two had become friends as Colley played Picasso’s muse and lover, surrealist photographer Dora Maar, and Delevinge played Marie-Thérèse, Picasso’s muse and lover, and mother of his daughter Maya.  In the series, the two have a fistfight.  On this night, it was nothing but hugs.

As waiters ferried trays of champagne, a DJ from Marbella, Spain mixed tunes.  Two men and two women wearing little more than cubist-inspired body paint struck poses.  It was 8 p.m., and they had begun getting painted (including their hair) at 10 a.m. 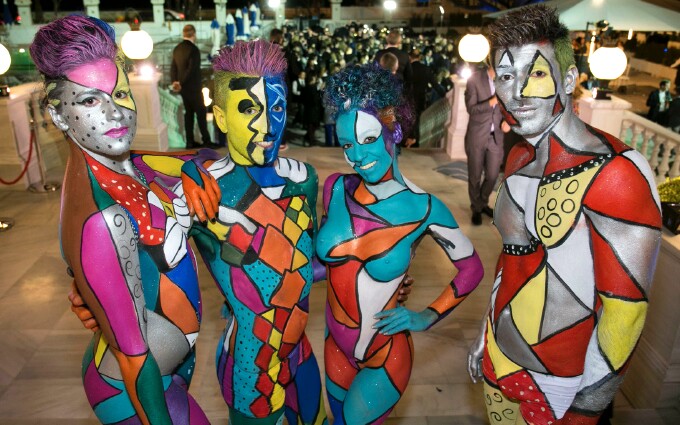 Party guests also struck poses framed by the iconic yellow rectangle allowing them to be on the cover of their own National Geographic magazine. Guests also were encouraged to pick up paintbrushes, don smocks and decorate a canvas that said “Genius.”

As waiters offered cheeses, dried fruits, Jamón Ibérico and other delicacies, three female flamenco dancers in black with white ruffled trim tore up the stage while one man partnered them.

People lingered at the party as a giddiness tinged with melancholy settled on the guests.  They were reluctant to part after working together for months in Spain, Budapest and Malta.  And except for upcoming press events, this was the end.

But what a finish!  Under that crescent moon, with the hint of orange blossoms wafting over them, they hugged goodnight at a party that should have been captured on a canvas for the ages.